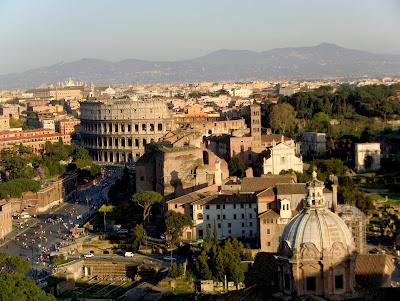 “Let us not forget that authentic power is in service.
Only those who serve with love are able to protect.”
--Pope Francis I

Those of us who’ve never actually been to Italy,
still seem to think we know a lot about it, probably
from watching olive oil commercials, or our
exposure to Catholicism, Michelangelo, De Vinci
and/or the Roman Empire, holy & otherwise, from
Caligula to Mussolini, from Spartacus & the Servile
Wars to pedophile priests with their boy harems;

from that first wondrous bite of pizza, oh yeah,
from the tower of Pisa to the power of Pizza,
even though I have read/heard that authentic
pizza is mostly just crust & sauce, which seems
silly, and authentic lasagna has no meat, which
seems to be sacrilege.

from one of my best college memories, prompting
me to become a History minor, when a dynamic
professor taught lessons on the unification of
Italy by the Zapata-like leader Guiseppe Garibaldi,
and how ironic it was to see that the proud well-
trained Roman legionnaires degenerated into
the pitiful ineffective clown-soldiers of WWII;

from the fact that there have been 266 holy fathers
in the Catholic Church, from the Borgia pope,
Alexander VI to our latest, the controversial
Argentinean, Francis I, who just six months
into his papacy has already stirred up the
ecclesiastical pot by clearly speaking his mind
on the world’s financial woes, gays, celibacy,
pedophilia, immigration, contraception, chemical
weapons, women priests, & church corruption--
you go, Pope Daddy;

and of course from Italian Cinema, neo-realism,
Italy through the eyes, lenses, & hearts of Fellini,
De Sica, Antonioni, & Leone as we experienced
both the joy of flying without planes in our dreams
to the ecstasy of enjoying the earthiness of
Loren, Lollobrigida, & Magnani;

learning  to say a capite ad callem--from
the head to the heel, being able to see on maps
that Italy is shaped like a great boot kicking
the butt of Sicily, the largest island in the
Mediterranean, that the island of Sardinia
is mostly majestic mountains that have risen
out of the sea, that Italy is a land of mountains,
the Alps, Dolomites, & Appenines;

that the lovely names of Italy’s greatest cities
roll off our tongue effortlessly--Rome, Milan,
Naples, Genoa, & Venice--ah yes, Venice,
which most recently, thanks to CNN, we can
relate to even more now as we are informed
that the oceans of the earth are rising, & there is
proof that New Orleans will partially be under
water in 20 years, which makes me wonder

just how filthy will the new American canals be,
and if New Orleans becomes the new Venice,
will the new gondoliers be Cajun or Creole?

ay yi yi....nawlins under water....imagining it pretty nasty to be honest with you...what a romp through history in this...garibaldi, we taught about him last year in world history...i have never been so i hope my imagination is not a disappointment when i finally do...smiles.

It's amazing how much we all know about such a young country... and what have we seen.. pizza ... and gay bashing pasta, and I love the new pope being controversial... (to me he is less so than some of his predecessors).. and still the tragedy of Venice..

Thanks for this little tour. I just love Italy--I have not been so much, but am always happy there -- or at least remember it that way--thanks for detailed revel. K.

Glenn, I enjoyed all of your comments on Italy...which tweaked my own remembrances. Ha, I took Latin 2 years in high school. (Wish I had taken something more speakable - LOL) It does not surprise me that you are a history major. There surely IS a lot of history to be learned by studying Italy over the years.

I enjoyed the voyage through time, geography and Italian culture. I agree that this new pope is an unexpected good surprise.

Glenn, your social/history tour of Italian civilization was a always informative, interesting and reserved that twist for the end to bring it all home. >KB

It's true, we all have the impression we know Italian culture, just like many parts of the world feel they know American culture from TV series and films. In both cases, parts of it live up to the stereotypes, and parts are very unexpected.

You have engraved the various shades of this fascinating country so well in your words. A lovely write... so many topics raised. I certainly enjoyed your free flowing verses.
:-)
-HA

What a journey! I've been transported back to my Latin learning days at school - which were in fact a joy for me - where we learned the history as well as the language.

ha - smiles.. when i visited venice about 25 years back, the canals were filthy as well... venice is very touristic but think i have to go back again and look at it with new eyes... i loved tuscany...the food, landscape, people -- and rome of course -- rome is -- no words can really describe her... smiles

I wish I could go there.

Glenn, wonderfully written. Makes me want to go there again. Thank you for the great trip!
~Miriam

Bravo! Bravo! This is very good, like a good chat on a cool topic!