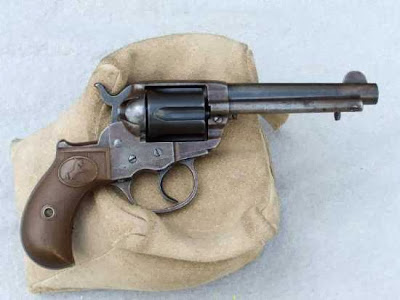 “Human brutes, like other beasts, find snares & poison in
the provision of life, and are allured by their appetite of
destruction.”--Jonathan Swift

1(sound cue) cello and harmonica duet.
2(medium wide-shot) the false front of Wallace’s General Store.
3(dolly in to the large front window on the left) where the bright
calico dresses & cattlemen’s denim shirts hung starched on
several mannequins sent all the way from Chicago.
4(medium shot) a storekeeper appears; short, silver-haired, stoop-
shouldered, wearing a clean white shirt, a red bow tie &
a black vest, adjusting one of the new dresses.
5(cut to reverse medium shot) inside, behind the storekeeper,
him partially in stark silhouette as the morning sun rays
shaft through the glass.
6(sound cue) banjo & clarinet.
7(panning shot) away from the storekeeper as we see that the
establishment is well-stocked with frontier merchandise, high
shelves against the walls, stick candy, boiled eggs in tall jars on the
counter, the black & gold keys on a brass cash register gleaming,
barrels & tables neatly stacked with tempting new goods.
8(medium close-up) several sun ray shafts with dust dancing in
them, with a large white long-haired cat lying on some folded
blankets, its blue eyes blinking, its tail twitching.
9(sound cue) six-string guitar slide fading into the storekeeper
whistling a popular tune.
10(cut to a medium shot) traveling back to the inside of the store
window, where people are beginning to stir outside--wagons,
riders, pedestrians, kids kicking cans. Through the dusty glass
Buck rides into the frame, dismounts in front of the store, ties
off, & heads toward the front door.
11(sound cue) heavy boots on wooden steps, then crossing
the puncheon boardwalk.
12(medium shot) Buck entering the front door, his tall frame
filling the doorway.
13(sound cue) small bells on a string jingling.
14(medium shot) the storekeeper glancing up from behind a
table where he was sorting bolts of cloth.
15(2-shot) Wallace: what can I get for you, big horse?
16Buck: I need a few supplies.
17Wallace: You have a list?
18Buck: Sure do--handing the storekeeper a folded-up
cattleman’s journal cover with the list written in pencil
on the back of it.
19(medium close-up) Wallace putting on some half-eye
glasses, then reading the list of wanted provisions.
20(2-shot) Wallace: Yeah, I think we can find these things for you
--but do you have a few minutes?
21Buck, his brows knitted, his mouth a tight line.
22Wallace: I’m always kind of busy in here first thing in the morning,
and we’re packing up some orders for other customers right now.
23(sound cue) piano fading into a dog whining.
24(medium close-up) Buck’s black dog with its face at the window.
25(voice-over) Buck: there you are.
26(2-shot) Wallace: will that be alright?
27Buck: no problem, just pack it in a sack and toss it over my saddle;
mine’s the roan out front.
28Wallace: can you find something to do until then, we got some
coffee & biscuits in the back.
29Buck: no thanks, Pard, had some vittles at first light--but you
might throw my old dog a bone if you like; just don’t get too close
to him--he can be a mite touchy.
30Buck hands the storekeeper several silver dollars: will that
cover it?
31Wallace: more than likely; pick up your change when you
return. You know anybody in our fair metropolis?
32(sound cue) saloon piano.
33Buck: not any more--but I’m drier than a tumbleweed & I do
need a woman.
34(Close-up) Wallace: a wry smile curling under his large white
mustache--there’s two saloons in town, mister, both have what
you need. If you like Mex whores, there’s Pedro’s Cantina at the
end of the street, but most of the real sluts work over in Bronson’s
place across the street.
35(sound cue) a sweet harp plucking.
36(2-shot) Are they all pigs?
37Wallace: I’ve never seen a woman yet, who sells her ass, that
wasn’t. Does it matter?
38Buck: not today.

Posted over on dVerse Poets #OLN

not today...what a cool interaction...on the surface could bear little meaning but it flushes out the character a little more which i really like...i like too that you are taking your time with this...

so how was the trip?

Ah.. I almost thought we had hit the end there.. but now life for Buck is back to normal almost... there are day when just the basics need to be filled.. have missed you a :-)

Glenn, I love these. Buck is certainly a folk hero to be. >KB

Interesting twists in this segment today, Glenn. Another riveting chapter.

you really do make me see this... a word movie that keeps on playing along... can't wait for the next scene!

Not today, guess not ~ Enjoyed this chapter Glenn ~

Visual piece to begin with but so much more life added by your reading.

Read like a skit off way off Broadway. Good flow.
Interesting effects.