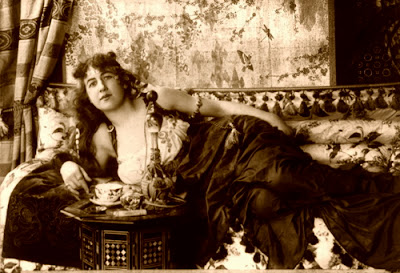 1(sound cue) French horns, deep low spurts.
2(cut to medium wide shot) the interior of Millie’s room.
3(sound cue) a couple laughing.
4(hold the shot) as the door opens; Millie enters the room,
playfully pulling on Buck’s hand as he follows her.
5(voice overs)
--Buck: did a cat piss in here?
--Millie: just the exciting smell of heavenly sex.
--Buck: I appreciate the bonus.
--Millie: no extra charge.
6(camera pans the room) a whore’s nest; one small dresser
with a stained knitted doily under a ceramic white pitcher
with blue Dutch windmills on it, alongside a large red bowl
& a crude bar of homemade soap--a worn red overstuffed
love seat, faded golden crowns & roses embroidered on
it, a fresh blue towel draped over the back, a half-bottle
of Kentucky bourbon on a small bedside table, accompanied
by two face-down shot glasses, with one large window
overlooking the roof outside above the alley, ancient red
velveteen curtains pulled closed, the morning sunlight playing
peekaboo in the slit between them.
7(sound cue) harmonica & accordion.
8(cut to an angle behind the bed) Millie, forcing a giggle, bends
down and scoops up two teddy bears, one black-one white, her
ample bosom flashing deep powdered cleavage. Buck is behind
her bolting the door.
9(medium close up) the stuffed bears being dropped into a
wicker basket.
10(hold the shot, cut to) a calendar on the red & black wallpaper;
depicting a herd of buffalo crossing in front of a train.
--Buck: why is it so damn dark in here?
What are we, fucking spiders?
--Millie: we certainly are not spiders, but I think there
might be some fucking going on real soon.
11(sound cue) guitar chords.
12(cut to outside the window) as we witness Buck opening the
thick red curtains & raising the window.
13(sound cues) the whooosh of curtain hooks on a rod,
and the heavy clunk of the window striking the top of
the frame.
14(cut back to the interior of the room) Millie stands with her
back to the camera, Buck stands with his arms folded, still
wearing his hat. She begins to untie, unsnap, & unbutton.
15(sound cues) perky violin accompanied by snaps & pops
16(reverse shot) Buck’s back to the camera, Millie facing him
full-frontal. She steps out of her black gown, tossing it onto
the toy basket, then quickly unbuttons her undergarments,
sliding them down & off.
17(medium shot) Millie standing very naked in front of him,
her long curly red hair cascading on her shoulders, her skin
pale white & freckled, her breasts lifted up, light- pink nipples
and tiny blue veins under more freckles, her small hands
on her wide hips, her genital bush a soft auburn.
18(sound cue) sweet violin & banjo.
19(close-up) her face; red-orange locks covering one cheek,
pale blue eyes twinkling, white teeth flashing between deep
red lipstick borders, clumps of cute freckles evident beneath
the make-up, powder, & rouge in the morning’s glare; almost
pretty, almost genuine.
20(close-up) his face, stoic, almost emotionless, but his eyes
seemed pleased with her nudity.
21(two-shot) her POV, over her naked back & shoulders, as
Buck tossed his flat black hat onto the floor, then pulled his
buckskin shirt over his head, his rock-hard abs flexed as he
dropped the shirt onto the love seat. He unbuckled his wide
gun belt & plunked it onto the cushions.
22(sound cue) snare drum taps & castanets.
23(close-up) the gun belt, coiled like a leather serpent, the
ivory grip of the Thunderer partially covering the bright brass
Colt .41 cartridges, the thick sawed-off caged & brutal.
24(cut to medium close-up) Millie very naked on a red quilt,
her plump arms behind her head, her milk-white breasts
drooping right & left.
25Millie: shake a wing, honey. You’re my first this morning,
& I’m dying for it.
26(sound cue) a cat screeching, a dog barking loudly.
27(several jump cut close-ups)
--her watery-blue eyes, partially closed, lids painted purple.
--a red flowered ribbon in her tangled locks.
--her breasts, large as hillocks, filling the screen, the nipples
erect, mere companions rather than a perky pair.
--her undulating stomach rippled with flappy rolls, twitching.
--heavy drops of sweat already forging trails in the powder.
28(medium two-shot) Buck sits on the side of the bed.
29(close-up) he fondles her left breast.
30(sound cue) Indian branch flute.
31(insert shots)
--a lone lover’s teepee beside a gurgling creek.
--a hawk perched on a meat drying rack, pecking at venison
strips.
--yellow wild flowers dotting the grass.
--soft white smoke drifting from the top of the teepee.
32(sound cue) a young maiden’s laughter.
33(close-up) Buck, his mind wandering.

Posted over at dVerse Poets OLN123

Would you like to hear the author read this Cinemagenic poem to you?
Posted by Glenn Buttkus at 7:32 AM

Love the symbolic painting of the love making.. really very much like a film.. her little teddy bears caught me...tender actually.

haha you know..i'm glad she didn't charge him extra for the smell..some sharp lines in here.. and good work on the details..

The classic fallen angel/soiled dove, Glenn. And the men were blissful for her.

Really good. The entire setting and the cascading images are really well defined. What I liked the most though are the musical references in between. :-) A delightful read.
-HA

Such a vivid scene... I love those shots at the end, their symbolism, poignancy, visceral implications. A word movie I can see, in every detail.

You always manage to keep us up in the air, Glenn!! The ending always keeps me returning to see what happens next.

Your writing is so visual. I couldn't look away.

Is the change in perception of Millie 17 and 19, and Millie 24 and 27 due to Buck's memory of the lone teepee's young maiden? Or is it the director's way of showing two sides (the temptress and the working woman)of a lady of the night? Interesting characterization.

I am going to read all of these, if - no when - I manage to find a couple of uninterrupted hours ... smiles

Promises, promises, Tony; glad you are liking them. The form is new, audacious & mine--but it takes some reader's adjustment to jump hip-deep into a poetic movie of the mind.

Glenn you really took us into a private, and yet oh so public, venue. Well done!