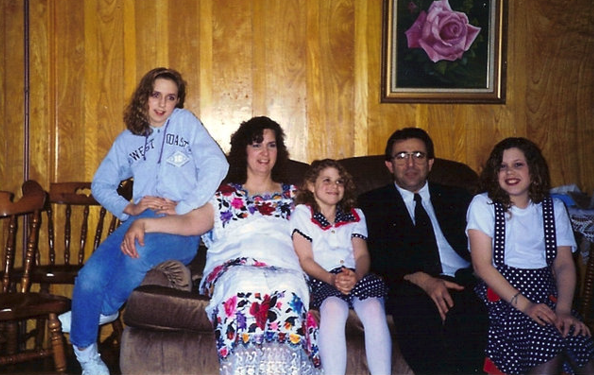 “Love is the emblem of eternity, it confounds all notions of time,
effaces all memory of a beginning, all fear of an end.”
--Germaine De Stael.

Just another Thursday morning,
waking up achey & stiff
with a pad of steel wool
in my dry mouth, my mind
still stuck partially in hypnogogic
review, fast-forward/backward dream slides--

my mother in the kitchen, dead
over 40 years now, but there baking bread,
as the house hummed with family;

five grandchildren,
three daughters,
three strapping son-in-laws
puttering around, fixing things--
broken chairs, swollen doors, burned out
light switches, because they knew this
was all stuff I was incapable of doing,
having the mechanical aptitude of a fruit fly.

My grandfather arm wrestling
with my stepfather out on the tile-covered
table in the corner of our large deck,
both dead, both grunting as their
massive biceps knotted, & their dislike
for each other furrowed itself
into their sweaty foreheads--

two dead dogs,
three dead cats,
all there lying about
enjoying the company
& the day;

replaced by the tick of time
from the clock near my head,
accompanied by the empty basement symphony,
the oil furnace whoosh,
the big freezer wheeze,
the industrial sump-pump gurgle,
the utility sink drip,
the damn dog barking next door,
& the strident pleading
of our Keezie Kat outside,
reminding me that it was time to feed him--

usually my sweet wife fed him,
for she still had a job, had a routine,
but this morning she was on Spring Break,
& besides she was in Maryland
with our oldest daughter, hugging
two grandsons.

Later I was on Facebook,
on her page, & I read the tender declaration,
praising her old husband for loving her enough
to send her clear across the country to be with
the furthest extremities of our clan.

Oh sure, I thought,
I’m a real prince;
just staying at home
writing more poetry,
reading the new script
of the play I will be in soon,
cat-sitting, feeling footloose,
buying a new set of radials
for my SUV as an anniversary gift;

and after polishing off another Jimmy Dean
breakfast bowl for one, I clicked open
my digital album & reviewed
some of our other anniversary memories,
the week on the big island of Hawaii,
the few days at the Oregon shores,
the freezing room at that strange B&B
near Mt. Rainier, smiling

at the memory of all the God-awful meals
we had in crappy restaurants while
heralding our special day, all the lumpy
beds we slept in at hotels & motels,
all those road trips, plane flights, & adventures
we embarked on in the name of our nuptials,
now representing more than two decades
of mostly harmonious matrimony;

marveling at how well
I was dealing with my solitude,
not really alone,
never alone again,
for her spirit, her essence
surrounded me, & even the old tomcat
seemed to know that
she would be winging home
soon.

Would you like to hear the author read this poem to you?
Posted by Glenn Buttkus at 10:51 AM

A poem filled with nostalgia, love, and memories. You really give a vivid picture of your family, including those who are no longer with you, animals included. I enjoyed all of the details you included...and how you so aptly wove them all together. Happy Anniversary.

hey - happy anniversary!!! 21 years - that is awesome... and cool conveying emotions through memory here..i esp. like the part with your mom still baking bread and even though not there anymore still right in the middle of all that's going on around the kitchen

21 years anniversary - wow.. Love how you find solace in looking at the old pictures.. After starting with the Facebook congrats I felt a little bitterness.. But it seems all right.. Cheers to you Glenn

Happy anniversary, Glenn! Thank you for sharing so much of your past and present, the people and things that make you who you are.

Very well done Glenn. It is hard for me to truly meld to it because my family life was non-0existent per say but you paint your well with your words. >KB

Happy anniversary - this is very heart-warming, and it's nice that all the dead members of the family (including the animals) came to spend the day with you.

This is so very good. Your descriptions of all the goings-on, both in your head and around you, create such an atmosphere that it's so easy to feel...a sort of oppressive lonely empty thing back-lit with a tinge of freedom.

I love the way you wrapped 21 years up in this, memories and past events and all the emotions that go into a life spent together. Just wonderful!
And Happy Anniversary!

Happy Anniversary! What a lovely round-up of your years together :)
A great warp and weft of history - what a tapestry!

I particularly like the image of the arm-wrestling foes. Congratulations, too ~

Gosh, the emotions could be felt tremendously when reading through slowly down. There were so many layers to just keep on going. Brilliant shot Glenn!

This was very sweet and brought a tear to my eye. Thank you for a sweet anniversary poem. Love you and see you soon.

Nice, Glenn, how you flow through your day of memories together...alone. Congrats to both of you!

smiles...its not easy having them gone...but sometimes it has to happen...glad you are keeping yourself company in the memories and the pictures g....thanks for stopping in today even though i did not link...appreciated brother...

Nostalgic magic, you are such a good husband! Your wife will be overcome with love when she comes home and reads it.

The art of heart must employ a paradoxical craft because intimacy is rarely eloquent, requires honesty and humility and nakedness, all of which art is confounded by ... So this poem which is specifically for a beloved (though on display here because its also a unique address) employs the craft to pack a dream, a life, a love and a present moment into this. The narrow ledge such poems have to walk is between artsy saying and gushy emoting, and you manage to steer deftly through the middle. What a dream. What an anniversary. What a celebration of a full heart with plenty art. That's a difficult place to stay in, for sure.

Wow! You took us along on that relationship ride and allowed us to feel the nuances of emotion, memory, connection, loss.

A lovely tribute to your wife and family (past and present)on your 21st anniversary. Congratulations on a nice life, Glenn.

Well, Happy Anniversary. I like how your memories filled the house.

So much going on here--very well conveyed--all those animal lives too. Thanks, Glenn. k.

You gave us a lot of your "real life" here Glenn. I followed you around that kitchen smelling the animals, feeling the love, seeing your memories, holding your hand, knowing things about you that I wouldn't have discerned prowling around your superhero lyrics, and your derringdo western scenes. I like knowing the tender you. This challenge brought the reality out of all of us, I think. Well done, much enjoyed!

Happy Anniversary. Thank you for taking us on this nostalgic, breezy journey. It felt like everything wonderful about being alone with your thoughts and memories, without the sting of actually being alone.