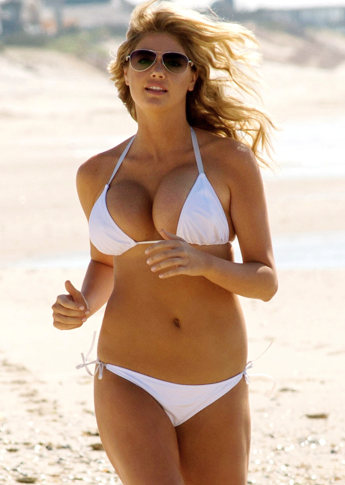 “Good news is rare these days, & every glittering ounce of it
needs to be cherished, hoarded, & fondled like a priceless
diamond.”--Hunter S. Thompson

Lovely Kate Upton, model & actress, knows
after doing a Sports Illustrated sexy pose,
that running in slow motion in the surf
in a white bikini gives men a visual kerf,
while comparing her to Bo Derek,
binding them together in a carrick;
both of them obviously a ten,
& that’s not just for the men.

I love it that our dear Pope Francis
is taking some personal chances
by cold-calling Catholics world-wide;
sweet condolences if someone died,
canceling a magazine subscription,
causing traditional cardinals a conniption--
all because old Frank is a true mensch,
& he must his conscience fully quench.

Kate Middleton was recently seen
doing something low & mean,
wiping off her son’s royal drool
on her dress while at the zoo;
damn, people need to get a grip,
cuz being a real Mom is so hip.

I do have to admire George Clooney though
at dinner in Vegas with Steve Wynn,
creating quite the heated contentious din,
despite all the casino owner’s dough,
George stood up & called him an asshole,
for slandering his pal Barack Obama,
like telling him to go screw a llama
in front of nine shocked friends;
so later he may have fences to mend.

Posted over on dVerse Poet MTB

Would you like to hear the author read this Dagsvers poem to you?
Posted by Glenn Buttkus at 9:32 AM

Love them all 4. Especially the Kate Middleton one.. A commentary on the stupidity of celebrity journalism is excellent .. Really you have taken this to your heart ;-)

ha. people def need to get a grip...the things that make the news are ridiculous....its entertainment...whatever moves the agenda forward....we made that shift a few decades ago....nice snark...

These are great! I don't know all of them, but yes, we really do need to get a grip. Fun poem! :)

These are great. I especially liked the ones about the pope and Kate. Can't say I'm a fan of those implants though in the photo. Nor is my husband, thank heaven.

yeah...sometimes you really shake your head about what stories make it to the news... i would hate to be so closely watched by reporters and that they make a big affair about every small thing

Yes, what passes for 'news' these days does make me shake my head so hard it could almost fall off... Well done, Glenn!

ugh... the shit that makes headlines is unbelievable, I swear... some celeb goes out on a dinner date; such & such has fallout with their maid... great poem Sir

Funny, topical, and cool. I read all this BS too. In the US they think we're stupid, but everyone in the UK reads it..they carry around two newspapers on the tube - a serious one and one with lots of drool. LOVED IT!

Agree with Anthony in that the shit that makes headlines is unbelievable - who gives a damn?
Love them all too.
Anna :o]

Well Glenn you certainly seem to hit all the bases. Like the Cloney one--but Bo was a much better '10'. >KB

What fun - particularly as I don't see your news, so apart from Kate M it was quite the revelation.

haha love the kate middleton one.

Great breakdown of tabloid and celebrity gossip! I'm not sure how I'd manage without knowing that George Clooney got offended by some other rich guy dissing Obama.

You skewered them properly!

love them all...specially the kate middleton one...and that's how the journos drool over the celebs...great take... :)

A real assortment of news items here! And a very funny Hunter Thompson quote to give with that pic. (I'm not sure that first one is "news" though.) Ha. K .

What gets my goat is that celebrititis grabs more headlines than real news.

Love the Thompson quote- one of my favorite authors, tragically gone.
Craftily worded.

PS- at first I thought you had posted a picture of my girlfriend... : )

Haha i loved the one about kate middleton and George clooney. It's hilarious :)