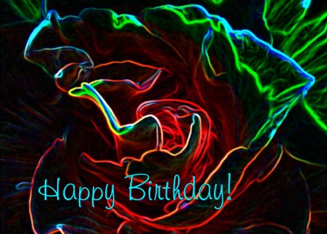 “Today you are you! That is truer than true! There is
no one alive who is you-er than you!”--Dr. Seuss .

You know, in a sense,
birthdays themselves are an anomaly,
for when you are born, as an entity,
you are already several months old,
& the parents that be label you as a newborn,
& start counting your age from that moment forward.
Hell, when we are actually two days old,
we are only the size of a lustful thought.

I have been single several times in my life,
& during those interim years my birthdays
passed by without even glancing up,
a tip of the hat, a smile,
or even the flashing of a middle finger.

I doubt that in June of 2044,
I will plunk my 100th chip into it, but who knows,
I might be that 100-year old bag of bones,
barely able to see, chew, or hear,
diapered-down,
hooked up to an IV,
spitting on everyone
as I attempt to blow out those century of candles.

it is interesting measuring our relative age by those around us...like stone cold...ha...I have not thought of him in forever...but not sure I realized he was older than me....pretty cool idea of your wife's about having a cottage with family...even just going by yourselves...its harder when family disperses across the country as well...and we don't always see them...birthdays alone do click by pretty fast...

counting every day as a gift... think that is the secret in all the ups and downs in life....Paul Klee would have been 135.. wow... i love paul klee... wish i could paint like he could...

Oh you kid. I was two when you were born, a senior when you were a sophomore, and probably had a baby by the time you finished college - maybe three. I didn't get my degree until '69. My birthday's in July. On the 23rd, a magic number that yields 5 another magic number and both primes. I feel as though all of us (and we are so many. Last night Paul McCartney was on The Tonight Show with Tony Bennett and Lady Gaga singing songs written around the time I was born and before - Cheek to Cheek. I thought about that Dallas boy Craig Wayne Boyd, meeting them, having won The Voice the night before. To think all that after nearly quitting Country music a year ago. What a star-cross! To meet Bennett and McCartney - to get one degree of separation at that point from the greats of the twentieth century from Louis Armstrong to Jimi Hendrix!
Life's a funny thing. It takes us along strange paths, and looking back they were miraculous. You shared a few of your miracles here, and many more of your miracles in the poetry you've written just this year. I feel like we're good friends who have shared some of our deepest thoughts even though we've never been face to face or "cheek to cheek" (smiles). Merry Christmas Glenn!

Part of my note got "eaten"! Ha!! To re-state: Please insert -
"I feel as though all of us(and we are so many) have so much in common and I love the way you filled in those commonalities with the birthdays/dates of the famous whose lives and fame tie us to our life and times."

Eee..I managed to delete my comment..so now I write again.. I think that we can only see our birthdays in relation to others.. this was a perfect way of putting things in perspective.. the famous birthdays gave a great background.. Interesting to understand that Mr Putin gave his giant ceremony for the press on Stalin's birthday...

This was such a fun and realistic dissertation on the meaning of birthdays. I liked how you interspersed the stanzas with the ages of famous people. In not too many days, I will be 71. The weird thing is, though my body might concur, there is no way my mind and spirit feels old. I'm fairly sure I won't make it to 12/43 for may 100th (because how long can a transplanted kidney last)? On the other hand, my mom is 94. Oh, it's all so relative.

interesting how you researched birthdays throughout... one is a lonely number

Wonderful meditation on the mysteries of history, rueful and wistful, idle and deep at the same time. Origins are important, it seems especially so as we lengthen toward our ends.

It can be a real effort to react to those candles at that age. It would be a bonus to be still around to savor all those goodness. Great lines Glenn!

I think this poem describes a triumph Glenn - and I hope I'm around to comment on the poem you write when you hit 100 !

Wow. Keith Richards is old. lol. Just kidding (kinda) Glenn, I loved the way you took us on a journey. Truly you are victorious if more thankful and humble each passing year. :)

Hmm.. i have what seems an inherent love and genetic memory for numbers.. so dates and times and birthdays as such always hold fascination for me.. and particularly i think it's fun to write about birthdays just like this....

And haha.. it doesn't matter how old i ever get.. i always still get a little look of surprise and hmm.. fear.. when the folks in my fundamentalist BIG RELIGIOUS TOWN SEE the 060660 birthday date..

on my driver's license as such.. and if you are GEMINI2.. I AM NOT A BIT SURPRISED.. AS i noted the June comment with a specific number of day to my dismay..;)

And haha!.. i am carded last night by a new door dude.. that seems to be a little too cautious about losing his job at the dance hall i frequent in floating and flying ways on terrestrial plane of YOUTH INSPIRED AND INSPIRING DANCE..

HE tells ME.. ya must be the devil.. ya can't be that old without at least making a deal with the devil.. but hehe.. this paragraph is just part of my imagination.. ha..! as with imagination and youth of spirit.. one truly never grows old...:)