The Litany of Leavening 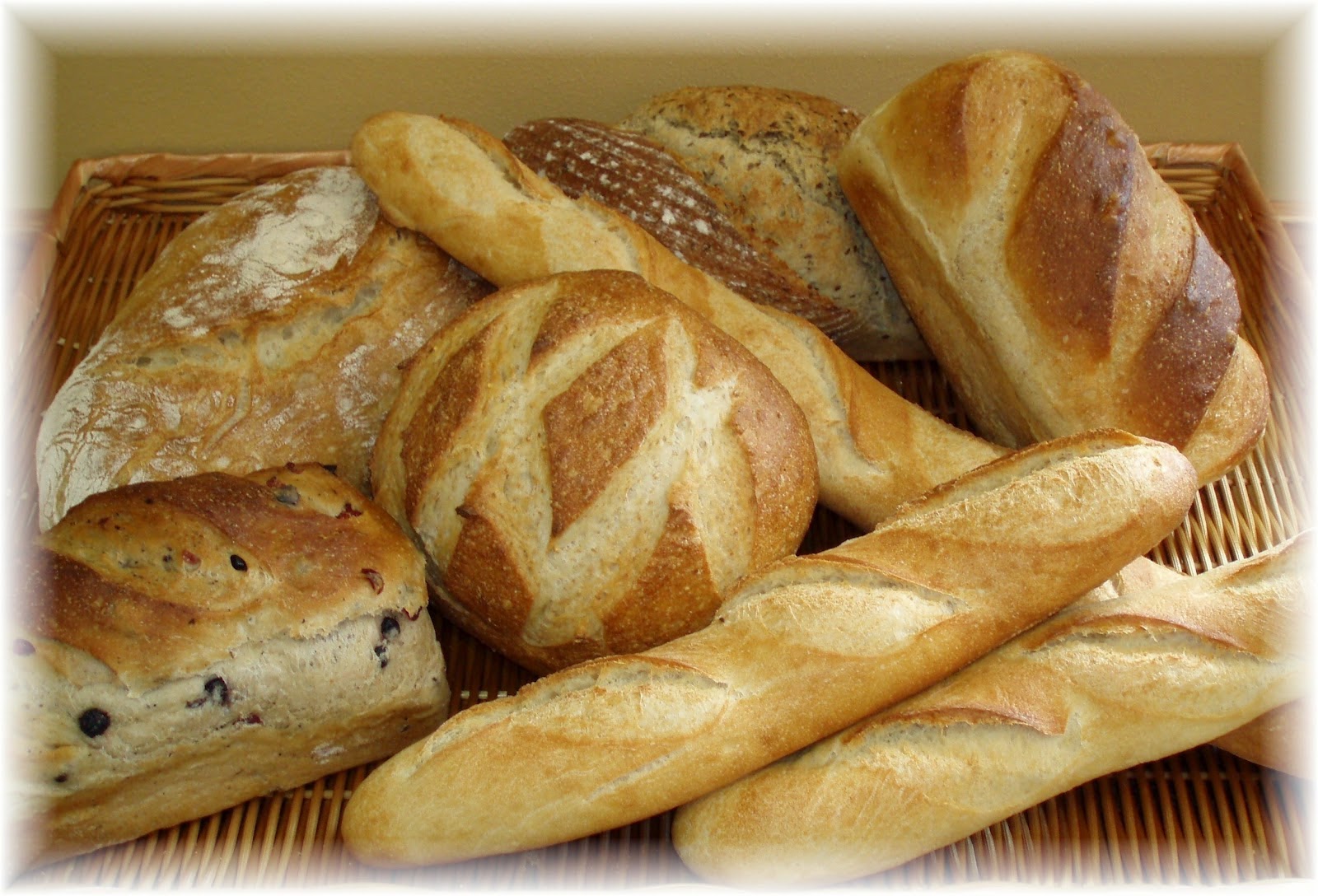 The Litany of Leavening

“There are people in the world so hungry that God
cannot appear to them except in the form of bread.”
--Mahatma Ghandi.

Bread is my bitch,
my staple, &
my bane--for eons ago my love handles
became a gut loaf, & I must turn a deaf ear
to the haranguing data that informs me of its
harmful properties, for
giving up bread for me is the equivalency for others
of giving up smoking, alcohol, weed, chocolate, or hard drugs,
making it my major addiction.

I remember clearly the first time
I met a person who was gluton-intolerant, OMG,
my sadness was overwhelming for them,
their depravation constituted tragedy,
they might as well have had diabetes, cancer, or leprosy.

How many people know
that Otto Rohwedder is the father
of sliced bread, that in 1912
he invented a machine that sliced bread,
& for those folks who felt this was a negative act
since bread tended to go stale faster after sliced, in 1928
he invented a bread wrapping machine,
making him kind of the Linus Pauling of bread history.

Part of the initiation of adulthood
was to gain a appreciation for unleavened breads,
after it became hip to eat the Mexican tortilla,
Middle Eastern pita,
Indian naan, chapati, or roti,
Jewish matzo,
or God help me the Native American fry bread
dripping in cinnamon & butter; which is a bit confusing
because I don’t know if the flour they use is leavened or not.

Bread scholars proudly point out
that as far back as Neolithic times
bread initiated a turning point in history,
offering agriculture as a viable alternative
to the hunting/gathering options, allowing larger
populations to congregate, & I find it
ironic that man moved from loving fermented
fruit buzzes to the fermentation of grains to make alcohol,
& simultaneously discovered that bread could be,
might be,
should be leavened;

My mother was a master baker,
& once a week was her Baking Day.
As a family we would all rush home
to greet that perfectly timed last loaf
as it came out of the oven. The smells
of flour, yeast, & baking bread, rival
the overwhelming smell of frying bacon
as one of my favorite sense memories,
constituting what a real Home once meant,
once was.

Mom would place the hot loaf
in the center of the table
on one of her beautiful wooden bread boards,
surrounded it with a pound of real butter
& several homemade jams & jellies.
We would tear off huge steaming pieces,
slather it with soft butter & sweet jam,
& sit together as a family breaking bread
laughing, smiling, chewing,
making butter/jelly mustaches,
talking with our mouthes full,
devouring the entire loaf in mere minutes,
in a frenzy, ravenous as starving dogs,
the smells, tastes, & fellowship
overpowering us,
overwhelming us,
mesmerizing & sustaining us.

Now that my mother is gone,
& only the memories of her Baking Day remain,
oh what I wouldn’t give
to come home just one more time
to perform the perfect Ritual of the Hot Loaf.

Would you like to hear the author read this Bread Poem to you?

Posted by Glenn Buttkus at 9:43 AM

Ah, my mother used to bake bread too, Glenn; and she would let it rise in front of old-fashioned heat registers. I just loved the smell, knew what would eventually result. Nothing like the smell and taste of fresh bread, is there?

We had a Sunday morning ritual. After church we would drive to a local bakery where they had HOT fresh bread on Sunday mornings. On the way home I would often have a slice or two of that hot bread in the car (No worrying about calories then. Ha.)

I, like you, really like bread. In restaurants, with the fresh bread baskets, I always have to restrain myself....and I love pita, tortilla, etc. too!!

I love bread too, making it and eating it. One of my favorite is Delia's Potato Bread with Goats' Cheese and Thyme. A ritual when I was growing up was tearing one small piece out of the fresh baguette. You still see a lot of people doing it when they exist the bakery. And I agree that cut bread goes stale more quickly, as does bread put in a plastic bag as opposed to a paper one.

I have a craving for bread too.. couldn't live without it.. Particularly the Swedish crisp-bread.. Sold in big round pieces you break and eat with butter and strong cheese.. No concern for fresh bread.. we just eat, baked with lots of rye. But freshly baked one is good as well... mmm..

would def be nice to come home to that smell...and those moments....especially when they are no longer possible...we do make bread though...and my does the house smell wonderful....

the gluton thing...i worked with a kid that when he went off of it, is behavior so improved...it was amazing the change...so, it is a reality....sad one, for some

oh that was really moving glenn... so cool if we could turn back the clocks and re-live certain moments again... i used to bake bread a lot when the kids were small..and yeah the whole house just smells divine...

What a great encyclopedic story of bread encrusting some significant truths. I've never had success baking bread (well, I've not had much success cooking anything) but do just fine consuming it.

Indian tacos on fry bread!!! The best ever!!! Glen you've made me hungry in-spite of my ample bread-box.

Glenn, I wrote about my mother baking bread too. I love the history in your piece that I was unaware of.......interesting about the reaction to sliced bread!I love the description of your after-school attack on the last loaf of bread with all the butter and jam. Sigh. Happy memories. "what Home once was". Yes.

A lesson, a memory, a series of images as universal and personal as they get. This piece bears your stamp, brother, and that's a big deal in my recipe book. Pax.

I almost forgot about Indian Fry Bread... one of the best things I've eaten... but the whole glutton free thing keeps me from indulging, but maybe, just maybe for the holidays!


"Ritual of the Hot Loaf."
Perfect! What a wealth of info in your poem. Wonderful.

Ahh I can taste this poem and have my own memories flooding back to me of my Mother's bread fresh out of the oven with butter and a sprinkle of cinnamon sugar.
Cheers!

I really enjoyed reading all about bread. I found it interesting about how in medieval times they thought white bread was better leaving the dark grains for the poor. That is really quite amazing considering today we know that the brown grains are healthier for you.

I had Native American fry bread topped with lettuce, tomatoes, and cheese. It was almost like fried dough but, a bit thicker. I went to a gathering and it seemed to be a big hit with people. I have not seen it dripping in cinnamon & butter.

All this bread talk is making be very hungry for a slice of warm baked bread.

A great ode to one of my favorite foods and a wonderful image to accompany it.

This has made me run out and get some fresh bread running with butter. Lovely imagery and descriptions in this poem - you have captured the tiny details so well. Leavening is something I do not really think much of

It does seem like the smell of bread fresh out of the oven does something to our mind - at least in the Western world, I don't think the rice-growing nations feel quite the same.
I love your journey from factoids to the very personal - learnt some amazing new things about bread. And no, I don' like mine sliced...

Glenn, I absolutely love your poem. You had me nodding from the start and never let me go. So many types of bread, so little time. Once again, the memories associated with bread and the breaking of it are key. I've always thought it ironic that at one time, white bread was for the rich. My, how times (and cost) have changed.

My grandmother made bread but also the most wonderful cinnamon rolls. Ahhhh, such sweet memories.

indeed, this is a wonderful tale. I never really thought about how bread has such a profound influence in the lives of many... My mom makes fry bread from time to time, we have it dripping with maple syrup and butter...

visceral bread: how memories of scent have so much more impact than just the visual. finely crafted, Glenn ~

giving up bread for me is the equivalency for others
of giving up smoking, alcohol, weed, chocolate, or hard drugs,
making it my major addiction

Bread is that serious Glenn! Very much like our feel for rice! Yes, it is not just an addiction but survival. But recently there is a rethinking though. Rice gets into being sugar and not good for health.
Am thinking also of bread now, brown bread so they say. Wonderful take!

I love this more than I can say. What an informative and beautiful celebration of bread. As I was reading it I thought how I would love to share it at Facebook, then I noticed that you are on FB....so I shall see about this.

Here are to the memories of those breads that warmed us and continue to enrich us. Happy Holidays to you, Glenn.

Cool essay on your feelings toward the glory of the loaf. I wrote of the same history you mentioned, albeit with fewer words.

Bread is undeniably a joy!

Starting from the history with your personal anecdotes, it's a beautiful piece Glenn - I have never done baking myself, but to see it in the making is a pleasure.

Ghandi's quote - have always tried to imagine being that hungry...
cool on the history of bread...
The memories of your mother's bread are touching; I have similar ones of my grandmother. Bread has always been my downfall, now sugar...yeegads, talk about overpowering cravings..and love the word sustenance for bread!