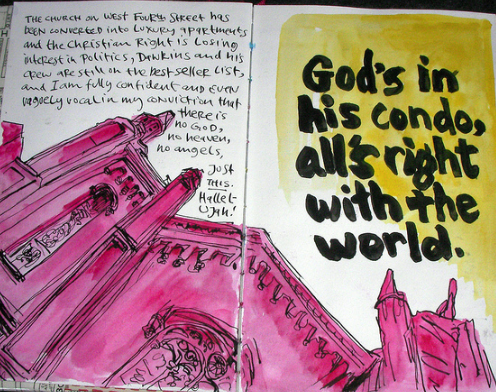 “There is no God, no heaven, no angels--
just this hallelujah.”--Danny Gregory.

Danny says     that the church on 4th Street
has been converted into luxury apartments,
& that is not surprising.       It is pretty spooky
to visit one of those huge cathedrals
after the aged congregation           has died off,
& the savvy youngsters have abandoned it,
sitting alone on a cold pew
in this cavernous structure, as big
as an airplane hanger, dwarfed by giant stained glass
windows & faded frescos on the lofty ceiling,
where footsteps echo like sledge hammer blows
on concrete,
where priests cannot hide         their sad eyes
and slumped shoulders, weighed down          by the stigma
of pedophilia, mired in the trappings
of the 17th century that no longer appeal to many.

But the whole picture, the lowdown on the
Almighty, AllThatIs, Good God Jehovah,
Elohim, Elah, El Supremo, Om, Gayatis,
Yahweh, Allah, Adonai, & Baha
suffers from the regional,
national,
familial mind sets, locked into place
during childhood, never offering clarity, logic, or truth,
substituting that with the faith of the ignorant,
mandating edicts, elitism, condescension, witch hunts, excommunication,
whippings, scourgings, stonings & beheadings,
fully supported & promulgated by Protestants,
Catholics,
Jews,
Buddhists,
Muslims,
Mormons,
Bahai, &
Hindu
to name just a few, with
God on one side, then the other,
as we become flotsam on the sea of chaos
while exercising our free will; allowing/promoting/
supporting/causing/or ignoring            the harsh reality that
Bad things can/do happen to good people,
that the media is saturated hourly
by the blood of innocents;

just this morning they are fully fixated
on the reported death of Kayla Mueller
at the cowardly zealous hands of ISIS,
(as I find irony in the fact that the Islamic
black battle flag always reminds me of the black
pirate’s flag with its skull & crossbones);

that the latest set of Crusades reflect
the deep-seated animosities & religious conflicts
that span 15 damn centuries;
that there is no big stick, panacea,
proclamation, edict, jihad or peace talk
that will make much of a dent
in the various Radical Islamic Terrorist’s
plots, missions, or plans--

as way too many disenchanted, impoverished, ignorant
denizens of home-grown Islamic converts
are pulled from their farms, suburbs & ghettos
& transported to the Middle East
to learn how to become holy warriors,
martyrs, suicide bombers, assassins & sleeper cells--

just as the killer of Chris Kyle stands trial,
shaving his head,         hiding behind his insanity,
as Clint Eastwood’s blockbuster film sweeps the box office
& his own son, Kyle,         plays sad jazz riffs
as tribute to the other terrorists           among us,
the carriers of PTS             (they dropped the “D” since disorder
carries a negative connotation),
as our wounded warriors search for normalcy
in the bosom of pain, too often seeking
succor & sanctuary within the religious beliefs
& institutions that, in part,          set them upon
the military road to begin with--

So, I certainly do not weep as churches
are demolished & replaced
by apartments, condos, & strip malls.
The staunch notion that God can only be found
in a house, cathedral, church, temple, or mosque
has always been tragically absurd.
I, for one, find Himself daily
in the bright loving eyes
of my own reflection.

Posted by Glenn Buttkus at 1:05 PM

Yes some of the churches are converted.... but I do think there are uses for churches still. The church has to expand its function, feed the hungry, give medical advice to the poor, disperse clothes to those without......I do think there are many places to find God, but He does not reside with Isis, I am sure. I enjoyed your reflection, Glenn. Perfectly launched off from Danny Gregory's sketch.

i agree with the absurdity that god can only be found in the building...i was talking to another blogger earlier on how we have gone from being created in gods image, to creating gods in our image...much of organized religeon is lost on me...there is power in gathering and worshiping together...but also there is room for that same message to be twisted into something else entirely...

I found your remark about ISIS's flag amusing. I too agree that God is not found in a building. Yet a community of followers might be glad to meet and find comfort in knowing they share the same faith. But then since they are only humans they can easily end up screwing up the whole thing up.

I agree that God is not only found in the churches & temples, He is where we find him, by ourself or with a group. And how ironic that more wars are made in the name of religion ~

And that is why I bow to the trees...

Even though we apparently come from opposite ends of the spectrum, I'm happy to find us in the same space at the end of this great, reflective poem.

I had to walk away for awhile to really be able to re-embrace (or perhaps embrace for the first time) the path that I was raised in.

Most of us who do choose to follow an organized religion agree that all too many horrible things have been done by those who profess a religion or use that as a guise for abuse. Religion is a means to an end, not an end in itself. It is rife with all that comes with being human.

At our parish here in Palm Desert the church holds 1600 people and you have to arrive about a half hour early to find a seat (and there are 10 Masses each weekend)...but you are correct. The vast majority of the crowd is older, though that reflects the demographics of this community.

As I see it, I believe in the goodness within each person, trust that they will find the path that works for them, eschew fundamentalist thinking. I also admit that there are outliers--those who do evil things. I guess if I'm wrong and there's nothing beyond this life, when I die, I won't know the difference. In the meantime, life is good and meaningful to me.

See what you set in motion, Glenn? That's what poetry is meant to do.

Churches serve some purpose for the community, but I do feel that you will not find god in a building you might find fellowship. God is found everywhere even in the reflection of your own eyes. That ending capped this off beautifully.

I was always taight that the church was the community not the buildng.. And it's bound to happen - the need for so many buildings is way larger than any need. Where you find God has so utterly changed over the years..

yeah - as if he needed our buildings... i think they're more for us than for him...

..yes it is the people..but sometimes the people feel the need to get together...support one another....intimate is better I think.great poem...thankyou.

A powerful commentary on how established religions have limited the faith of the people and damaged the God in us.

True, God is not found in a building and atrocities have been committed in the name of organized religion which is why I'm glad to know someone who can save us from ourselves!