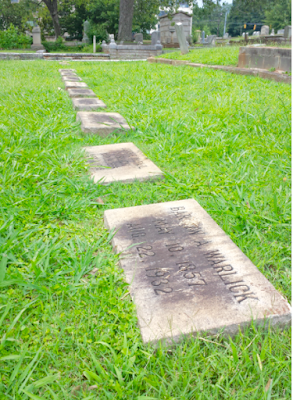 “Death ends a life, not a relationship.”--Mitch Albom.

There is just a flat stone,
flush with the grass, where her
urn is buried.                                Betty Lee Buttkus
(1927-1966)
dead at thirty-nine, a mother
no more, devoured by uterine
cancer before she could
experience middle age.
My drunken stepfather put her
close to him, in a cemetery very
near the airport, where
she could spend
eternity
listening to the roar
of
jets, and the
heavy
thud of traffic.

There were no trees
near, so the birdsongs she
adored were denied her.                              I remember spending my 22nd
birthday in boot camp, & how
much I hated mail call because
there were never any letters for
me from Mom; the cord was cut,
the maternal voice ever mute,
and the cheer leader left town.
I would stand leaning against
the wall, with my clenched
fists in my pockets, staring out
the second story window at
long lines of Navy barracks.

A year after her transition
on my first real liberty, I stopped
by in uniform--blue-black woolen
jumper, & those Buster Brown 13
button pants with no pockets, close-

cropped hair hidden beneath a white
canvas hat; eyes that were prepared
for duty in Viet Nam, softened for a
moment as I played back her 39 years,

A hand reached out & touched the stone;
a finger caressed the cold copper name,
all the delicious curves of it.

I do recall the profound silence, while it seemed as if there was nothing
moving on the earth, whereby the vast distance between heartbeats
elongated to the width of a solar system--& the high-pitched
screaming of jet engines, the sibilant scree from sea gulls overhead,
the raucous pounding & thudding & horn-honking from
nearby traffic--even the vigorous rushing of blood through veins--ALL
were stilled;

While I witnessed soft flesh
rub against rigid rock, with-
out making any noise.

This is a perfect elegy.. it has to be one of your best writing I have read... the description of that still moment, and you the little boy stepping out to touch the stone... so touching so real..

It is perfect because it came from your heart. She was taken from you way too soon, Glenn. Your portrayal of the ways that you missed her was so profound and tender too. The last stanza was particularly vivid with the silence...and finality.

I agree, it is perfect, as Gayle said, because it came from your heart. You have moved me beyond more words. Thank you, Glenn.

Thank you, Glenn, for letting us, see your mom, through your eyes, as the memories and tears flow, from your fingers, onto the screen.

Glenn, this is simply stunning. I am haunted by this:
"where
she could spend
eternity
listening to the roar
of
jets, and the
heavy
thud of traffic."

And so touched by obvious love for her.

all the words here are like teardrops and deeply moving.

You write so beautifully Glenn... that was fabulous.

Outstanding Glenn! Nothing more to say!

Profound sadness. The pain of remembering is palpable.
I am always mindful that I carry the mark of my mother upon my body -- that silly thing we call a navel is our lifelong connection to our mother, after she dies, until we die. That place of connection, of nurturing, of unconditional love that began within the womb. She is within you and upon you.

a heartfelt elegy indeed - the shape and eloquence of love.

I was moved by every word of this powerful elegy, Glenn. I lost my dad when I was 22 and it definitely changed my trajectory in life. This is a gift to all that read it. Thank you.

Oh Glenn, this moved me so much, got right inside my heart, the image her "her little Butch" crying by her grave, the devastation of her death at 39, your eyes "ready for Viet Nam" (but could one ever be ready for what Viet Nam tuned out to be?) A masterful write, and very moving. A gorgeous elegy.

Oh Glenn, this is so poignant. I had tears in my eyes when I got to the part about boot camp:
I remember spending my 22nd
birthday in boot camp, & how
much I hated mail call because
there were never any letters for
me from Mom; the cord was cut,
the maternal voice ever mute,
and the cheer leader left town.

Even though my mother is still alive, I feel like this every birthday now, since dementia has taken away nearly all of her faculties. I haven't had a card for some time.