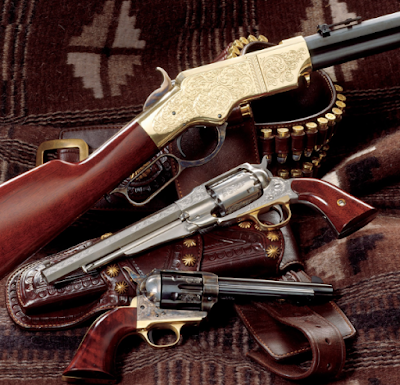 “Alright, the two month hiatus secondary to road trips, time
off & vacations is over, so before many of you lose interest
it is definitely time to return to my review of past episodes.”
--Glenn

Forty-One: Salutations--The sheriff to the stranger, “I thought
you had already slapped leather, big man.” Buck said, “Nope,
I didn’t want to miss the show.” Johnny seemed to recognize
Buck. Suddenly a golden eagle landed on the peak of a
nearby barn with a rattlesnake in its beak. Buck held out the
silver--Ey, muy hombre, I think these belong to you.”
Johnny said, “You make it too easy for this pinche gordo to
wriggle free.” Buck plunked the three silver dollars into
Johnny’s hand--I doubt he will crawl very far. We can cut off
his tail another day.” Graff to Buck, “And who in the bloody
hell are you?” The sheriff spoke up, “Calls himself Rod Buck.
Some fellas tried to kill him today, & the barber got wounded.
You wouldn’t know anything about that, would you, Graff?”
Johnny & Buck grinned. Graff, “Well, Christ no--why would
I know anything about that? There’s gunplay in this town all
the time, Hop.” He turned to the tall hunter. “Buck, you say?
I just want to get all the facts straight for my report to Mr.
Bronson.” The sheriff said, sarcastically, “So, Mr. Graff, do
you have all the facts straight?”  There was a peal of
laughter. Graff pushed his way through the crowd, suffering
the jeers, & made his way to his office, behind the corral. A
wrangler walked up to Johnny & handed him his wide belt
with the two big knives on it. Sheriff to the Eagle, “There
will be no more trouble, right?”  Johnny nodded yes. The
crows dispersed. Soon Buck & the Eagle stood alone in the
dusty street facing each other.

Forty-Two: Sauntering--Buck said, “Have a drink with me,
Fiero.”  The Eagle nodded. They unwrapped their horses’
reins. Johnny, “Do you belong in Negro-Espina?” Buck,
“I suppose. I was born here.” Johnny, “Then you are the
one”. Buck, “Who?” Johnny, “The one Bill Buck used to tell
us about--you know, the absent son, run off angry to hunt
buffalo.” Buck, “Then, you knew my father too?”  Johnny,
“I buried him.” As they walked they talked about their
horses, El Blanco & Jesus, & Buck’s huge black dog,
Cheewa, “black puma”. Buck turned toward THE CHINA
DOLL, but Johnny stopped him, “I take money from
Bronson, but I try not to give it back to him. I only drink
whiskey at Pedro’s--do you know it?” They wrap reined in
front of the Cantina. The Eagle looked around,” They
watch us.”  Buck, “Fuck ‘em”. Johnny, “Good, yes, Red
Face will run to Bronson, but it is of no matter. Come,
meet Mateo.”

Forty-Three: Toque--They entered the cantina, a small
space with a half bar, no railing, no stools. The bartender
was short & husky, with a rope burn scar on his neck. His
long dark hair was tied back, & his smile was decorated
with bad teeth. Johnny, “Mateo, today is whiskey. I have
money from Graff.” Mateo, “Graff, se, one gordo bendejo.”
Johnny, “Yes, one very sad pinche hijo de puta.” The ten
tables were peopled by charros & mestizo peasant farmers.
A young vaquero played a guitar, & sang softly to a saloon
girl. A bead curtain parted loudly & a pretty buxom saloon
señorita made a beeline to Johnny, just as Mateo delivered
a bottle of whiskey & three glasses. “That’ll be four-bits for
the burn.” Johnny introduced Buck. Mateo, “Ay, carumba.
So he has come home at last. Good, good--just in time.”
Johnny, “And what do you need, Lisetta, my pretty bird?”
Lisa smiled, “First your cock, then your pesos.” Johnny,
“You really tempt me, your sweetness swells my heart--
but please fly away--I must speak with this silent buffalo
across the table.”

Forty-Four: Patriarch--As the saloon cutie left, Buck asked,
“Tell me, old caballo, what’s the story here?”  Johnny
replied calmly, “Nothing. I am your man. There can be no
one else.” Buck, “Two weeks ago I decided to return here,
yet somehow, it seems many folks were expecting me, How
does that cinch up?”  The Eagle, “Because your father loved
you.”
saloon staring at his father’s back, who was drinking at the
bar. The bartender let Bill know his son was behind him. The
old man whirled around & snarled, “What? What!!” The boy
began to weep silently. His father said, “Get out of here!
What the fuck is wrong with you? What do you want from
me?” The boy just stood there. “God damn it, Roddy, get the
fuck out of here. Go back to the ranch. Maybe the squaw will
share her tit with you “.
father was a mean drunken asshole.” After a moment,
Johnny said, “Your father is dead, but you are very much alive
--and now you are the Buck. That’s all there is--simple.” Buck,
“Sorry, I still don’t savvy.” Johnny, “You wrote a few letters to
him, right. He read them to some of us.” Buck, “He was a
damn fool.”  The Eagle, “He became a drunk, yes, & he died
hard, alone, but he was not a fool.” Buck was silent, then said,
“I’m just bone-busted tired. Everything I once knew is dead,
turned to blow-sand ghosts & scorpions in my boots.” Johnny,
“Your father had a dream.” Buck,”When I saw him last, he was
fresh out of dreams.”

Forty-Five: Pact--Johnny, “Deep sadness, yes, but beneath
that bitter bark there is still a son who will breathe life back
into the ruins of the ranch, who will put magnificent horses
back into the high meadows at Antlered Buck.”  Buck,
“You’re telling my my father dreamed of horses?”  Johnny,
“Yes, he dreamed it so hard, he died with hoof prints on
his face.” Buck’s eyes became moist. Johnny, “But do not
think too much of the past. You are alive, & all alone now,
--just like me.” Buck, “Will you work for me?”  The thick
knife from the Eagle’s left hip suddenly bit deep into the
table next to Buck’s hand. In the same instant, Buck came
out of his chair with his Colt cocked in his right hand. The
Indian held the hunter’s gaze as he moved up to him,
pushing the Thunderer out of the way before thrusting out
his calloused brown hand. They shook hands firmly. Johnny,
“I will proudly stand with you, fight others with you, watch
your back & be your companero.”  The Colt was re-holstered.
The Bowie knife was re-sheathed. Then they noticed all the
charros in the cantina re-holstering their weapons. Mateo,
“Hey, you hombres play rough.” The place erupted in
applause & laughter; the music resumed. Johnny, “You are
rattlesnake quick for a big man.”  Buck, “As you are for an
old one.”  They sat down. Buck, “It won’t be a Sunday picnic
working for me, Bronson has a fucking army.”  Johnny
smiled, “You know, sometimes I think I can hear my death
song on the winds of dawn--but just the melody, no words.”
Buck, “Yeah, me too, Pard.”

Posted over at dVerse Poets Pub OLN
Posted by Glenn Buttkus at 12:25 PM

Oh I do love the recap... somehow I feel I might have been away during some of these episodes... so much to learn about his father (both for Buck and us)... even so I'm starting to look forward to new episodes...

I've been wondering when you'd get back to this!
So -- I want to know why the bartender has a rope burn on his neck? Escaped a hanging? What?
Love these recaps - I am right there in the scene!

I so enjoyed the recap and made me recall the excitement of each chapter. Love the "western" flavor very much Glenn, from a city girl, smiles.

For some reason this isn't taking my comments. This is my third time tring. I love this recap but am looking forward to the new episodes!

Ah, I was wondering when we would get to read the next review :D so very exciting!