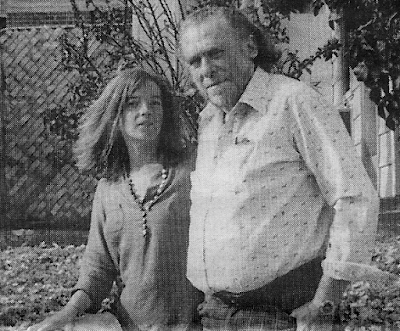 “I loved you like a man loves a woman he never
touches, only writes to, keeps little photographs
of.”--Charles Bukowski.

Yeah,         I was the one the lasted the longest,
almost twenty years.
He gave up the sluts, skanks, & barflies
after he hooked up with me.
Hell, I buried him.
It was ironic that I used to run a health food
restaurant, where we had our first date, because
it turned out I could outdrink him, out swear him, &
outrun him when his temper flared, all the time loving
him like a crazy woman. Life with Hank was steamy,
profane, & existential bliss, all wine, cats, poetry, and
the track--damn he loved the horses.
He always liked to sit in the same seat
at Santa Anita--they would reserve it for
him; had a sign draped on it, RESERVED
FOR BUKOWSKI.

We met in 1976. I attended one of his
poetry readings at The Troubadour in
Hollywood--a rowdy affair--he and the
audience would interact, yelling
obscenities at each other. Turns out
he hated giving readings, didn’t like
“performing”--but he needed the money.
Afterward, at the book signing, he gave
me a scrap of paper with his phone number
on it. I gave him mine impulsively.
He called me two days later. “Is Linda Lee
there?”--always liked to call me Linda Lee.
We decided to meet at my restaurant,
but I guess he was nervous because
I saw him drive by twice in his blue VW;
claimed he got lost, but really he stopped
at a nearby bar--had to get drunk
first.

It is hard to describe the man
in mere words. He lived by words,
but he was a force of nature, he
dwarfed language. I adored him,
but at times wanted to strangle him, he used to say,
“What matters most is how well you walk through
the fire.”--and yeah, a woman had to be
a firewalker to survive within his molten aura.
I guess he was a tough character. He could get belligerent
& mean, but so could I. He was moody, sure, but he had a
calm center as solid as a mountain. He hated all religions,
but he was one of the most spiritual persons I ever knew.

When he wrote, he went upstairs to his little room, took a
couple jugs of wine, would sit down at his old typewriter, &
play classical music--he loved Shostakovich & Sibelius. He
didn’t really dig rock music--but Sean Penn became his pal,
& he got introduced to Bono. We went to a U2 concert at
Dodger Stadium. Harry Dean Stanton was with us. They
all loved Hank. Bono dedicated the concert to “Charles
& Linda Lee Bukowski”. I screamed with joy, & peed my
pants with surprise.

He used to give readings at punk rocker hangouts like
The Cuckoo’s Nest and The Golden Bear. The punkers
really were attracted to his “Outlaw Writer” persona. He
hated the Beat Poets, felt they were fakers & fags.

He always said that we were a good match because we
had the Moxy--the ability to endure what life tossed at us
--to fully discover & savor what truth is, what love is--
through the mirror of your mate.

A great story... and it sound like she had a somewhat calming influence... love how you played with contradictions and opposites... I like the thought on how you paint the character here...

It feels to me like you knew them, there is so much detail in this piece. As Bjorn said, it sounds like she had the measure of Bukowski, a calming influence. You brought her to life so vividly, Glenn.

I agree with kim, this is absolutely extraordinary work here, Glenn ❤️

I really enjoyed the details of their love story Glenn. I love how strong she is also to bear this force of nature. This is my favorite line:

a firewalker to survive within his molten aura.

I knew you liked Bukowski but had no idea how much until this. I too love her strength and purpose, how strong she was. I felt as if I were listening to her talk of her love for him, as if you knew them intimately. This is exceptional Glenn.

Ah Glenn....you write with such gusto and such great detail! Love every bit of the telling of this piece...especially two lines:
"and yeah, a woman had to be
a firewalker to survive within his molten aura."

...and the idea of the mate as a mirror. I must admit...not familiar with these folks but shall be doing a bit of research and reading now. :)