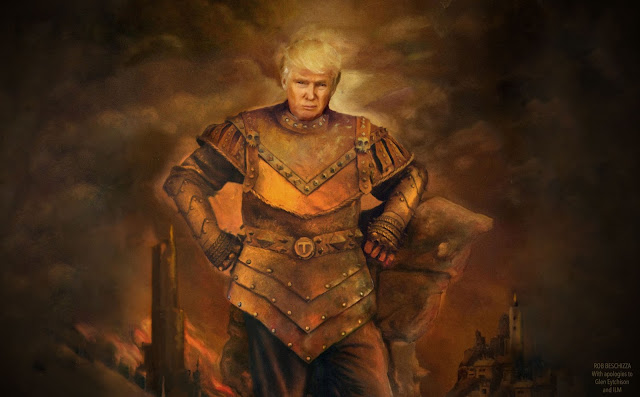 “No major-party nomination in the complete history of
this nation has ever known less or has been less
prepared to deal with our national security.” --Joe Biden

For all of us presently experiencing
the Trumpian phase,
who will be forced to endure the upcoming
Trumpian days, tomorrow promises to be
a day drenched in sorrowful infamy--

as Trump is actually inaugurated as President,
as Trump demands the media kiss his ring,
as Trump defames American heroes & ideals.
as Trump belittles & bullies the disabled,
as Trump surrounds himself with battalions of
billionaires & squads of generals & bevies of
bubble-headed blondes,
as Trump tweets vitriol, racism, sexism & lies,
as Trump insults, berates, & demeans women,
as Trump attacks & distorts civil rights,
as Trump dreams of introducing fascism to the
lost sanctity of the Supreme Court,
as Trump sodomizes our health care system,
as Trump redefines Truth with world-class con
and spin and inexorable boorish braggadocio,
as Trump side-steps revealing his tax record,
as Trump accepts praise from Putin,
as Trump simply does, says, and is
whatever he feels like at the moment,

unfortunately, after the coronation tomorrow,
he will know what it feels like
to actually be the most powerful
man in the world--
able to silence his critics,
able to gut Social Security,
able to make millions of us squirm
as he orders golden toilets
for the White House, but

I have no more tears to shed.
I have herds of fears to leash,
I have buckets of regrets to calm,
I have dreams to vanquish, and
I have future nightmares to experience,
for at 7am EST tomorrow,
the virtual rape of Lady Liberty
will be televised live
in front of an audience of billions.

Probably, most of
us will survive the next four

Posted over at dVerse Poets Pub MTB
Posted by Glenn Buttkus at 1:32 PM

Repetition in a political rant is really effective and I think this is a tool you use with ease. For myself, I choose to be hope-full. I think the extremes you see from Trump are how he positions himself to negotiate and he is a negotiator. We have got to come together. We've got to! (Note, repetition).

As if joe bite-me is an authority on knowing anything except how to be foul mouthed. But I agree with Victoria...i am hopeful. I love how you beat us over the head with Trumptrumptrump. Good use of a rant. I think weneed more hope rather than so much negativity. We need more beat poets to stand up and demand that we make love, not make Trump. Trump won. Move on and work with us to defeat defeatism. It's a funny poem and gave me a huge laugh and a grin. Beat us over the head Glenn, but don't beat us down. Be the beat poet you truly are and set us all straight, but don't take away our faith in the American people.

At first I wasn't going to read this because I have read enough about the man and he hasn't even been sworn it yet. But I did find this poem powerful and hopeful at the same time. Well written.

Hail to the grief. Sanity still may be out there somewhere, perhaps hiding for now

Colorful repeating and hyperbole. I wish you peace

I remember analysing political speeches when I was studying linguistics and repetition was right up at the top of political rhetorical devices. In every speech I have heard him make, Trump repeats himself with little or no effect - he has no idea of rhetoric. Your repetition of name was so effective, Glenn! Tat name not only makes me shudder with fear but also with revulsion. The title was clever - he really does like to blow his own trumpet! With his hairstye, his grimaces and the way he 'tweets vitriol, racism, sexism & lies' anyone with any kind of vision can see that he is has fascist leanings. You've expressed the feelings of people all over the world with the final repetitions:
'I have no more tears to shed.
I have herds of fears to leash,
I have buckets of regrets to calm,
I have dreams to vanquish, and
I have future nightmares to experience'.
God help us!

I have no more tears to shed. I have herds of fears to leash, I have buckets of regrets to calm, I have dreams to vanquish.. sigh.. you voice both fears and hopes! Excellent write.

A fine rant Sir. I fear for the world today. I really do.Time to roll up our sleeves.

Definitely trumps the Trump in rhetoric power... I think we have no choice but to survive. But the world will be different tomorrow. Hopefully we will be allowed to write at least.

Oh! I stand with Victoria and Toni. I have hope....have to....how can we survive everyday if we don't? Write poetry...more poetry....poetisfy the world! We have fear, but we have been living in fear for a long while....since the Cold War, before and beyond. Time to pull up our Big Girl/Boy pants and do something positive for life and our country. Plant fruit trees, bushes, a garden....feed stray cats and dogs...adopt them....do something positive and don't hide behind the common fear. What comes will come but don't live in fear. YOur poem makes great usage of repetition....and I tend to agree with someone here (you?) that Trumps speeches are rattles of emptiness...but we have to make our Peace. And we will (speaking to you, Brother Bjorn) be allowed to write on. Jane

i'm telling you....yesterday was emotionally sad for me. it was also sad for my country.
we are a joke now. a celebrity runs out country. i don't even know what to think.
your poem really depicts the reality though. great write.

VERY late to the reading....but surely not disappointed at all with your use of repetition here. VERY glad my daughter and I were with 100,000+ on Boston's Commons on the 21st....joined by millions of women (and men and children) across the GLOBE...to celebrate hope and resolve and denounce bigotry and hate and narcissism and misogyny and etc etc etc.
Two favorite posters I saw (among so many many amazing ones):

WOMEN HAVE 2020 VISION
and
EVEN IKEA HAS BETTER CABINETS

I especially liked in your post here, "battalions of billionaires and bubble head blondes"....fearful to write I "liked this" as it is horrific in its content, right? Surreal. Isn't there a song that includes the lyrics "I will survive." Yet I fear there are many many who will suffer greatly in the next four years and sadly, many many of those are the very ones who bought his grade school level rhetoric that promised they could have the Brooklyn Bridge for a reasonable price.
Excellent words here.
We must somehow hang on.
I'm waiting for you to write something that deals with "alternate realities" and/or alternate facts. Your pen could do it justice, that's for sure! :)
Happy Monday, my friend. I am so glad I found you in this little space of cyberspace! :)