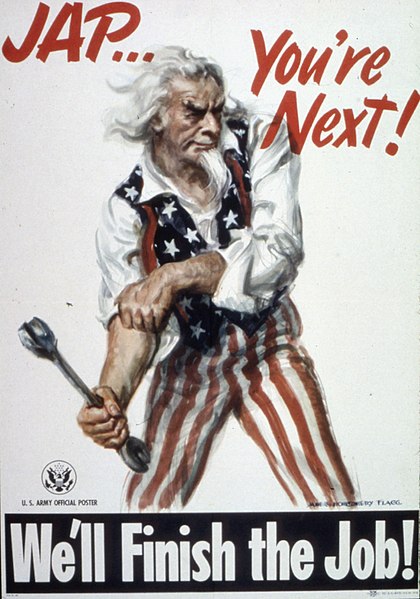 “The genius of Einstein led to Hiroshima.”
--Pablo Picasso.

During the last months of WWII, taking Okinawa
was a costly endeavor. Warren Stolhand, my
father-in-law, fought there. He was a medic in
the Marines. When it was over, his outfit had
suffered 90% casualties. Over 21,000 Japanese
soldiers refused to surrender--many of them
committed suicide rather than facing defeat. He
was home in Texas on leave, when he got new
orders--shipping him off for invasion of the home
islands of Japan. He was on a troop ship when
they got word that an atomic bomb had been
dropped on Hiroshima.

On a steamy bright morning, August 6, 1945,
Paul Tibbets, Jr. flew his Boeing Superfortress,
the Enola Gay, from an island in the Marinas,
and dropped the first nuclear weapon, Little Boy,
a uranium gun-type bomb, on the city of
Hiroshima. Three days later we dropped Fat Man.
a plutonium implosion bomb on Nagasaki.

It was estimated that if we would have carried out
Operation Downfall, the invasion of Japan, the
Allies would have lost over a million men. The
Japanese warlords had prepared the entire
population of Japan to fight to the death. To this
day, there is still a debate over the rights and
wrongs of our actions.

Birds of prey have no
choice; they are nature’s killers--
warriors are the same.

Posted over at dVerse Poets Pub
Posted by Glenn Buttkus at 12:45 PM

There are no easy answers to all of this, Glenn. And we don't seem to be able to hold on to the lessons of the past, either.

Those Japanese soldiers would rather die in honor as warriors, than surrender. Thank you for your personal insight on this Glenn. It was difficult war, difficult decision and until now, we are still conflicted if this was the way to end the war.

I love how you could tie this to your personal story... I think it will always be debated what would have happened if the bombs had not been dropped... maybe whatever we do, we have to learn from the story...

I'm learning so much this evening, many gaps are being filled, and I think we all agree that war and violence are not the answer. I like the personal link, Glenn, which makes the telling personal and real.

We all did evil in those days. No denying it. but we did the ultimate evil. At that point, Japan was down to teenage boys and old men going to war. they were not even allowed the dignity of committing seppuku. Instead they did "hari kari" which means belly slitting. hari kari is never written, only seppuku. It is in my English that I write it. In a high school in Tokyo, there is an old high school where the young boys and old men would go to write their jisei (death poems) before going away in the planes. the Japanese have memorialized the high school leaving intact the poems. Japan was basically starving to death. If we had waited a few more months, most of the Japanese army would have committed seppuku and the population would have basically starved. The Japanese were cruel emprisoners, but we as bombers were only quick murderers. Roosevelt washed his hands in the way Pilate did. American cheered and clapped each other on their backs at the "great" taske we had done. My mother hated the Japanese. Why? she never could give me any answer except it was patriotic to do so. We imprisoned thousands of Japanese American citizens just because they were Japanese. My mother actually dated a young Japanese American sailor until he was killed. She lived in San Francisco at the time. We stripped these American citizens of their homes, property, names, money, family. then we bombed Hiroshima and Nagasaki. We did an evil thing. No need to pretty it up by being patriotic. We do the same thing to Muslims and Mexicans today.

It was a horrific atrocity any way you look at it.

I love how you include the personal touch, with the story of your Father-in-law. Your prose elaborates on the complexity of the situation facing the allies, and your haiku wraps it all up with clear truth.

My US History team-teacher and I would have our students discuss the decision to use atomic bombs or not. We would provide them with primary and secondary sources, including the casualty estimate that the military projected, as well as the deterioration of the Japanese main islands. More often than not, students came out against using the bomb. The impossible decision Trumen faced was the fruit yielded by the root of total war. Even a war as justified in its beginnings as WWII can too often become an "ends justify the means" violence that escalates into more violence.

Your haibun helps to illustrate this in its way. A powerful write, Glenn. Thank you!

Great combination of personal and world history. People will debate. For the people in combat and their families, the debate does not change how much you want your own to survive.

Yes indeed. Warriors are all the same. Who is wrong. Who is right. How will one know. Well done!

It has been interesting to read the responses to this prompt. Some heart-rending, some poignant, some filled with facts, others with memories of childhood and relatives involved. The poster slapped me in the face. Somehow Rosie the Riveter is more pleasant and one I'd rather remember....this with the word Jap reminds me horribly of the Japanese internment camps for US citizens of Japanese heritage....and then catapults me to the "in your face" and divisive rhetoric of Trump.
I've also, having been a communications major, been enthralled how we use words that seem so civilized and polite to refer to something more frank and "undiscussable" -- passed on rather than died; restroom rather than toilet; casualties rather than the dead. You always make me think, Glenn, with your powerful writes. I most especially like the haiku here. It makes the point effectively.

The debates go on, and it is more than difficult to choose one of the two options. Or perhaps there were more options that we do not know of. The only thing to take away is perhaps that wars and bombing each other are never a solution to anything.
I enjoyed your take and the personal connection too.
-HA

Thanks for sharing this story with us. Makes it all more immediate.