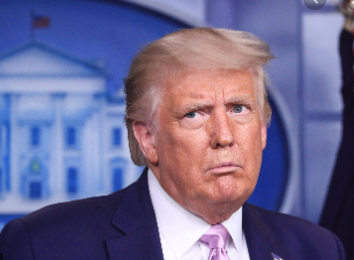 “I rant, therefore I am.”--Dennis Miller

When lions lie down

with llamas, they struggle

on the political butt,

and the pop, the thud

for it deserved the gobsmack

I am the giddy liberal swami,

making damn sure I voted early,

feeling all cool, confident and burly,

it’s too late just to suck a lime,

it’s wham-whizz past the time

for his complete departure.

I tell you, history will smack down,

be it dirt poor rural or wealthy town,

every vestige of the Trump years

all the snake oil, hate and fears.

En masse, we will awaken from the nightmare,

electing a President who will care,

as we, the people, reject the super rich

and every greedy lobbyist son-of-a-bitch.

up the redneck electorate.

Now’s the time to initiate the protectorate

for decency, dimples, donuts and democracy.

are Trumps tokens and trademark.

Never in the White House has there been

Trump is merely a lump of cancer,

a lackey with a license to lick the larcenous limbs

He has made America a sad joke

and sent the Republic up in smoke.

Posted by Glenn Buttkus at 1:44 PM

I wonder how this really has happened... I hope that decency will have a chance to be rebuilt again. Civility has been missed for a long time. Let us hope for a tsunami indeed.

A great tirade Glenn - I could hear your voice ringing out - full of fury and great rhetoric - reminded me (in a different context) of Gil Scott Heron - 'whiteys on the moon' or even 'the revolution will not be televised'. Powerful stuff and just what poetry's good for.

This is absolutely kick-ass powerful, Glenn!💝 I can truly hear your voice here as the poem progresses. Especially like; "Trump is merely a lump of cancer, a lackey with a license to lick the larcenous limbs of dictators, strongmen, demagogues." Yes he is! He's an absolute menace. I am sincerely praying for the election to have a positive outcome. The world needs it. We poets need it!💝

Your tirade has the flavor of a good-old fashioned tent revival meeting. My favorite bit:
"Approaching that beautiful blue tsunami
I am the giddy liberal swami,"

My absentee ballot has been turned in for a few weeks now. Glad that part is done. I saw two of bozo's lackeys from NSA break into my mom's cable tv programming at about 6 last night saying that "Iran and Russia" are trying to twist the vote so don't believe anything you see or hear. Sounds like laying groundwork by bozo to pull some kind of stunt after the election is over. God Help Us.

you've had a real romp with this rant at tRump! I can feel the sound, the pace .. it's awesomely powerful ... we are all praying for that tsunami!

Rant on my brother, rant on! Strrrroooooonnng poece Glenn — loved it!


Your tirade rings out loud and clear, Glenn! I smiled at the lines:
‘When lions lie down
with llamas, they struggle
with different languages,
leaving gaps and long pauses
between licentious litanies’.
I have such trouble following Trump’s so-called speeches, they just don’t make sense, and I’m distracted by the ridiculous arrogant faces he pulls.
I enjoyed the sounds in:
‘I fist-slapped it
on the political butt,
and the pop, the thud
was bang on,
for it deserved the gobsmack
the serious intentional splat.’
You also captured the spirit of Poe in:
‘Approaching that beautiful blue tsunami
I am the giddy liberal swami,
making damn sure I voted early,
feeling all cool, confident and burly’.

That relentless use of alliteration is like driving nails into a coffin lid.

Wham, bam, thank you Glenn! You said it all here, and said it so well...

A rant Allen Ginsberg would be proud of! Incredible alliteration, and poisonous punches so well deserved.