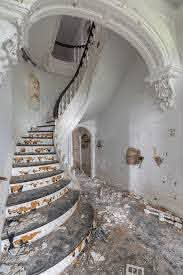 “Progress is not achieved by preachers or moralists,

Deep in a forested box canyon, I came upon an

peeling, its siding black from rot and moisture, its

I carefully crossed the weakened porch, and

kicked open a tall front door that had a gargoyle

knocker. The wide leaf-strewn foyer led to a grand

staircase that circled up to the second floor. I found

five bedrooms with their doors nailed shut. There

was a shorter set of stairs climbing up to the third

feet of hardwood dance floor. A large section of the

roof was gone, caved in. There was a small section of

retaining wall in front of an architectural abyss. I found

out there is nothing behind that wall, except a space

where the wind whistles.

I think if you listen carefully, it's not just wind, but music and ghosts dancing in that long abandoned ballroom.

They are so tempting, those abandoned houses, especially ones with ballrooms. Yes, Merril has the right idea – ghosts in the ballroom.

My mind started to drift... especially those rooms with their doors nailed shut. I would probably be too scared to explore any further.

I was stopped short at the rooms with the doors nailed shut. There must be a story there! Great write, Glenn.

This left me wondering what happened in that house! Well done Glenn.

Very eerie, yet with serenity of being alone. The line for this prompt works so well as an ending to this beautiful prose piece, either interpreting it in the silence of horror, or the silence of the wind in serenity. As always, Glenn, it is an honor to read and analyze your work. You are an inspiration.

If only the walls could talk!

This is deliciously eerie, Glenn!💝 The prose in its entirety gives me goosebumps as I visualize what's behind those doors nailed shut, and whether the person exploring the house along with us has the stomach, the courage to explore further. 💝

Glenn, I can't help but look at your story as a metaphor, the house as person. Sometimes finding nothing is better than an alternative. The top floor hollowed by an abyss isn't great as the deterioration. The locked doors may best stay locked. Maybe not. EXCELLENT writing, as always.

P.S. I love your opening quote by Fry (and add musicians to it.) The salt of the earth that gives it its savor.

The bedroom doors were locked. Spooky. But that must have been a beauty once.

The image of the architectural abyss is perfect.

Goosebumps broke on my neck when I read about that empty ballroom it also reminded me of the shining.

Eerie indeed and so well done. The nailed shut bedrooms is a particularly Poe touch. I also thought of Ozymandius - "Look on my Works, ye Mighty, and despair!" - failed grandeur an image for our times.

What scenes and stories must have played out in this house in its heyday. This has the potential to become a much longer story.

I relate to the SF quote. Think I fit in the madmen/rebel/dreamer/poet group....

I kept thinking that ghost dancers from that ballroom could be behind the wall. Good one, Glenn!