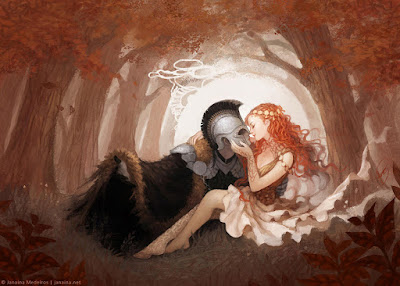 “Beauty provokes harassment, the law says, but it

looks through men’s eyes while deciding.”

is the latest of powerful men

of young women within his sphere.

Eleven of them have come forward

to hold his feet to the fire.

But that would not have

who has lava slippers

and a flaming robe.

His once pale skin

from when he lounged

in the court of Zeus,

Even before his banishment,

he had his eye on his comely niece,

Persephone, who had blossomed

his lust consumed him,

and he emerged from the underworld.

Hades: Damn, you have become the most

beautiful woman I have ever seen.

Persephone: Why thank you, Unk--you

Hades: I must have you.

family, and Daddy may have something to say

my the arm; Zeus can visit Hell if he wants to

talk to me. He’s the King of Nothing down there.

She screamed as he tore her dress and dragged

her into his cave. Zeus, after a time did intervene,

but in typical Male fashion he partially blamed

his daughter for her predicament. His decree was

unfair. He decided that she would spend six months

in the underworld, and six months on earth--thus

creating the seasons. Persephone was just

another young woman complaining about her

treatment by men, not listened to, and not

Posted by Glenn Buttkus at 5:38 PM

Isn't it sick and sad how the myth still caries relevancy into modern times this way? Many people in power are corrupted and perverted, using their puissance to take advantage of those who would be hard to believe if they spoke out against them.

The common thread in each poem today shows how much men had control over women, and the myth shows it as well. You depict this matter disturbingly, brilliantly, and remarkably. Always enjoy your work, Glenn. I love the feelings it conjures up.

Glenn, **THANK YOU** for speaking out as a man against these practices. It should be commonplace for decent men to speak out against the exploitation, coercion, and blaming of the victims of the lechers and those males who use them as devices of control over females. What always astonishes me is that every single man has a mother and probably several other female relatives they care about, yet they remain mute when they see these vile practices carried out.

First hearing of Cuomo and his vileness. :::GAG:::

Ah, yes - thank you for highlighting this. It does read as a tale of abuse to me. I wonder if it was meant to be read that way even then. I don't doubt that such abuses were commonplace.

I really enjoyed the dialogue section in particular, Glenn... that was inspired!

I have to admit the story leaves me quite aggravated with Persephone for not kicking Uncle Lecher in the danglies and flouncing off in the garden!!!

From one man to another who gets it and to women everywhere, we value and support our mothers, partners, sisters and daughters' independence such that they should always be empowered to make and action their own informed choices.

Unfortunately it's the same in the East as well, no sooner does a woman get assaulted by a man, fifty people stand up to judge her claiming she provoked the other with her good looks or choice of attire. It's so ridiculous. Are they implying that clothes be labelled too? A most epic, strong and poignant poem, Glenn! Kudos to you 💝💝

So powerful in its timeliness!
"But that would not have
bothered Hades much,
who has lava slippers
and a flaming robe.'
Wonderful description in these words. "Ginger lassie" -- yes. (Wierd, I know, but this sounds like it should be the name of an alcoholic drink! I'll have a Ginger Lassie, please!) SADLY in this myth... there was no asking..only the taking.