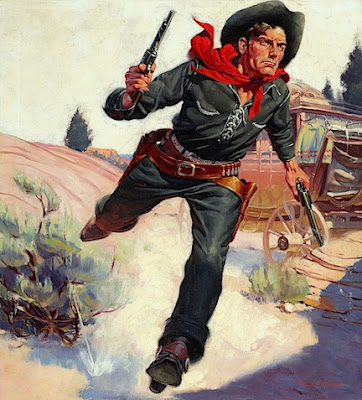 2(one-shot that expands with the action, all in

Buck dropped the fifteen feet with his black hat on

his back, his big arms wide open, with a gun in each

men off to his right moving toward him, their

his shoulder, the next slug his left knee, and

another bored fiercely into his right thigh.

Now he could see himself, landing lightly in a pool

of quiet dust, firing his pistol and his sawed-off as he

barely touched the ground, dropping his guns and

immediately leaping back into the thick air, lunging

across a shaft of golden light as he heard hooves,

thunder, and there was Johnny Eagle on old white

Bob, and himself atop his Appaloosa, bursting

through the piercing dust of a hump-horn ocean, a

panicked, punctuated suddenly by a chorus of

and Colts, all one fiery barrel, first putting down the

Then there he was afoot, running on with death

hot in his nostrils, his legs cramping, racing toward

the dark mountains; becoming a trio, his father

running on his left and Johnny Eagle on his right.

For a time they moved along together, each matching

the other’s stride, running as one six-legged creature,

as the rifles barked on. Buck heard his father stumble

and fall, but he did not slow or turn to the old man, he

just ran on, the Hunter and the Eagle, fleet as deer,

pumping their arms, tearing up clods as they sprinted,

their faces purple, foaming at the edges of their splayed

lips--and then the Indian went down, landing lightly like

a loose feather, a soft death as Buck’s eyes were

blazing with tears, as he ran on reaching for the

purple mountains with his big hands.

He pushed himself on until there was only the

running, and the running had no heart, no emotions,

no spirit, until he was overcome with a great fatigue,

and as he slowed the guns went silent, and the

hooves of thunder swelled up behind him, the sky

became a black funnel, an ebon tunnel. The

thunderous darkness tore at his limbs, and ripped at

his eyes, and his lungs turned to stone, until he was

full stop, and he finally turned to face the horns.

3(tight one shot) Buck’s broad back as he turned

Posted by Glenn Buttkus at 3:32 PM

Oh my! Is this the end? (It sounds like it could be?)
It was good to see and hear you on Open Link Live!

"He pushed himself on until there was only the running, and the running had no heart, no emotions, no spirit, until he was overcome with a great fatigue, and as he slowed the guns went silent,".. oh my goodness is this it then for Buck? What happens now? On the edge of my seat, waiting! It was wonderful to have you with us at Oln LIVE tonight! 💝💝

Quite a climax, filled with an entire lifetime, one worthy of repeating. As it should be.

The Grand Finale? It seems like the perfect ending, though I can't believe the saga can be over so soon!

And presented so eloquently.

I was hoping to find the wonderful poem you read at Open Link live as I snuck in whilst you were reading it and missed the beginning. It was very powerful and hard-hitting and the kind of poem that needs to be read. I hope you may consider posting it (I would certainly reshare it) or I hope to hear you read it again <3

Sunra: I read 2 poems out loud. GOOD PEOPLE, and INTO THE WEB. Both are in my archives, and you may have access to them. Thank you for your support.

Hello... is this really the end... I assume that he is now leaving for an eternal hunting ground. I had only hoped that he would find the white buffalo somewhere.

I feel sad for Salina...

Glenn, I'm so sorry I was on a blogging break for November and missed this until now. My heart is literally aching after reading Buck racing with his father on one side and Johnny on the other and as they fall one by one. I'm sad to hear how Buck was carried up and away in a black funnel. I'm going to miss him :( I feel like the characters in your story have links to people you've met along the way. Bravo to you for being able to write them into your cinemagenic masterpiece.