The Dancer In My Belly 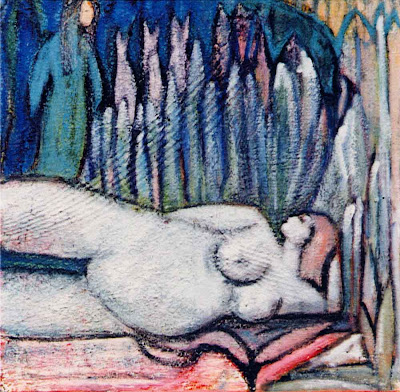 You can’t see the dancer in my belly, can you, mister?
I didn’t think so. And I don’t have the icon to describe,
much less, to explain her.
You say, perhaps the moon has brought her?
(She’s in the fire, in the trees, in the shadows.)
You say she’s not real.
I say, no, but she has tiny feet, and hands,
and they are sharp and hurt like hell.

I move to the edge of the woods,
find a house, close a chapter, start another.
I live beside a river, outside a small town.
All day all night I hear the sounds of the ocean,
the squirrels and geese, frogs and cats, chickens,
lizards, dogs, hawks, herons, ibises, bats.
I have plenty of company.

Jill works at the video store.
She wears her hair in dreadlocks.
Five movies, five days, five dollars, she says.
I say I’d like to order something special.
Okay, so tell me, says Jill.

I say, she should be about so tall, single, available,
a little bit homely, a little bit beautiful.
Not too young, not too old, talented,
creative, strange, brave, and capable.
Jill says, strange? How strange? Strange as me?
Or is different okay?

I say sure, different, that might be okay…
just not deeply troubled.
She looks at me. Where do you think strange comes from?

She tells me: My boyfriend overdosed on heroin
and died, the night before we were to leave the city..
Last year someone killed my sister.
Here, in this backwater fucking county
and no one is looking for the killer.

New York spit me from an empty and I skidded to a stop
in a place where every second person is named Varnum,
Varnam, Bellamy, or Holden,
and all of them think I have bugs in my hair.
She hands me my tape. We share the same birthday.
We were made for each other.

We are still a long way from hurricane season.
This year, I want to be prepared.
A woman enters the store.
She’s beautiful, but hardly strange.
Jill unwraps a piece of candy.
I’ll see if I can think of someone, she says.

You are in the fire again when get home.
Get out of the fire, I say.
It’s my fire, and I don’t want you there.
You say, leave me alone.

I settle in. The cats come home
I set up to write; it’s time to make up stories.
The moon is a yo-yo rising over the marshes.
I don’t have to look, I know it goes up and down,
I know it’s played by a left-handed woman who waits.
She plays with the river, the tides, the ocean.
This close to the ocean, the river has perceptible tides.
They go up and down, up and down.

What shall I do about you? I ask.
(She’s in my fire, she has no manners.
When I try to speak to her she vanishes.)
I say it to the air, where devils dance.
Sometimes I mock them with the damper
just to hear them roar.

Now she’s dancing closer to the door.
You are pathetic, I say.
She hears that I’m addressing her and vanishes.

Heart is courage, I say to the empty door. Heart is fire.
Heart is why we love, heart is why we go to war.
I study the empty place where my heart lived.
I say, you can leave any time you want.

The flame is empty of your image now.
My prayers are quieter.

We know, by theory and by observation
that people are the better off for talking.
Here, take this icon. Your silence kills me.