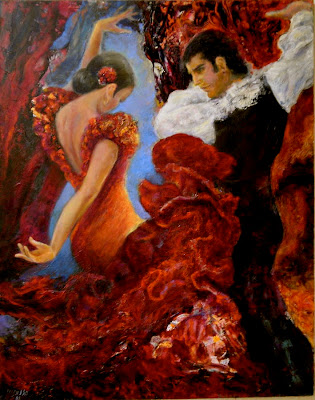 The young gypsy boy leaned against
the crumbling adobe wall, watching the police
march his family out of the abandoned apartment
they had been residing in, two husky villagers
in blue coveralls bricking up the door and windows;

until the gitanos appeared like pigeons in the square
and when the ring of Romani formed thick,
the boy knew it was time for the juerga,
the spontaneous spirited blues chanting
of the dispossessed;

in a strong clear soprano voice he began the cante
as a guitarist appeared from a darkened doorway
starting the togue, his strings vibrating with tears,
the words bloody and beautiful, joined

immediately by a father and son pummeling
their wooden box drums, as the cajon cadences
brought on the chorus of palmas, that pounding
twelve-beat cycle, dozens of hands clapping,

as Maria leaped into the center of the circle,
with her red-yellow-orange skirt whirling,
shaking finger bells, her golden shawl tied
around her shapely backside, throbbing
and ringing the tiny bells on her belt,
her flashing feet thundering on the cobblestones,

beginning the baile, continued by one woman
after another, young and old, singing the verses
they all knew about the purges, about Hitler,
Stalin, and Franco;

the three policemen got out of their patrol car,
the brick layers put down their busy trowels
as they joined in with the rising Andalusian beat,

and for a moment there were no oppressors,
no victims, just the dancing, chanting, and
the flama guitar rhythms spilling out
of the sad courtyard, rising, rising
toward the indifferent twilight beyond.

Posted by Glenn Buttkus at 1:38 PM

I like your hot Romani take on the prompt!

and music conquers all...a very intriguing scene..i like that the police even joined...and in that i find a community that even in turmoil or a rough situation that can come together...that is pretty cool to me...

sorry i was late getting over, spending time with fam today i tried to just return comments...

glad i did not miss this. smiles.

wow - I hardly know how to comment adequately; this is such a tour de force ... very cool ... I was just going to close up for the night but thought I'd read one more ... so glad it was yours

Did Latcho Drom inspire you to write that? You have such a wealth of imagination!

nicedly done ...thanks for sharing

LOVE the idea of no opressors anywhere. Just music and dance. Works for me, now and always!

You weave wonderful tales Glenn. The thought, the effort, the narrative, the rhythm, the cadence...this works on every level.

terrific tale, love the use of soundtrack and the ideas of and oppressor-less world. Very nice job. Thanks

The rhythm, the voices, the guitar music, the heat, it's a whirling dervish of a poem that captures the shared emotions of this community, at once broken and whole.

I'm always taken in by music-related poetry and this one certainly didn't disappoint, Glen. I felt a bit like a gypsy myself. Makes me want to dance.

Marbles in My Pocket said...

This has to be one of the most vivid and entertaining poems I've ever read. It was like watching a scene in a movie, and I could even hear each new piece of the music as it joined the dance. Awesome write!
http://charleslmashburn.wordpress.com/2012/03/15/hes-aggravatin-2/

Great stuff here Glenn. Good narrative, music, and color. Loce the ending moral. You are such an idealist, never would have guessed. ... but really good poem, now where's the prompt part?