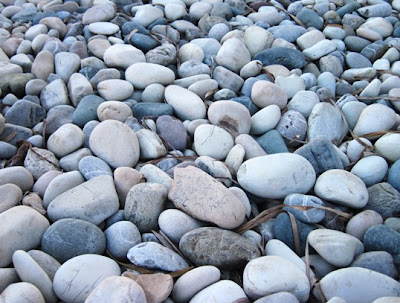 Styx & Stones
The old man grimaced from lower back pains
that stabbed like a squad of stilettos
as he skipped a flat rock across the river
eight times, once for every decade
of his life;
eight rippled rings spreading out
from each other, wider and thinner
until they blended once more
with the moving surface of the water
and then quietly disappeared,
first the loud splash, impact, vibrance,
focus, identity, notoriety, and then
invisibility, down into the deep green
again.
He squatted by the riverbank
for a long time, hunting, until
his strong big-knuckled hands
found another perfectly flat stone.
Rising up too quickly, excitedly,
it took a moment for his eyes to clear,
his nostrils to stop flaring,
his breath to slow down so that
he could hump the harmony,
harvest the heart of the moment.
He tilted slightly to the right
and then snapped the stone
from his thick shoulder
low to the ground and out
across the rushing water.
It hummed as it left his hand,
slicing the air effortlessly
before hitting the water and then
hopped like a sandstone bug,
skipping ten times in magnificent motion,
softly splashing yet barely touching
as it leaped across the rapids,
clear and precise, shining in the sun
for a moment before bouncing hard
onto the startled bank on the other side.
The old man’s heart was skipping too,
ten times lightly, and his smile smothered
his grizzled chin as he stepped boldly
into his next decade.
Glenn Buttkus
July 2012

Would you like to hear the author read this poem to you?
Posted by Glenn Buttkus at 11:23 AM

wow glenn..love the images you create here and the symbolism as well..love skipping stones (even though i'm really bad at it) and love the metaphor you weave

that could be me one day you know...smiles...i love skipping stones...and my back will surely hurt...though i do hope it is more from stillettos...haha...really great capture to of the moment letting it develop sir...

41 emorybGlenn, this is so BEAUTIFUL. Not singling anything out because I love all of it.

So well-expressed, Glenn--and poignant. But I have a confession to make. The first couple of stanzas it was an old woman (me) driving a golf ball into the brink. Aching back, ripples and all!

This is a great line, particularly the alliteration: "that stabbed like a squad of stilettos"

Oh wow, this is awesome:
"The old man’s heart was skipping too,
ten times lightly, and his smile smothered
his grizzled chin as he stepped boldly
into his next decade."

This has got to be my favorite poem of yours, Glenn.

This is beautifully done, vivid, and clear.

I have so many fond memories of skipping stones...and I haven't done it in ages...bucket list item #...well, there's not enough room for all those zeroes! Fantastic imagery, just a wonderful display of more life worth living...coming up against the bank like that...awesome!

"Rising up too quickly, excitedly,
it took a moment for his eyes to clear,
his nostrils to stop flaring,
his breath to slow down so that
he could hump the harmony,
harvest the heart of the moment."

"the startled bank" which almost left its duty to keep him from falling! IMPACT.

A wonderful poem, both read and listened to. There's mystery, movement and long history in it, Blenn.

I really enjoyed the hope in the lines:
"The old man’s heart was skipping too,
ten times lightly, and his smile smothered
his grizzled chin as he stepped boldly
into his next decade."
A great write - great read :)

My Honey was teaching our grandson to skip stones. It's a great thought that 70 years from now, this man could be him. I like this portrayal of a grown up little boy.

I hope when I'm 80 I can still skip stones like that and be as vibrant :) Great story-poem, and he title is perfect for it!