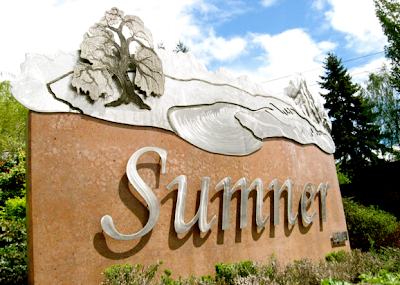 Sumner
Twenty years ago when I lived nearby,
I used to drive through it, marveling
at the well kept yards, the casual
and open smiles, the well entrenched
block watch,
and the comfortable insinuation
that the sheriff was named Andy,
that Gomer worked at the last real gas station,
that Ozzie and Harriet’s former home
was like a shrine to some,
that David and Ricky attended
the mostly all-white high school,
that Donna Reed lived there for a time,
that Robert Young once owned a lot there,
that the newish strip malls were necessary
but slow in developing, and had to earn trust,
that most older couples walked hand in hand,
that even if someone had moved into the midst
of the languid living nostalgia and had resided
there for decades, they would remain
the new folks.
So I was resigned to nodding at my
third generation neighbors who
had grown up there, barbecuing in back yards
with their children and grandchildren,
none of which had ever left or wanted to leave
this garden spot in the valley, hemmed in
by foothills and two rivers, criss-crossed
with train tracks,
and on Sunday mornings when the ten churches
let their great bells compete, even the long
freights and sleek passenger trains
would give a blast on their raucous air horns
to compliment the spirit of that reoccurring
Norman Rockwell moment, and
I would sit on my covered redwood deck
sipping tea, playing pinochle with my wife,
saluting Mt. Rainier as the daylight slid down
its glaciers, waiting expectantly for
my pregnant middle daughter to show up
with granddaughter in tow after services
to continue with the garage sale she was
holding in our yard, creating cash for
care of the grandson soon to join us,
right there in the sweet suburbs
with the big city twinkling on the horizon
I realized that the American Dream
was as alive as you wanted it to be,
as you let it be.
Glenn Buttkus
July 2012 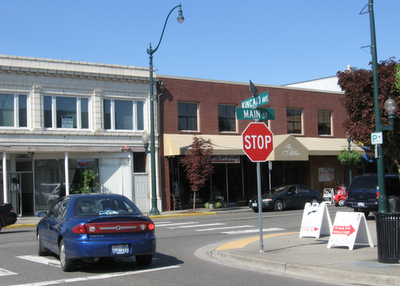 Posted over at Magpie Tales 125

Would you like to hear the author read this poem to you?
Posted by Glenn Buttkus at 10:41 AM

I like your deck church...and the nod to Andy Griffith...RIP...

I thought you would get a kick out of KINCAID street intersecting with Main.

I visited a similar place in your country two weeks ago. I like your positive take.

To recognize and be grateful for what we have. I really enjoyed this wonderful capture of the American dream. Nice to know it still lives on...

This one made me smile with great affection for a way of life.

is it just me or does that sign look like a lady reclining on her side with her back to us? it was sad to see andy pass...been to mt airy or mayberry....it is def a simpler way of life i often pine for...

Andy's hometown is not far from where I live. Like your observer stance throughout the poem... your "deck church" a place to ponder Mt. Rainier ... you have a wonderful way with words.

Dreams are who we are, and so many of us are this. Good when you can get it.

I loved the surprise ending and the backhand-slap at all those who think they live in perfection. It is what it is, and it cannot be defined, contained, or told what to do.

You paint a beautiful picture of an idyllic small town. How I longed for that life when I was a kid. It's nice to know it still exists out there.

Wonderful..what a wonderful life you've depicted here, Glenn. Makes me long for those seemingly simpler days of old. Such a nostalgic collage of a way of life we both experienced and I sometimes long for. Thank you for a great read, Glenn :-)

I like the encapsulation of a life, a territory. Lovely vignette!

A wonderful contentment here, well expressed. I like that deck church also. k.