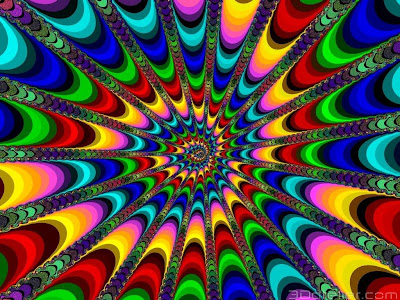 
takes you tripping around the bay,
and brings you back the same day."


In 1954 Aldous Huxley had himself
a mescaline experience, letting peyote buttons
swing open those doors of perception,
and hark the dandelions sang,
blood turned to apple jelly,
a straw dog jumped up and ran out of the room
barking in German, as the amateur drug culture
dawned like coral sun triplets.
In 1960 Timothy Leary traveled to Mexico
into the plexus of the sub-tropics in search
of psilocybin, soon finding those magic mushrooms
drenched in humidity, hiding midst interlocking
fairy rings as he crouched nose-deep in leaf litter
and dying tree roots, chewing the very palatable
caps off thick sticky stipes, watching squads of
earthstars splitting into majestic puffball star-shapes,
surmising that the oyster gods of fungus were guileless
and gilled with black shoelace Asian beards
as he returned to Harvard to be fired
so that he could freely accept the throne
of Love Guru for the teeming hippie hordes.
Whereas I had suffered with monstrous migraine
cluster headaches forever, beyond recall, retreating
to shuttered dark rooms, crumpling into a limp lobster
pose with pillows over my head, until 2006,
when the United States government funded
a double-blind study for Johns Hopkins University,
looking at the spiritual aspects and effects of psilocybin,
and I was invited to participate.
38 minutes post-ingestion my perceptual accesses
swung wide open while listening to Miles Davis,
as the room filled with a thick rope of rainbows,
pulsating with brilliant colors that flashed perfectly
with the clarity of jazz notes, as the angelic halos
around our prayer candles hissed and popped
like sparklers, as the table tops and furniture
came alive and I could see them breathing,
rising and falling to the beat, as I floated
for a lifetime on blissful bosons until
the Higgs Messiah arrived stirring the calmness
with breezy beckoning with me joining
with the gregarious clusters of particles
that flocked frantically to it, creating
mass again, working our way leisurely
back into the room.
My headaches are strangers now,
anxiety just a quaint memory,
God chants behind my pancreas,
death is but a transitory portal,
loving spirits dance in my hallways,
and incredible spiritual well being
rises in me daily as my inner sun.
Glenn Buttkus
July 2012

Would you like to hear the author read this poem to you?
Posted by Glenn Buttkus at 8:35 PM

I LOVE that picture.

"a straw dog jumped up and ran out of the room
barking in German" ... Hi-larious!

"surmising that the oyster gods of fungus were guileless
and gilled with black shoelace Asian beards" ... You really rocked this word list, man.

"crumpling into a limp lobster
pose with pillows over my head" ... And that's exactly how it goes.

"I was invited to participate.
38 minutes post-ingestion" ... Great sound here. Love the subtle rhyme in "participate" and "thirty-eight."

"prayer candles hissed and popped
like sparklers, as the table tops" ... Same here with the rhyme in "popped" and "tops."

"My headaches are strangers now,
anxiety just a quaint memory,
God chants behind my pancreas,
death is but a transitory portal,
loving spirits dance in my hallways,
and incredible spiritual well being
rises in me daily as my inner sun. " ... Oh man. Where can I get some of this?! :)

This poem is super-groovy awesome, and so are you. Thank you, my friend. You made my day.

And isn't it supposed to be "shrooms"? I really wouldn't know, but I would assume. :)

I was trying to be cute with the Germanic spelling of "schrooms", but yes, you are more correct, and it makes the title less ambiguous. As to "deity", I did mean the spiritual aspects of magic mushrooms.

Sorry for giving you a hard time. I love your poem. :)

I did not know that was the Germanic spelling (certainly got your drug-induced spiritual references, though). You teach me SO much about words, and it excites me. Thank you for the weekly vocabulary, life, and history lessons. I adore your work.

I have posted two other word lists since I've had the new blog. Both posts are entitled "Words." In case you get bored and want something else to play with ...

so is this a true story on you battle with the headaches...pretty cool if it is...def the verse where you capture your release from them in felt sir...singing dandelions i am all about that...smiles.

Brian, or Brain, the piece is a total artistic fabrication. I have never done drugs except intellectually, and thank God it is my wife who suffered from migraines.

The transition to a mellow other or a bad trip. Liked where this took me -- sort of the poetic take on "Across the Universe". Those were "heady" days and at least there was talk of love and peace in the air. Like drug trips though, everything turned out to be illusion. Loved the piece!

The last stanza is powerful!

Glenn I was happy to read your comment that it was an artistic fabrication, because I have a horror of drugs, the drug culture and stories of people who fried their brains and sometimes their bodies as well, in search of who knows what.

Your depiction of the drug-induced fantasies was wonderfully well written, but I couldn't "like" this poem.

Oh, demon substances! Do them or don't, write truly about them or just make it up. But a free people chooses many paths to expanded consciousness and to tap into the world behind this one from whence everything arises. And cures can arrive many ways, since the materialist model is a lie that tells only a small part of the truth about what is real. Maybe not drumming though -- not for a migraine! Be well. Your wife, too.

I thoroughly enjoyed this; especially the reading...it felt a little like I was listening to the caterpillar from Alice In Wonderland.

Wow, the pace was strong but not too fast. There are so many images packed into this poem quite like the experience you are illustrating. Lovely job.