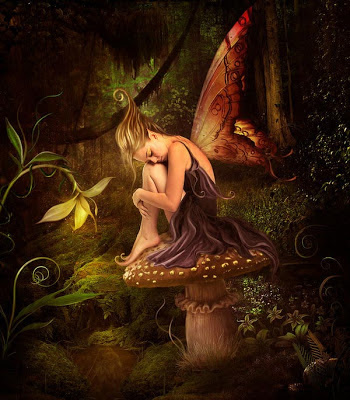 “When the first baby laughed for the first time,
his laugh broke into a million pieces, and they all
went skipping about--that was the beginning of fairies.
---J.M. Barrie

Old Sean squatted on the edge of the meadow,
below the ancient mill, watching its great wheel
churn the spring water into bubbling froth,

never a stranger to the fluidous spirits,
his fantastical remembrances were vivid,
from wee lad to arthritic crone,

he had always been privy to the enchanted
world of Fairyland, the Elementals,
the divers creatures of legend;

He was told as a boy of ten
by a glowing feminine spirit
with a translucent shape,
more condensed air than matter,
radiant and wisp-like,

that his metaphysical awareness was keen,
that his eugenic link to the wee folk
was traceable, telling him her kind
could not lie, were capable of prophesy,
were incapable of malice,

but that he needed to be aware that some
of their diminutive ilk were pranksters,
demoted cherubs, shape-shifters,
& changelings.

As twilight approached he did inventory
of his many charms of protection,
patted the four-leaf clover in his breast pocket,
sat very near running water, clutched
his pigskin pouch of rowan bark, carried
several crusts of dried bread,
wore his vest and jacket inside-out,
had a broken knife blade made
from the finest flat cold iron, guaranteeing
his safety as these things were shunned
like poison by the less chivalrous of spirits.

As darkness settled in gently, he smiled sadly,
recalling that his lifelong insights & interaction
with these creatures had been exquisite,
exhilarating beyond measure,
but it had been his bane as well, forever branded,
defined by others as a batty eccentric,

All coming full circle that night, for
at the witching hour he would sing
his death song, would sip deeply
of several fairy potions, then
would morph into insect proportions,
would sprout colorful wings,
would be carried like a fairy king
on a divan of rose petals,

for his initiation was completed
and his ethereal existence,
his actual life awaited him,
first into the delicious darkness,
soon to be reborn
into the light.

What a great tale, Glenn! I enjoyed every word. The last two stanzas were my favorites. What other-worldly promise you end with.

great images in this...and a story well told..a cool metaphor as well for the question of belonging and where we feel where we should be..nice

there is a wonderful magic that runs through....i feel his being branded eccentric...but would i trade that to still commune with those that many lose once they 'grow up?' i probably would...smiles...

Well...quite frankly, poet...I just love you more and more with every read. With a few twists and turns, I could have written a similar tale about a little girl of ten...but we'll save that for another time ;) LOVED this!

I can almost feel the fairydust in these lines...shining elvish images:) It has brighten my evening here :) love it :)

There's magic in these lines Glenn....

What a gorgeous ballet this poem would make. I love it.

Great! I'm with the lady above me...it's artistically written.
gardenlilie.com

In the spirit of W.B. Yeats, a fairy story as deep as any Irish one - the trail of them is long and literary, yet yours is unique among the ones I've read and I'm there as I read it - watching the transformation. I believed every word!

Good story! Worth expanding on??