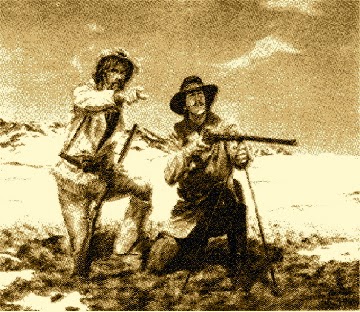 1(medium wide shot) hold on the Saloon set-up allowing
Buck to cross the frame left to right, from the front door
to the foot of the stairs.
2(sound cue) harmonica & banjo.
3(traveling crane shot) panning the startled faces of a couple
dozen men & several saloon girls:
--you crazy sonofabitch!
--who the fuck is that?
--he’ll be dead by nightfall.
4(medium close-up) Buck taking the stairs two at a time.
5(medium wide shot) Buck arriving at the landing
6(sound cue) snare drum snaps.
7(2-shot) The bearded bully guard from the tower with a shotgun
leveled at Buck.
8(shot expanding to 3 figures) as the blond whore from the adjoining
room peeked out from behind the guard.
9(sound cue) saxophone, short staccato notes.
10(medium close-up) the bearded guard:
--You done it now, Buffman!
--Buck: Done what?
--Guard: If you’re looking for trouble, you found it
in spades.
--Buck: Actually, asshole, I’m looking for my pants.
11(angle on) the blond whore, mascara running down her cheeks,
eyes red from crying, shaking with rage & fear.
12(extreme close-up) the twin barrels of the old shotgun pointed
at the lens, filling the frame.
13(close-up) Buck, his face composed.
14(close-up) the bearded guard: Emma here says that you broke into
her room & murderously assaulted one of her best customers.
15(sound cue) violin & accordion.
16(medium two-shot) the blond prostitute stepped out from behind
the guard, her dress half torn off, her left breast exposed, her right
eye swelling from a new bruise.
17(close-up) Buck: she’s confused.
18(close-up) bearded guard: bullshit!
19(close-up) blond whore: fuck you!
20(close-up) Buck: then she’s a liar.
21(medium wide shot) revealing Millie standing three
risers up behind them, not saying a word.
22(medium close-up) blond whore: you crazy motherfucker--
you might have killed my Paully.
23(sound cue) a scream of insane rage.
24(sound cue) coronets & screaming.
25(three-shot) the diminutive blond rushing toward Buck,
her fists clenched, her arms windmilling.
26(medium close-up) she scratched at his bare chest & stomach,
then pounded on his legs, her arms a flurry;
27(sound cue) a woman’s blows connecting, with her huffing,
& grunting while delivering each punch, competing with blues
guitar slides.
28 Buck does not defend himself, stoically accepting the
silly pummeling.
29(close-up) Buck’s face, staring unblinkingly at the guard.
30(close-up) the guard, his eyes wild, his teeth clenched.
31(medium close-up) the blond whore, suddenly exhausted,
collapsing to her naked knees, her arms at her sides.
32(sound cue) banjo & acoustic guitar.
33(close-up) blond whore, eyes shut, whimpering:
you killed Paully--you killed Paully....
34(two-shot) suddenly the whore comes to life, aiming
a short vicious jab at Buck’s crotch.
35(sound cue) pair of clarinets, high notes.
36(medium close-up) Buck backhand-slapping the woman,
with his left hand.
37(sound cue) the loud slap.
38(close-up) Buck drawing his Colt .41 with his right hand.
39(sound cue) a pistol pulling out of a shellacked leather holster.
40(close-up) the guard pulling the shotgun triggers.
41(sound cue) Two shotgun blasts & two loud pistol shots--
simultaneously.

Posted over on dVerse Poets OLN129

Posted by Glenn Buttkus at 8:20 AM

ugh you know... he shouldn't have slapped her... and i wonder who killed who now... vividly painted scene again...though honestly...i'm glad i didn't live back in the wild west time...

I am really getting a vivid picture of this Buck...and I am not sure I would be hanging around with him if I lived back then. LOL.

A fast-paced scene... the flurry of event after event is intriguing. Loved the vividness of your words.

oh man...cliffhanger end...the tight shot down the barrels is a cool touch...its authentic...and i could not help reading it quick...nice action...

You leave us at this stage of suspension... hmmm wonder if Buck got a buckshot hmm

I think it was Richard Conte in the film "A Walk in the Sun" who kept saying, "Nobody dies." >KB

yikes, quite the cliff hanger there... holding my breath til the next installment!

You left us hanging at the end there! Well done :-) I loved the face pace and the cues helped set the scene perfectly. It made me read fast to keep pace with the action.

Time to get out and leave, run away is the best form of attack. Nicely done

i never thought to pursue the history
of old saloons..
this matches gun smoke
well..and a little wild wild west
as well..
But perhaps it was tamer than
that..as human being tend
to fear
death...
i guess i got a date with Google
to learn more about
that...

The windmilling arms and the acoustic guitar lingered with me long after the chaos of action concluded.

have to read this fast and then BAM! the cliffhanger...excellent.

Ah great read. Does everyone die? What was bucks real name? So many questions! Love it

“Cunning & treachery are the offspring of incapacity.” Exactly. Vivid piece.

I read this and wondered all the time - how could there be such immense details in a poem? The canvas was too rich - took me to a different level altogether.

Reading the Cole and Hicks books by Robert B Parker, this scene could be pulled from one of them. Well done my friend. Can't wait for the next scene...

On the edge of my seat! Well done!

You had me at 'Buck.' LOL What a ride to the wild west you bring us on. Lots of action and fighting. Nice work Glenn, especially that great ending.