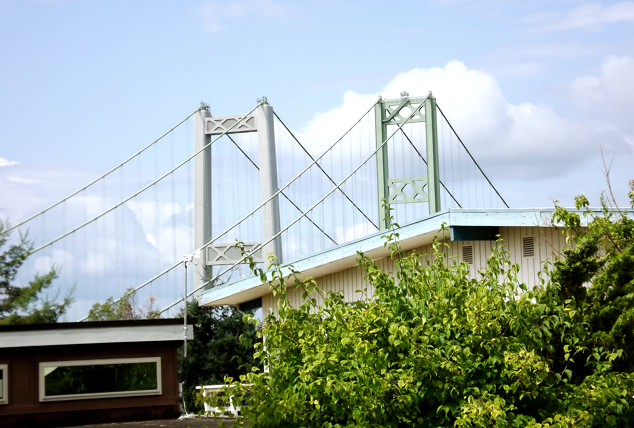 “The grave is but a covered bridge, leading from light to light,
through a brief darkness.”--Henry Wadsworth Longfellow.

When great bridges sprout in people’s yards,
they intimidate the perspective.

The metal gate was betrayed by rust and an
ineffective padlock.

I love those odd places where line and texture
finally procreate.

I swear I met a troll named Red Sammy
under the bridge yesterday.

An antique brass street clock stately stood in
a neighbor’s hidden back yard.

A plywood pallet stoutly supports both
of our refuse containers.

That day, all the sagging windows wore
identical white uniforms.

Would you like the author to read these American Sentences to you?

Glenn I thought your poem was truly inspired. Beautifully written. I like the way you taxied down the runway at first and then just let go. Really a pleasure to listen to you read it as well. >KB

I love the trestle bridges of old-time American railroads. They're just not the kind of thing we would ever have allowed in the old country ... smiles.

Of your sentences, the betrayed gate is my favourite, but you have several other fine lines here.

I so got into metal bridges this past year... maybe it's their strength... your piece showed that sense of strong voice

nice...love how you put this together brother...all the details...ha its fun when elements come together that usually dont as well...we have a guy up here with some really interesting yard art...just saying...a 10 ft flip flop.....

The metal gate was betrayed by rust and an
ineffective padlock

This was fantastic! I loved this line in particular:
"I love those odd places where line and texture finally procreate."
I could see that perfectly in my mind's eye.

Oh these sentences were truly perfect.. Especially the sunflower one... We are both lovers of these American sentences

Terrific verses Glenn, I specially like the ferris wheel, sunflowers and sagging windows ~ There's power in those verses which you can further expand, smiles

Ah, the fascination and metaphoric potential of bridges. How nicely you've rendered this one. I love reading and working with the American Sentence.

I especially like the final couplet. Well read, too ~

You really write what you know and see, Glenn. This is obvious in this poem.

Really great American sentences...I can't pick out a favorite - love them all. Like the reading also.

I like the idea of the images not really belonging...like the bridges sprouting in people's yards, etc. Love the troll under the bridge too. Strong and intriguing images throughout.

White snow and rusty things all make for the American scenario in many a backyard.One can't really make them out before the snow drifted. Very real and very well crafted Glenn! Great to listen in to complement the pic!

I love the mental image of line and texture procreating.

All very well done, but I especially enjoyed the last image. Excellent!

A really wonderful play with words. Most enjoyable.

"Where line and form finally procreate" … I find the older construction to be most interesting - a time when people took pride in their work. You have a fine eye for detail and it sits spendidly in your poetry!

Did you know that that you can earn dollars by locking selected pages of your blog / site?
Simply join AdWorkMedia and run their Content Locking tool.