Home From the Hill 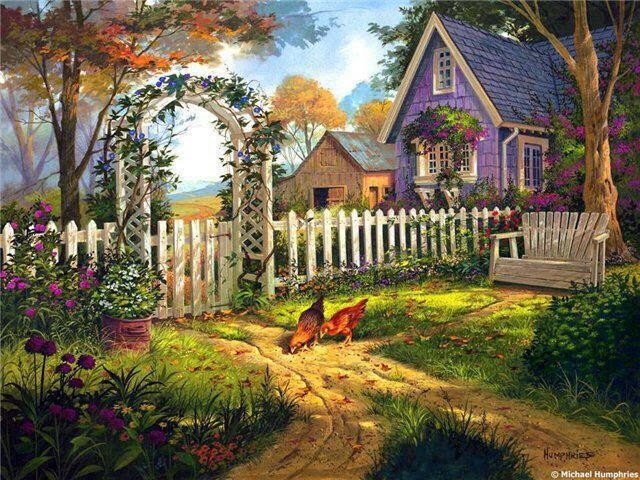 Home From the Hill

H  O  M  E:
A residency,
a place where one lives,
a dwelling,
a hogan, teepee, or tent,
a crib, a shit hole, an abandoned
building, under a bridge, the mean streets, the planet, a warm place where
a family unit can keep out of the storm,
an undiscovered country,
a dot on the landscape,
a red roof with two chimneys as seen
from some Google satellite;

A brick house next to, & rented from
A Baptist church in Ballard.
Another house in Greenwood, with
a grapeless arbor leading to dead grass in the backyard,
with a low roof over the back porch,
that I could walk out on from my bedroom window,
& pick the ripest pears from the top of a majestic tree;
A Victorian farm house in Coventry,
when it was still country,
next to a large barn where I learned to play
handball, with a wide creek crossing
the south end of the property, where we were
serenaded by a bullfrog chorus nightly,
& up on the hill, into a green belt, that tree house my little brother
& I built from saplings,
short fir & alder branches, pounded
together with huge nails we found in a rotting bag
in the barn, strung between four Douglas fir,
used thrice, then forgotten.
Another farm house, this one rudimentary, near
Panther Lake, built up on stilts, with plenty of room beneath it
to pile our extra junk,
where we actually had to use an outhouse,
summer & winter, & I had to chop the wood
for the two wood stoves, slicing into my foot once with a hatchet,
where my loving grandfather, who
felt sorry for our pioneer plight,
came out for over a month, dug us a cesspool,
put in a septic tank,
and installed a real toilet on the back porch,
where we had to hang Army surplus wool blankets
that smelled like gun oil & stinky feet for privacy.

A large wood frame house right on a main street,
across from a park, one block from an elementary school,
rented from Delridge Auto Sales next door,
that had a three car garage, where
my Dad, trying to please my sister,
bought an old swayback mare, kept it in there,
so that we kids & our friends could ride it
up & down the alley until the neighbors complained &
one afternoon the cops came & spirited the nag away;
where at 12 years old I was given
my first car; a 1939 Buick, and instructed
“to take it all apart, then put it back together again, so that I could
learn about such things.”--which I did, spending two months
creating big piles of doors, fenders, & engine parts;
but what I actually learned was that
I had no viable mechanical aptitude, & could not put it back together
again--disgusted, my Dad tossed all the parts onto
the naked rusted frame, & had it hauled away.

Ten elementary schools,
three Junior Highs,
two high schools--and although we never ran around in colorful
Romani wagons
or lived in a storefront,
gypsies we were;
so when I think about Home, it was not ever
merely a structure, it was more a place
where my heart resided--
for it became my own responsibility
to calm my restless spirit,
to put down roots,
to work for one employer more than twenty years,
to find the right person to share my life with,
to raise up three daughters,
to create a semblance of permanency,
a place where grandchildren can visit,
where old bones could find solace,
where a heart could memorize lullabies.

Would you like to hear the author read this poem to you?
Posted by Glenn Buttkus at 10:48 AM

very cool structure to this...i like how you start very generic...with almost definitions or labels and then make it much more personal...when you made that first shift it made me sit up...also made me think of those places i have called home...nice way to bring it back down there in the end as well g...

Great story that span generations.. I love the stories within .. the old car you failed in putting together the old mare.. and I assume your resolution to get something a little bit more stable.. captivating read Glenn that came direct from your heart.

Well done Glenn. Coming home is always a journey even if we never go far. >KB

I feel like I just had a tour of your home, where you lay, also the home that is your dear memories. Immaculate details, my good man.

WOW! What a fantastic journey of a poem! I can see why you would grow up wanting to feel settled. I cringed at the axe slicing your foot, wondering how far away the doctor was. Great write, Glenn.

"My home is my castle," I believe you say. (*smile*) I believe such a raising you describe may give a resistance against the keeping of values. The terror of people calling themselves Christian today, is the insistence on values.

Excellent writing structure my friend. lots of memories for many generations to come.

A home is more than just a dwelling or house but where the heart is, where we build our roots and raise our family ~ I like the personal share Glenn ~

Lovely the way this unfolds taking us to your heart and home. Enjoyed it very much.

I didn't realize that homecoming could bring so many wonderful memories alive - there is such a big canvas and so perfectly portrayed.

a victorious place where you've decided what is important.

You are the amalgam of all these homes, they made you the poet that you are. I really enjoyed reading of your varied homes amd what you did there.

I remember taking my 1933 Austin 7 engine to bits on the kitchen table when my folks were away, and the rumpus they kicked up on return.

I'm a bit of a gypsy myself and have had more than 20 homes in my long life.

A complex, comprehensive journey to and through homes.

Having set up home 33 times in 44 years around Australia and the world, I know all about the journey to home and through homes and have also learned that home is where you are....

"where a heart could memorize lullabies."
Lovely thought conjuring home and hearth, stability and permanence--the antithesis of your wandering childhood. You've led an interesting life, Glenn, one which a person whose youth was spent in one house in one town has a hard time imagining. Great write.

You brought us together retracing back the good times and experiences never to come by again. Such a wonderful childhood and such a wonderful life to store up as memories. Great write Glenn!

you sum it up well here... home is not a house but a place where we are with the people that mean something to us... though my fav home always looked like pippi longstocking's villa kunterbunt - ha - smiles

Great use of 'homey' phrases :)

For someone who says it isn't the structure, you moved us only slowly inside in this slow dance with homecoming and inventory. Structurally satisfying, your writing moves us from the surface into the depths and out again.

I enjoyed reading this great story on the different dwellings you've occupied. I was most intrigued with how you were commanded to take apart and then rebuild your first car at age 12...what?! I liked the story of the old nag too and your grandfather building you a cesspool with a toilet installed "on the back porch." You gave us so many vivid illustrations that shared so much of your life. Loved!

My Oh my....we are the sum of our experiences and yours are wide and varied, a hodgepodge. ..stretching the spectrum. No wonder you write with such wisdom, awesome tales & poetry!!!!! I feel the depth.

I hear ya! As a child we also moved a lot, between countries as well - and that restlessness has continued in my adult life, whether wanted or not. Home is most definitely where the heart is, but also in all of the places where I've left my heart. I love your notion of layers, of facets, of multitudes.