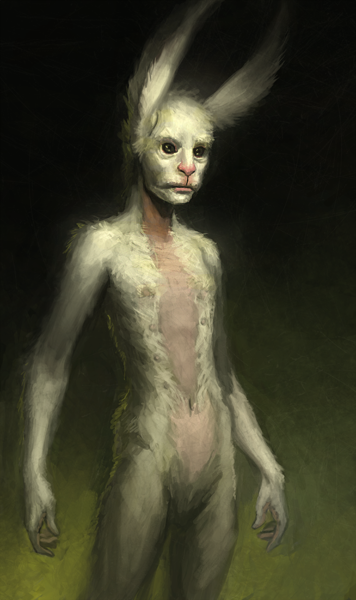 “Life is the grimmest & the merriest motley of  phantasmagoria
that will appeal to the gravest or maddest brush ever brought
to palette.”--Elizabeth Stuart Phelps.

For Harold Hare, the cities
where made up
of burrows;
and he never subscribed
to the notion that some creatures,
like sea horses, beavers, slugs & lady bugs,
endorsed; a silly theory
that cities were made up of burroughs; absolute clap trap.

In his harried world, fantasy
was not an illusion. Superman did wonderful
commercials for laser & spandex corporations.
Spiderman opened up a chain of
Exterminator Companies;

G.I. Joe & Sgt. Rock were WWA superstars.
Miss Buffy was a bed bug,
& she was skilled as a dust mite slayer.
Commericial icon Flo was banned
from ever mentioning any kind of insurance again,
& she became allergic to bright red lipstick.

All cars could talk, could
hold intelligent conversations with road graders;
none of this Your door is ajar crap.
John Deere ran for political office
& now is the senior Senator from Iowa. Alligators in Florida
& Louisiana went on strike, & the Everglades
were closed down & sold to Bill Gates
who turned it into a popular nudist colony.

Red dragons were discovered,
living in exile in condo caves
within Mt. Olympus in WA state,
& CA petitioned that they be returned to the Redwood Ghettos,
a place, according to a dragon spokesssserpent,
“We would rather burn down to red stumps than
be forced to live in again.”

Batman is selling gentleman’s dress capes
in a new department store in Cleveland,
while Robin, now grown up & bitter,
has shaved his head & turned
to the dark side, becoming a leader in a Neo-Nazi
compound at Hayden Lake, ID.

Captain America suddenly aged tremendously,
becoming 93 years old--something about
his Comic-Con expiration date;
so Ted Turner, ever the humanitarian,
hired Cap to be a
military consultant for CNN.

Air Bus is now manufacturing personal jet packs for commuters,
and has been testing them          in the busy skies of Liverpool,
but there are nasty rumors
that drunken fliers have been buzzing innocent
pedestrians, & pouring state beer
on baby buggies.

Yet another revival of the musical CATS
has been picketed by urban cats of all stripes,
carrying small signs that read:
Musical theater is demeaning to all felines.”
Fritz, the lead yowler of the punk group HAIRBALL HAREM,
is doing free concerts to raise funds for this effort.
Broadway producers have hired
Lassie & Rin Tin Tin as lawyers,
& we all know this high-powered duo of litigators always
get their teeth into the posteriors of the opposition.

Breaking News--Harold Hare is considering
putting together a luxurious line
of Lewis Carroll fashion jewelry, & he would welcome any
& all investors to step up ASAP.

Would you like the author to read this poem to you?

Harold the Hare is certainly an attractive character. Ha. And Batman selling dress capes makes me smile. And I wonder if those chicken prostitutes in Detroit have much business. You certainly provided us with a feast of imagination. Fun to read, Glenn. And I am excited about being #1.

I wonder whether Harold Hare's business will take off. He may have found a niche. I must say that after reading your poem, I feel quite concerned about the welfare of chicken. Shouldn't we contact PETA?

Glenn, this calls for Depends! I laughed out loud. Especially grateful what you did to Flo. She drives me crazy. But this calls for another read. Maybe to print it out. Fun, fun, Fun!

ha. i could totally see john deere getting the votes that he needed in iowa...lol....and that the cats find the theatre demeaning...well glenn beck would know, you know...ha...this was a trip!

This is hilarious. Honestly, you'd do well in a genre of spoken stand up comedic poetry, or something like that. Love the chicken part. Thank you for the laughter.

Lewis Carroll fashion jewelry...ha...how would that look... very cool take glenn..love the many many characters you wove in and how you told us their true story... thanks for the smile...

You have created a world where the only mandatory suit is the hirsute.. so many great pictures.. and there is a difference between chicks and chickens.. and the cars as well.. I had quite an intelligent conversation with a rusty old Volvo the other day..

You my friend have created a vision of our dreams and places of new life. I love this piece by you sir. :)

those theatre cats can go to hell - I'm with the urban felines, man... And poor Robin... Must be tough for the old sidekick

Oh no Robin has turned to the dark side - Glenn, your fantasy is a delight!

Wow, you are so imaginative Glenn ~ Enjoyed the fantasy turns of your superheroes & comic characters ~

Glenn, you had me laughing so hard! Oh my goodness, hilarious, creative, brilliant...made me think of a Simon & Garfunkel song about the zoo...loved the lawyers Lassie and Rin Tin Tin, and Colonel Sanders as a Pimp Daddy!

I love the way you can build image upon image--the way your mind makes connections is a sight to behold! Great read here.

wow...wow...& wow! quite impressive. that is definitely one interesting set of burrows... I'd like to see some samples of the jewelry before I consider investing.

hmm..in someways i am expecting the dragon trail..but instead of a tale of change comes to all who enter into a culture of chaos..but random know..:)have a great day..in random thrill!..iS what i like to have every now at least! with thrill of small..and forgetfulness of large...:)ly true...

very amusingly crafted! harold seems like a astonishing charcter to me!

You certainly put an interesting spin on a out of familiar characters! :-)

Man o' mighty, you go all the way! Good, very good cutting stuff, from those chickens to that git. There is always so much happening. I just am not able to pick up that richness when I try.
Lost my reading glasses is my only worry, must find them for more reading - there's a big difference without them!