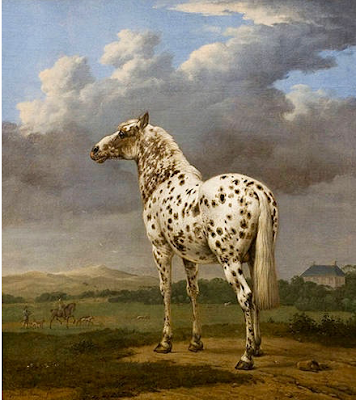 “Perhaps the habit of intrigue is infectious--in the
air or the walls--like secret passages in the mind.”
--Susan Kenny.

1(cut to medium wide-shot) The two men riding double on the big Red,
with the white stallion limping slowly behind them--on a tether held
fast by the Eagle.
2(sound cue) banjo & guitar.
3(two shot) the pair riding at a walk toward the camera as it moves
ahead of them.
4(tight two-shot) angle on Buck: We need to take it easy on Jesus, but
that’s fine; probably get back to the ranch after dark.
--Johnny: Damn, I feel estupida; almost busted my culo.
5(close-up)angle on Buck: Consider your self twice-lucky, old man, that
no bones were broken. If my big ass had hit the ground that hard, we’d be
pulling me home on a fucking travois.
6(angle on Johnny)--Nice idea, but what would you have made it out of--
cactus & horse shit?
--Buck: Hell, we probably would have tied your arms & legs to a couple of
brush poles, & I would have laid out on top of you.
7(sound cue) harmonica & piano.
8(medium close-up) a pair of prairie dogs standing tall watching the riders
in the near distance.
9(two-shot) angle on Buck: So what about the Appaloosa? Should we hunt
him down, & bring him to ground with a .50 caliber slug of pure vengeance?
--Johnny: Oh, maybe not this time. I got an Apache hunch that one fine day
he will wear the ABuck brand.
10(close-up) Buck: Christ, wouldn’t that be something! But, sombitch--catching
him is like roping a daydream.
11(cut to a two shot) angle on Johnny: I hate to stomp your spit-bubble,
Boss, but I tell you, I really don’t think we can ever run him down. We will
never catch him.
12(close-up) Buck’s face; a wrinkled brow--Does the mighty Eagle, the
grande horse master, the maldito wrangler just give up so easily?
13(sound cue) Indian seed rattle.
14(cut to CU of Johnny) smiling, with his dark eyes twinkling: Chinga that
notion, my Buck. This great mancha will be yours. It’s just that we will need
to trick him, you know, appeal to his cock, & not stir up his fear & pride.
15(angle on Buck)--You mean pony express him--bring fresh mounts with
both of us & hop aboard them mid-gallop when our stallions are blown out?
16(angle on Johnny) --Sure, sure, that might work, but I think that
even then that spotted stud might still run them, or himself, to death.
--Buck: Then how should we do it? Smoke & mirrors don’t impress
a flying demon.
--Johnny: You know that our bad boys are swift; goddamn fast, as
quick as any hammerhead in these parts--until today. That devil
ran our studs right into the ground, race over--& I got the hijo puta
bruises to prove it. He runs like a crazy mountain puma with his
prick on fire, he leaps into the air, flying with his hooves off the ground,
like something out of shaman legend. He gallops like the firewinds
of hell. He is Chatawa.
17(sound cue) harmonica, coronet, & Indian tom-tom.
18(close-up) Buck: Yes, Chatawa--nothing faster, nothing stronger.
--Johnny: Hey, we’ve got some sexy brood mares back at the ranch--
especially that pretty little palomino bitch.

1(cut to an overhead drone shot) The Appaloosa was loping smoothly,
not in a rush now, halting at the head of a deep gulch.
2(sound cue) a horse herd milling about, hoofbeats, snorting, whinnying
sweet & low over some guitar riffs.
3(cut to a medium wide shot) POV over the heads of a herd of spirited
mustang--fifty strong. In the distance we see the Appaloosa galloping
out of the dim gulch toward them. Several mares see him approaching
& they let the others know.
4( medium close-up) a fat diamond back rattlesnake that’s wrapped around
the gray dusty branches of some sagebrush.
5(sound cue) blues guitar slide & harmonica huffing.
6(cut to medium wide shot) as the Appaloosa gallops past the snake, over
the top of a stationary camera.
7(cut to an overhead drone shot) above the stallion as it rushes to rejoin
its herd.
8(sound cue) snare drum beat over horse’s hooves.

Posted by Glenn Buttkus at 7:19 PM

Oh I think they will manage to find a great lure for that fine horse.. I think three of them will win against the bad ones.

Love the banter between the two men. I also really enjoy the little touches of reality that you pepper your "Blackthorn" pieces with...such as the prairie dogs and the snake. They aren't really needed for your story, but they add a touch of authenticity to the whole scene.

I don't follow the continuity a lot - but I like the oozing power, the horses, the intensity and specially the uniqueness of your form with such rich visuals...

And the saga continues....or should I say the drum beats on!

The dialogue is so fun, like getting pulled into a painting that talks around you. I hope you write scripts. You'd be great at it

I almost couldn't get past the image of that gorgeous horse. I have a thing with horses and I'm fortunate to have some just across the street from where I live. You do such a good job with dialogue, but I suppose that's just an integral part script writing isn't it. And that's definitely your strong point.

We will see if they will succeed, smiles ~

Glenn, meaning no offense, and I may have said this before, but though I like the idea behind what you do using the Blackthorn screenplay motif as a vehicle I find it hard to comment on it. I like your other work much better. But that is just me and I do not mean to take anything away from the quality of the writing. >KB

I can dig it, KB. We all have our tastes & mind sets. Perhaps one needs to be a movie buff, or ex-actor, before they can embrace this Cinemagenic form as "Poetry". But it is a saga, an epic work, transcribed from own novel. It is unique, audacious, arrogant, technical & an alien landscape for some. I'm honored that you slog through it, & still see the qualities within, regardless of reaction.

I love this style Glenn... and "roping a daydream." is a great phrase...please make the horse win!! :)

Once I saw the open link night I had to come back and read another segment. I like reading these as your imagery is amazing. I feel myself being pulled into the story. You know sometimes those dreams are near impossible to rope. It is def an epic saga and I'll just keep reading until the journey ends.

Smiles.. Glenn.. one of my favorite
chapters here continuing
about the Appaloosa
who refuses to
bow to anything
less than wild..
i suppose
there have
always been these
trouble horses.. who
refuse the rein of others..
wind carries manes of free
and there's a song for that
from Gino Vanelli now as
well.. smiles again for now..:)

You realize of course, because you were away, we need two of these together - we were cheated!!! Oh how I love the description of the horse - I so love horses! I like this movie a lot. My bet is on the Appaloosa. I so want him to win the baddies to lose! you were most def missed.

That Johnny sure has a turn of phrase...
But what a gorgeous horse - that painting is simply beautiful, as is your painting by words.

Great dialogue leading to well-developed characterizations, but the horse has gotta win. (Spit-bubble is a keeper.)

A grand specimen Glenn. The unique pattern makes it all the more grand. Fascinating cowboy talk it is!