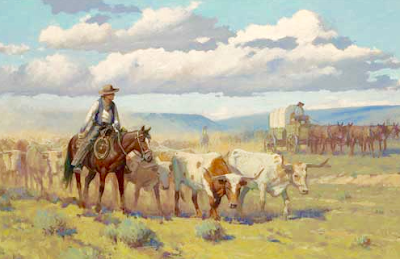 “Beyond a certain point, the whole universe becomes
a continuous process of initiation.”--Robert Anton Wilson.

In 1871, Bobby Dunstan had heard tall tales of cattle drives out
across the Great Plains since he was knee-high to a milk bucket.
He was the eldest, growing up on a small horse ranch about five
miles out of Ft. Griffin, TX--so he was the first to be able to leave
home on a cowpoke adventure.

He was 17, & tall as a healthy stalk of corn; more than anything in
this world he wanted to test his grit on a real cattle drive. His father
let him take the mule, Old Gus, & it was a long 75 mile ride up north
to the Red River Station at Spanish Fort; only a three day trip as the
hawk flies. Soon the blisters on his backside made him wish that he
too had wings--but the rough ride readied him, making his insides
rawhide tough.

His experience with horses paid off in aces, for he was hired by the
Burning B bunch literally the day he arrived in town; made head
wrangler, in charge of a 100 horse remuda, plenty of broncs for the
dozen cowboys that would drive the 2,000 head of longhorns 24 hours
a day. They would use the popular Chisholm Trail all the dusty way up
to Abilene, Kansas--more than two months work at $40.00 every month.

Red River Station was the jumping off place for dozens of drives that
Spring. The seasoned hands in his bunch were wild-eyed, but all of
them seemed to possess a clarity of purpose. Before they hit the trail,
he willingly swam naked in the Red for his initiation. They were damn
lucky that late April because the river was running shallow, & they stayed
off the sand bars, & avoided the quick sand--because he heard that a
week later after a Texas rain squall, it became turbulent & treacherous.

“Abilene or Bust!”
the pokes yelled, spurring their mounts
north up the Chisholm.

Posted by Glenn Buttkus at 9:41 AM

I read your great poem Glenn. My internet provider is not being cooperative today so I will comment here. It amazes me how many directions the words of the prompt lead. When you write of the West it takes me back to my youth when horses and dude ranches were our favorite vacation. Your ability with words hurls me right into the saddle. Oh, those blisters.

The tone you set in your writing is well matched to sound and rhythms of your voice in the recording. You set a good scene. Both remind me of the Westerns I read as a child (and still read occasionally even now). Thanks for your visit to my site.

Yes really submerged in that dusty scene and world - don't fancy the blisters though - ouch!

I don't think I've ever read a "wild west" haibun .. this was a really great experience and I really enjoyed the read. Thanks for sharing it with us! Bastet

Hi Glenn. If you go on the dVerse site, you will find the three photos Mary has for the haibun. The link on the page comes to this rather than a new haibun for the photo prompts.

Yes, I'm aware of the image prompts, & am writing to one of them now; but this haibun, which is about "water" needed to be seen by some as well. This for the reminder. I commented at dVerse, declaring my intentions.

Looking forward to the one that meets the prompts.

Someone had to be first, writing a wild-west haibun.. (and it had to be you)... Myself I have declared the gritty citiscape as my territory... :-) I know those treacherous waters.. really.

Thanks for sharing the haibun that you wrote for the Sunday Whirl. I understand wanting people to read it. But......as I am interested in seeing what people write to the photos provided in the dVerse haibun prompt, I will wait with my comment if you write for that one. I know you will understand....

I love your Texas twang there cowboy! I don't envy that tough way of life back then but I love how you tell a story wrapped up with my first ever Wild West haiku!

Well.. first of all
the Internet really
sucks when short
term rules are more
important than long
term gifts.. in NOW..
and your poetry now
is a gift God damn
it and so is mine
God damn
it God sTill
Loves weeds
that refuse
to stay
out of
high class
lawns.. winks..
'sorry'.. you know
i have a history with
this.. and you rarely shut
people up or down.. so i
sing my song here.. of
serious disgust..
anyway..
i
revel
in being
both human
and free to say
these things in areas
that are open-minded
and not closed
to different..
as there
is truly
nothing
to
lose when
one truly is free.. now..
and that is the spirit of
the wild west my friend..
the nomads.. the movers and
shakers among us.. who move
away from the Middle
of Africa
and go
as far
as South America
where dancing naked
and free on beaches
iS jUST
a way
of Life..
I am an Indian
of Rain forest now
in a New Jerusalem
once named hell.. and
truly where i live mirrors
both of those historical
places so
well now
as what
i find
here
at times
my friend..
Glenn.. now..
so sure i am
used to it as a weathered
open minded liberal
Indian or cowboy
in conservative
hell where
sticks
in mud
flower
the
same
over and
over again..;)

Trivia note.. the
first white settlers
of Milton where i live
named it hell on the
river where i live
then.. as
the briars
will poke the
hell out of you
and yes.. they still do..

And 'that' is my extra long
Fredbun Haiku at the end..
now.. Briar and Friar free..;)