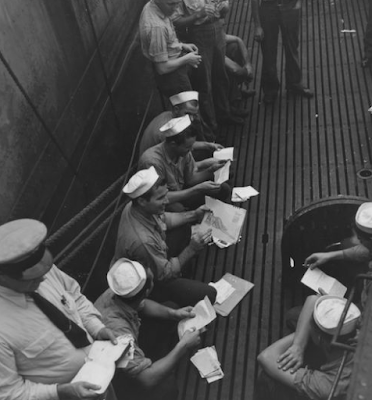 “You’re a disgusting fat slob. Sound off like you got a pair, you
useless, grabasstic pile of civilian dog shit.”--R. Lee Ermey.

In 1966, during Navy boot camp,
I stood at Mail Call
becoming a chunk of driftwood
that others stepped over & on,
not noticing my empty hands,       or mile-off stare;
still seeing my mother
baking bread & cinnamon rolls,
cooking fiery chili slowly all day,
waxing a thousand square feet
of hardwood floors, & folding all
of our laundry & putting it in our drawers
before she bathed,
& dressed up like she was getting ready
for a date; make-up, jewelry, perfume,
every afternoon, to please,
to greet
to genuflect for
my asshole stepfather--a perfect
conglomerate of Archie Bunker & Stanley Kowalski,
who looked like Tony Curtis, dark & handsome--
her third husband,            another loser,
another ignorant Lothario,
another felon,
another batterer, but
she really was in love with this one,
with his muscular body & tattoos,
his James Dean 1950 black Mercury fastback, &
his Brando leather motorcycle jacket & aviator sunglasses,
before, of course, she found out he had cheated on her regularly
& had been raping my little sister since she was twelve.

I did receive a few letters from my grandfather & my sister, & my girlfriend,
who was using my absence as a catalyst to break up with me during that
13 gut-wrenching weeks of boot training before Viet Nam, standing alone
& invisible midst the colorful chatter spilling out & clogging the room from
those lucky boys whose mothers had written them, & God help me, during
that dark time part of me became blind, had amnesia, standing as a statue
covered in bird shit with folded arms, with lowered gaze, with ridiculous
expectations, convincing my self that if I pretended hard enough, wished
with unbridled enthusiasm, & focused with all my soul on my mother’s face,
that somehow, maybe, miraculously a loving letter from her would actually
appear, but the troll on my right shoulder was eager to point out that
my pathetic pretense was 100 days deep in fallacious misplaced
moronic bloody lying hope--because another part of me had watched
her die three months before I had spent my June birthday as a boot,
turning 22 silently, without detection, & I could no longer recall her
beautiful face--all I could visualize was the cancer, the watermelon-
sized tumor in her uterus, leaving her frail body emaciated, her mother-
bones poking out of her paper-thin skin, a beauty contestant in Dachau,
dead at 39, so riddled with tar-black carcinogens that my grieving
stepfather had no funeral, just had her cremated in private, he & her
urn & a case of beer.

I now use his name;
adopted as mother’s wish;
millstone & penance.

Posted by Glenn Buttkus at 8:32 PM

The name of this man ---> A millstone indeed. The man has no redeeming qualities at all.
And as for your mother, what sadness to have her die so young in such a horrific way!

This is so much emotion without even expressing the words.. The direct way of telling about the stepfather, your sister and the disease is like a football in my stomach... and the name as a constant reminder. Great work

Glenn, You are gradually perfecting this style you have adopted--it somehow reminds me Charles Olsen's histrionic poetry--the blend of fact, with poetic image and the reality of prose. Smiles...>KB

That is a horrific story, goodness, shook me to the core... Those few lines describing your mother's day, her baking, waxing of floors, folding of laundry and then the courting of the husband. That's the heart of the poem right there, together with the last few lines and the senryu. A life of misguided sacrifice and your anger.

Oh how this gut wrenched me. And the style of the writing - punch punch punch and then the end of the last round - the last time coming out at the sound of the bell and the description of your mother - how that broke my heart. But the honor you maintained of keeping your mother's wish - the whole poem is about honor or lack of it - your mother and her daily duties, your stepfather's horrible perfidy, the senryu at the end. Excellent work. Good to see you step out of the political arena and show more of Glenn - the poetry becomes even more intense with the knowledge of this poem.

This just twisted at my heart. Life such never inflict such hardship on a young man.

Such a heart wrenching write.. deeply sorry for your loss.. please accept my deepest condolences and thank you for sharing with us.

My condolences on losing your mum at such a young age. You have captured her life and your own. This was a read i couldn't stop, the pain experienced ~ this tugged at my heart strings in so many ways Glenn.

Well..
first of all
this is beyond sad
of course.. as i for one
didn't have an expressing
Loving Father.. and a little
derogatory here and there..
is he.. but
my Mother is
All Love.. and
her children are
truly her first and
last Love.. although
there can be illness in
that as well..
per the
ability
to
leave home..
Tough Love is
important too..
but most importantly
is some Love at all.. and
you Loved your mother..
and that is still
key
i for
one see..
as well..
as we do have
control of what we give
back as free as Love can be..:)

This was one horror story. Made me tear up & pulled at my heartstrings. Thanks for sharing it with us, hope life has better things in store.

How many times does this play out in this world every day? Powerful piece!

Hats off to you, to express a whole ocean without saying much!!