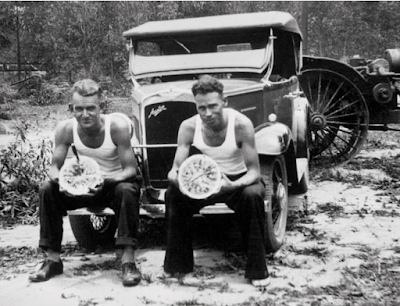 “In 1935, Sir Malcolm Campbell drove an automobile
at over 300 mph.”--Associated Press.

“How about that Babe leaving the Yankees for
the Braves?

How about Braddock beating Baer for the heavyweight
championship?

“I’d rather listen to radio shows.”

Have you heard this new guy--Bob Hope?

A Flash 55 for With Real Toads

Posted by Glenn Buttkus at 8:13 PM

There's always a choice isn't it.. I remember synth or rock'n roll... Maybe is always selecting....

Lots of contrasts in these paired yet opposing lines--showing us the past is not homogeneous predigested slop easily summed up in cliche, but a many faceted and complex, organic growth of interdependent/independent events, often set off by the individual. Thanks for the thoughtful response to the challenge, Glenn.

How interesting the past had been. Pairings could still happen even in contrasting situations. Lots to think on Glenn!

A super creative response--we listen to a lot of fibber mcGees I fear--where's Molly? k.

What a good slice of nostalgia.

I'm always in awe of how different minds group different events, how we are led to the same places via such diverse paths...

Fun – even though I don't have a clue who Fibber McGee and Molly might he.

It's nice to sit down with history. Your words made me feel like I was sitting with them. Love hearing you read your work!

Just getting around to commenting - busy times! This was great - a peak into 1935. People are like this today - some have no interest in politics - focus on sports or entertainment. Your reading made it all the more real to me. (Like how you do the different voices)