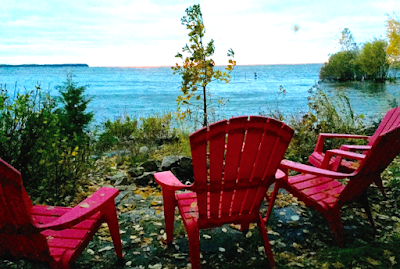 “I think history is continuous--it doesn’t begin or end
on Pearl Harbor Day or 9/11. We have to learn about
the past, but never be imprisoned by it.”
--Richard Holbrooke.

Four blood red chairs face the bay. Bob’s wife leaves them that way.
Bob had a tradition of meeting with three of his Navy buddies every
December 7th--since they were all Pearl Harbor survivors. They
started this getting together, this ceremony in 1960.

They talked about the curse of Seven, attacked on a Sunday, both
the seventh day of the week & the month, as seven battleships
were moored in a nice line like sitting ducks, and the first wave
of Japanese zeroes came in at 7:55 am.

Bob had been on the Nevada. It left its berth & made a break for the
open sea, but it was attacked & damaged so severely, it had to beach
itself. Danny had been on shore in the barracks, since his ship, the
Pennsylvania was in dry dock. He had been getting ready for church.
Joe had been on the Oklahoma, that was hit by several torpedoes &
was so severely damaged, it listed to port & tipped over upside down.
He had been beneath decks in the stern. Ten nightmarish hours later,
the welders opened up an escape hole for some of them. Harry had
been on the California--hit  by several bombs it remained afloat for
three days before it sank. He had been a deck gunner, & his crew
shot down four zeros to thunderous applause.

By 1990, it was just Bob & Joe left. They didn’t talk much, just sat
there staring off to the West, hardly looking at each other. Joe died
on 09/11/2003. Bob sat alone for a decade more, smoking his Lucky
Strikes, drinking a beer, & his wife enjoyed listening to him talking
boisterously to his three pals, all yakking it up like they had fifty
years before. Every year on December 7th, she thinks she can still
hear them faintly on the wind.

Posted over on dVerse Poets Pub for Haibun Monday

Posted by Glenn Buttkus at 1:48 PM

I like the way you were inspired by Pearl Harbor Day in this one. Definitely a day that lives in infamy. I had never heard of 'the curse of the seven,' so this was of interest to me. You wrote the day with a knowledge of history & made these men come alive. I smiled at Bob talking boisterously to his friends even after they had died. Doesn't seem impossible at all. Excellent haibun, Glenn. Really like the haiku.

Oh how I like this! I lost two great uncles that day, before the Sullivan act went into effect, one surviving great uncle on the Narwahl. One on Arizona another on the Oklahoma. This is a very poignant haibun. The four chairs left there as a memorial, like the ships - Arizona, Utah, Oklahoma. blood red overlooking the water. I like your take on this very much and find it particularly fitting considering the date today. All the ships that were there and the surprising number of those undamaged or with with minimal damage, not to mention the aircraft that day. That holy wind did indeed blow hard with a true vengeance that day. Good tight haibun, almost terse but with a wistful edge to it. On my mother's side, all Navy men and smokers of Lucky Strikes and drinkers of scotch because it was so cheaply and readily available from the Brits wanting American dollars. This haibun brings up many memories of sitting around and listening to all the stories.

Such a good take on the prompt and so appropriate for today. There are so few survivors left...one from the Nevada was featured in our paper today or maybe yesterday. So many events that have changed history...

Sea stories.. art of story taling..
where bombs make friends
forever in heArts sTill
of men courageous
enough to stake
stand
in sands
of free.. then..
bits and bytes
of Television
stray minds
no longer
now deep
in stories
of human soul..
with eyes that
no longer
can
see even
lies on bits
and bytes
of lips that
will to control..
away
from
free.. the loss
of the human story
is perhaps the greaTesT
Loss of all of human being..

I love the backstory of these soldiers sharing war stories and forming a tight bond ~ The sadness is palpable at the end, with the last survivor talking about his friends still, and keeping him company I bet ~ There's a lot of happy memories with those 4 chairs, even when its now empty ~

Great story of brotherhood, Glenn! I like how you weave history into poetry and it is never dull. I wonder whether this kind of reunion is something veterans like to do.

Military men have a bond like no other. Their circumstances have brought them together under such a specific duty to which they seem to remain tethered to the rest of the lives. Nice that they had each other to reminisce with for all of those years. I like Richard Holbrooke's quote...so very true.

Oh so much you could say of such a memory... But at the end most stories of the last big war is empty chairs.. Would we ever listen to them when we talks of war again?

Perfect timing for December 7th! And yet another sterling haibun to the prompt. You do bring in the weight of history so well...

How a powerful experience can keep an individual locked in a time gone by! Frightfully real.

The historical happenings are extremely well woven in with the story behind the empty chairs. A touching piece.

Many members of my family were in that war. It's very personal to me. I think we are forgetting and sometimes I think that's good but other times not so much. Your poem was meaningful to me!

I'd try to blame the tears on the spicy hot chili I'm eating for lunch as I read this, but I don't think anyone would believe me. This was powerful and so well written. Peace, Linda