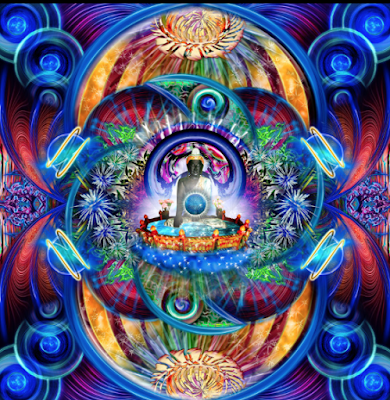 “We must let go of the life we have planned, so as to
accept the one that’s actually waiting for us.”
--Joseph Campbell.

Yeah, it’s two a.m.
in Sin City, as the twin moons of March
hiss like licorice lawn sprinklers--
it’s all swamp gas & maple syrup sweetness
there in the cobblestone alley, where
the blasphemous bricks babble Beatles’ tunes
from their Caucasianist album & the red-velvet
cake dumpsters love to perform chest-bumps &
French-kisses, spilling
their left-over pizza crusts &
Chinese food that always tasted
like Syrian kerosene when you
touched them.

Bobalina’s Bistro-Club & Pub                     opens up just as
everyone else is closing their
joints down. The door marked
THE DAMNED is illuminated with sticky
sheets of firefly nipple-honey, slathered
on so thick that it sounds like a wet
weasel tail to the casual touch.     It is 10’ wide & 3’ tall,
just off the alley, where the back
is the front, & easy to hear for all
the hippest trolls, those churlish
children of the night, appearing
still-born & anxious
out of spinning shadows     that felt like warm ice-water when
someone passed through them,
where a hundred angry voices,
clenched like a cocaine fist, were
launched from three dozen pie-holes
baking up bombastic bacon-wrapped
ballads & herring-soaked hirsute hosannas
as smug hyenas in beaver top hats & cork
boots banged their long silver wallet chains
in the pious piss-puddles adjacent to the exit
where everyone entered.

I’ve heard through the juicy peach that the juke opened up in the
late 40’s, financed by Holocaust survivors, & rapidly became the
club of choice for a lot of the sad Beat Poets, who readily admit
that all their best poetics were first carved into the men’s
room stall doors with dull carrot stilettos, with many of their
wurst-words transcribed into hand-stitched burn marks on
the rough underbellies of laughing purple loaves of Russian
Rye, that still lurk crucified on bloody nails in the nameless
dark passage ways, unnoticed, unless some silly customer
wants to use a flashlight as a microphone, or lights up a fat
doobie with a WWII Zippo, always hearing that tell-tale click
that tastes like a chocolate carbuncle drenched in lighter fluid.

Poets find their own
inspiration in the odd
corners of chaos.

Posted by Glenn Buttkus at 7:20 AM

What a great foray into that underbelly of a sad underbelly...Many great synesthesia .. the taste of chocolate in the sound of zippo-lighter... and yes I agree, inspiration for poetry can be found everywhere¨.

OMG, you have overwhelmed me with so many unlikely images that work so well and agree with Bjorn...although I live in NV, Vegas is probably one of my least favorite places on earth. You are a master of incongruity, of synesthesia and imagination. No surprise, there.

This is a bombardment of all the senses, from sights, to sounds to smell ~ that must have been some room and back alley of words, all breathing of fire ~ The list of poets in the end made me smile ~

This really gave me a vivid picture of Vegas, Glenn. A bit romantically nostalgic, but also more wild than I ever experienced or ever hope to experience.... Very subtle use of synesthesia - kind of gets lost in the drama, which is a good thing. Smiles. This definitely is a performance piece par excellence!

This is a well written, wild ride.

Glenn, You have manage to built a tangible world from all the detritus of life that passes by unseen except by one sitting closely in a corner seat on a bus driving through peoples life and your own as well. Kudos. I really like this piece--particularly you last prose section describing the 'poetus chaoticus' that ensued to blossom into its own kind of garden that is still blooming.Especially likes your tiny ending. And the reading as always superb. Smiles...>KB

Oh, man...this was so good. You brought me right into that dark alley, and that club, with the beat poets. I would have loved living back then to see such a thing. I love hearing your reading of the poem...reminds me so much of the old radio programs and the film noir movies. Thank you for sharing.

You never fail to amaze me. First of all I love the neon-lit-up-Buddha photo...sure, Buddha belongs in Sin City, and love the quote by Joseph Campbell. This is a stream of consciousness of a magnitude completely out of my realm of creation, which is what makes it so compelling and fun to visit over here. Las Vegas and I would not be a good match...

As Victoria says," You are a master of incongruity, of synesthesia and imagination." My mind boggles at that recitation - crazy

Well.. sMiLes.. my friend..
i have been to a place
of zero meaning
and purpose then
and now i arrive
at a place of
all meaning
and purpose..
and hell yes..
the second
place
is so
nice to
be for here
for now.. wheRe
it all means
a great
deal
to me..
who cares
who listens
as long
as there
is purpose
and meaning
in life.. poeTry
is in the
poET..
my friEnd..
Glenn..:)

Wow...I christen thee, Werewolf of Tacoma - arrrrooooooo - with your howling, wailing, strutting poem. This takes me back to when I was a wild, bold young thing screaming into microphones to a crazed bunch of poets and friends - nearly suffocated by the blue air of cigarettes and hand rolled thingies. From rambling jaunts through the verbal universe to now, a tightly controlled arranger of words, as I would do moritsuke. Your poetry makes me want to be young again and lose control in a torrent of words. Watashi wa anata o sonchō

synaesthesia be blowed: this one is scary, incredibly vivid use of language. Kudos.

These are my favorites:

"as the twin moons of March
hiss like licorice"

"like a wet
weasel tail to the casual touch"

"I’ve heard through the juicy peach"

"Burroughs had sex
with Siamese twin typewriters while munching on black meat" ... Actually, that whole last stanza, plus the haiku, just really amp me up. Fantastic poetry, Glenn.

I love this, especially the audio! Everyone else has said it well, and I choose the same quote as Shawna did as faves; but moreover, the glib, rich, raucous language, telling it like it was, took me there. I've never been but I could taste, smell, and see everything as if it were right in front of me. Combining the history with Joseph Campbell and bringing it to a close with such aplomb with the "make it so"...and the last line, of course, was heroic! Bravo!