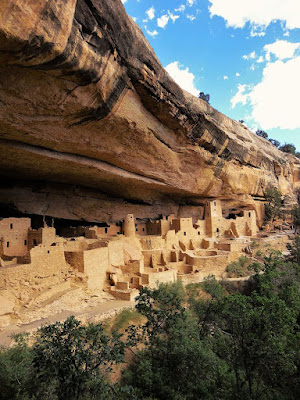 “The flute is a heart song, like a
sweet prayer.”--Kokopelli.

Not far from Four Corners monument,
I crossed into Colorado and drove up a
steep winding road for miles, emerging out
onto a pine tree forest on a high plateau
called Mesa Verde--named by Spanish
explorers in 1776, while America struggled
to become a country in the east.

This National Park was created in
1906 by Theodore Roosevelt, who was
the father of our park system. Indians lived
there in 7500 BCE, up to 22,000 of them, finally
abandoning the area in 1250 AD after years of
drought, warfare, & even cannibalism.

The park is huge, with over 600 cliff dwellings
preserved there. with names like Fire Temple,
the Palace,
My young wife was able to climb        Spruce Tree House,
up & down the very steep stone         Square Tower,
steps so she could get close               Oak Tree House, &
to the sandstone villages, but              Sun Temple
I had to skirt along the jagged
edges of the cliffs, watching her with powerful binoculars.

This gave me more time to study all the petroglyphs. I
fell in love with the rock art star who appeared countless
times--the hunchbacked insect-like flute player called
Kokopelli, a god of agriculture, a fertility deity with
feathers or antenna protruding from his head, a spirit
of music, & a trickster god. 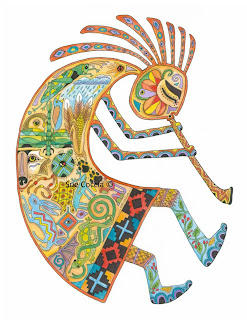 I always learn something new and amazing from reading your words, Glenn!

It sounds like a fabulous place, I think I will have to add it to my "list!"

I love the format you used and the word-weaving and formatting that takes place to echo those jagged edges...you gave us some visual poetry as well.

I did so enjoy my visit to Mesa Verde too, and ever since I remember Kokopelli... a great first

I would love to visit this park and see those images up close ~ In my older years now, I am more appreciative of nature and her gifts in each season ~ Love the quote and title, smiles ~

I so enjoy Native American Lore and one of my bucket list items would be to visit the 4 corners. And to take in the art in Taos.

Great halibun. I too learn a lot from reading this piece. Thanks for sharing. :)

A wonderful first experience and it looks like a magical place. Your haibun is beautiful and I have learned something new about Mesa Verde.

How wonderful! Under the sun, a new and unknown (to me) universe. Thanks, Glenn. I learn something new when I come to your blog.

This is beautiful, Glenn. When I was 11 and 12, we lived on a Navajo reservation in Rough Rock, Arizona. I remember this place, and the whole area, very well. Canyon DeChelly was a particular favorite. Very cool piece, about some amazing American history.

The "rock art star"...love that. When I met my husband in New Mexico, I also fell in love with these little charmers.