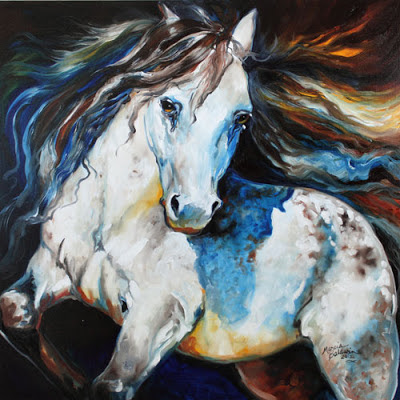 “What is called resignation is really confirmed
desperation.”--Henry David Thoreau

1(sound cue) blues guitar slide.
2(close-up) Bronson smiling--showing his teeth.
3(medium crane wide shot) above & behind the
three horses in the corral. Buck is walking toward
them. Bronson is dismounting from his palomino in
the background. Johnny is moving now, falling in
behind Buck.
4(reverse crane shot) above & behind the men.
Buck stopped at the pole gate, fiddling with the lariat.
5(sound cue) piano & banjo.
6(medium close-up) Buck, his face rife with stressed
resignation.
7(close-up) the face of the stallion--Chatawa.
8(two-shot) Johnny catches up with Buck. They both
stand for a moment with their arms over the fresh
poles.The men, all walking their mounts close up
behind them.
9(close-up) Johnny, over Buck’s shoulder:
A sad fucking day.
10(sound cue) Indian branch flute.
11(close-up) Buck, over Johnny’s shoulder:
Today, we choose life. There will be another day when
we will have to speak with our guns.
12(sound cue) Voice-over, Bronson: Come on, fellas.
Let’s get this transaction over with.
13(two-shot) Buck & the Eagle exchange a look.
14(close-up) Johnny: Let me do this, my Buck. Keep
your rope. Chatawa is still wearing the one I gave him.
15(close-up) Buck dropping the coiled lariat over a
fence pole--the sun made it shine golden yellow.
16(sound cue) French horn & harmonica.
17(two-shot) angle on Johnny as he climbed over the
make-shift pole gate, landing in the dust on the inside.
18(medium close-up)  Chatawa raised his gorgeous
head.
19(medium wide shot) the stallion trotted half the
distance to Johnny. The rails filled up with Bronson &
his men.
20(three-shot) Bronson & two of his wranglers.
21(tighten to a two-shot) a cowpoke to Bronson:
Damn my soul--that is one beautiful hunk of
horse-flesh.
22(medium close-up) Bronson: A solid observation,
young Chet. We’ve been chasing this phantom for
several months--and now, here he is.
23(medium wide-shot) Johnny bent down & plucked
up a fat handful of bunch grass & held it out in front
of him.
24(medium close-up) Johnny: Apologies, Chatawa,
our courtship was very brief, & there will be no love-
making. I will not be the one to ride you first. You
have to leave with these men.
25(sound cue) saxophone & snare drum brushing.
26(overhead crane shot) Johnny begins to move
toward the great spotted stallion,
27(reverse shot) behind the Eagle as he gets nearer
to the Appaloosa, The stud stood very still, keeping
his eyes on the men at the rails. He raised one hoof
several times.
28(sound cue) the two mares nickering.
29(two-shot) Johnny stopped right in front of him,
offering up the sweet dewy prairie greens. Chatawa
accepted the grass & munched it down. While gently
petting his neck, Johnny bent down & swooped up
the loose end of the rope.
30(close-up) Buck’s face, his eyes moist.
31(overhead crane wide-shot) Johnny led the stallion
toward the gate.
32(sound cue) guitar strumming.
33(wise-shot) behind Johnny, seeing the wranglers
sliding out the fresh-cut poles of the gate.
34(medium close-up) Johnny, over Buck’s shoulder:
How do you like that, boss? He’s gentle as a mule,
after he tried to stomp the crap out of us yesterday.
35(medium wide shot) Johnny handed the rope to
the young wrangler.
36(sound cue) snare drum baps & coronet blast.
37(medium wide shot hold) Chatawa erupted into a
gallop, dragging the cowpoke off his feet. Men jumped


out of the way in five directions.

Posted over at dVerse Poets Pub OLN
Posted by Glenn Buttkus at 6:45 PM

Oh I love this... I guess a stallion like this will chose its rider not the other way around. So at the end the bad guys will not win... i look forward to the next installment already.

I totally enjoyed the ending to this saga. And yes, the horse will definitely choose!

Oh, such a treat I was just thinking of this series today and now look here is segment 58 of the saga.

Apologies, Chatawa, our courtship was very brief, & there will be no love- making. I will not be the one to ride you first. (or will he) the spirits are connected.

You always know the right music to insert..you had me on the blue guitar slide :)

A stallion on the run and all those instruments in song... life is made up of little details!!!

It looks like Chatawa was smart enough to trick them.

is it wrong that I hope Chatawa dragged that guy to his end? ~

Great story. Wonderful how you pull the reader right in.

Soooo late to the reading. Apologies. Bermuda is too beautiful and calls me away from my screen.
But to this one I say, YAY Chatawa!!! Misspelled probably here - apologies. But I was reading with my breath held and was THRILLED to see him bolt and drag that man :)
I await the next installment...:)