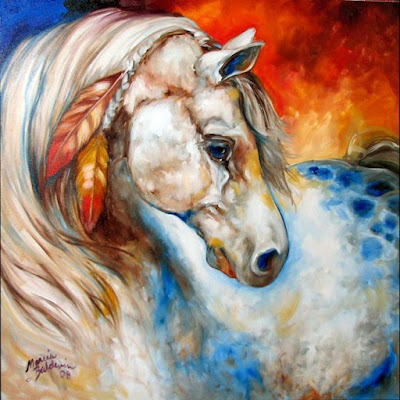 “A peace is of the nature of a conquest; for then
both part nobly, both subdued & neither party
loser.”--William Shakespeare.

1(medium wide crane shot) Chatawa bucked and
kicked his rear hooves into the angry air. The young
cowpoke was still hanging onto the rope, but was
being banged up--Bronson’s wranglers were good.
They sprung toward their horses. The old one
mounted up.
2(jump cut close-ups) Men grabbing their rope spools
--their horses dancing nervously--the young cowboy
trying to get to his feet.
3(sound cue) Chatawa voicing his frustration, his hard
hooves clattering into the ground over coronet & drums.
4(medium wide-shot) in slow motion---Chatawa’s
muscles rippling, mane & tail flying as he leaped and
bucked and spun. Two of the wranglers were now
mounted, one was on his feet--with whirling rope loops
whooshing over their heads.
5(medium close-ups) A whistling loop went over the
stallion’s head, then another, while another snared one
of his airborne rear legs. Chatawa fought them, his eyes
ablaze, foam at his nostrils--until they pulled him off his
feet.
6(medium wide-shot) Chatawa going down to his knees,
then pulled over onto his side with a great cloud of dust
erupting beneath him.
7(two-shot) Bronson & Thor up against the corral--Cash
with his hands on his hips & Thor pumping his fists in
excitement.
8(jump-cuts) the mounted wranglers busily wrapping their
ropes around their pommels, cinching up the slack--the
mares in the corral terrified--cowboys clinched jaws--
Buck & the Eagle’s consternation--the young cowboy
on his feet, putting his back into holding his rope--
Chatawa fighting to his feet, kicking the rope off his back
leg, then majestically rearing up on his back legs, pawing
the hot air, screaming in fury.
9(sound cues) blues guitar licks over French horns.
10(close-ups) Buck open-mouthed with tears on his cheeks
--Johnny as silent as a stone.
11(medium wide shot) Chatawa seeming to calm a bit as
the wranglers continued to wrap-cinch the slack.
12(close-up) the young cowboy whooping in victory.
13(two-shot) Bronson walked over to Buck, then pulled off
the leather glove on his right hand & extended it.
14(close-up) Bronson, over Buck’s shoulder : I’m impressed,
Mr. Buck, both with the horse & your excellent judgement.
Believe me, you did the right thing here. Now let’s shake
hands like honorable men. No hard feelings.”
15(close-up) Buck, over Bronson’s shoulder. It was obvious
that he was at one with the ferocious anger in the stallion
and Johnny Eagle--that at that moment he would have
preferred to plant a rifle butt into Bronson’s smirk, but instead
16(two-shot) he reached out and firmly shook the baronic
rancher’s had, without a word, without emotion.
17(medium wide shot) Chatawa fought against the tethers,
attempting to rear up again, but the pokes had him fully
secured. He was going nowhere.
18(medium close-up) Bronson: A piece of advice though in
regards to the future. You need to keep a leash on this Indian.
He’s scorpion mean & he might lead you down the wrong
path. I hope you & I can be good neighbors. I don’t want
trouble, but as you can see, when it comes down to the nut-
cutting, I don’t shy away from it either.
19(extreme close-up) Johnny’s eyes, brimming with rage.
20(two-shot) Buck, over Bronson’s shoulder: He’s my man.
He won’t do anything that I don’t want him to.
21(close-up) Bronson: Well, young sir, that’s good enough
for me.
22(medium close-up) He pulled right glove back on, and
mounted his regal palomino, swinging his heavy frame up


into his Spanish saddle, his silver accoutrements clanking.

Posted over at dVerse Poets Pub OLN
Posted by Glenn Buttkus at 12:25 PM

I wait the moment when revenge is coming... somewhere I hope that Buck will get his stallion back... good neighbors, I doubt it.

very graphic and powerful in imagery

I have missed so much of Blackthorne Glenn but still love to read your words. They remind me very much of the cowboy books I used to buy and read when a young thing.
Kind regards
Anna :o]

I just looked at all the stuff on the side of your blog - 2007. Ten years. That is a long time. I hope Buck gets his stallion back.

Such a glorious painting you have chosen as an accompaniment to your magnificent Blackthorne series. Love the progression in the story here, excitement is mounting as we proceed❤️ Thank you so much for your lovely comment on my poem 😀

Love the action and held back emotions here Glenn ~ I tried to imagine how it would look like in the big screen, smiles ~ Thanks for the chapter ~

I can't wait to see all of this on screen... amazing detail.

I had to come over and read your installment. Your lens works magic and takes the reader right there. I can feel a storm brewing down that dusty trail. Meanwhile there is a spirit that remains untamed and will have a say.

I hope Buck gets Chatawa back. I hate the thought of that handsome stallion being roped and wrestled by the cowpoke. I love the way you weave in the sound cues, Glenn, which I can hear as I read. I cheered at Chatawa 'fighting to his feet, kicking the rope off his back
leg, then majestically rearing up on his back legs, pawing the hot air, screaming in fury' and felt for Buck 'open-mouthed with tears on his cheeks'. I would like to 'plant a rifle butt into Bronson’s smirk'!

Nice detailed description of the actions. You must be very familiar with this subject matter.

Oh my gosh -- I am soooo relating to Chatawa. I HATED cowboy movies and tv shows when I was young because I couldn't stand those scenes with the horses riding fast and buckling under and falling to the ground imagining what the riders had to do to them to make them do that. This is a cruel cruel scene. You MUST save him, Glenn.
Wow -- your writing has really rally pulled me in!!!! I'm afraid to read the next scene 😳