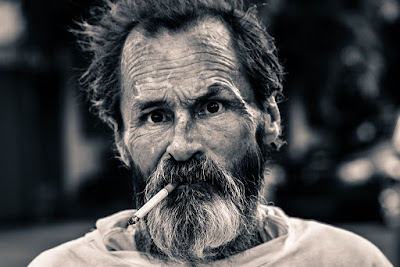 “Most people who appear heartless are just
protecting themselves from more pain.”
--Sonya Parker.

Homeless ain’t what it used to be.
too many families now--he thought,
lying on a bench in a tiny urban park,
staring up at lighted windows in many
apartments; his brown paper sack
wrapped around a tall bottle of
Thunderbird beside him.

Alcohol had ravaged his body,
destroying the vigor of yesterday,
attacking his weakened heart and
several other organs.

He tried not to blame her, but there was no
disputing that she had shredded his heart
more than a decade before. She lived in that
corner apartment on the third floor in the old
Chestnut Arms right across the street. He lie
there, his breath a ragged, fetid, malodorous
rasp beneath the brittle bones in his chest,
almost alive, but closer to being just a dried out
husk barely covering the rot within.

He was with Sadie now, who always
found a way for them to get wine--in
a crowded dangerous homeless camp
under the 410 freeway. She knew where
he was this Valentine’s Eve--below Kate’s
window, hoping to get a glimpse
of the brave woman who had once
loved him, booze & all. Their son
had died at three, and so did their
marriage. He had crawled inside a bellicose
battalion of brown bottles, She divorced him
& moved on to a new life. She had three kids
now, had married a carpenter.

Christ, a carpenter, He always chuckled when
he thought about it. He used to be a car sales-
man when he still had a life. His old patter, con,
smile & personality kept him out of trouble for
several years--but one dark morning he realized
all that had abandoned him too. Joy became a
dream bitch, not real, like all those young women
he saw on the streets. He became a thief,
a thug,
a mugger &
a felon.
There was this man he had robbed for thirty bucks
several years ago, who had been seriously injured.
His street name became Mac the Knife. He tried not
to think about it. He knew he wouldn’t last another
year--which released him from worry.

Broken hearts, like can-
cer, have their own agenda;
never a good time.

posted over at dVerse Poets Pub
Posted by Glenn Buttkus at 12:18 PM

This is an amazing character study. So many incredible lines of description that are gritty with their reality.
"but closer to being just a dried out
husk barely covering the rot within."
I especially liked this line.
The plight of the homeless.....so many back stories we never know or will know.

There is so much more stories in tragedies than any normal life behind the blinds... he might be a thug and drunkard, but his end is sad... as his life

I really liked this piece Glenn. It struck me like an old black and white photograph would.So many grades of shade. Wonderful stuff.

This is such a sad story, it reminds me of all those faces with their hidden stories and reminds us that there is always heartache as well as love. Perhaps heartache is a form of real love.

This is so cinematic, Glenn. I could see your homeless man in my mind's eye and I don't think I can shake the image.
It's strange, when I lived in London I'd see people like him every day, even in Norwich, but out in the countryside they are few and far between. I used to talk to one homeless guy who slept in an underpass, even shared my lunch with him, until Social Services found him a small flat - then I didn't see him any more. I hope that things worked out for him.

Wonderfully intuitive. I will think of it every time I see someone homeless and hopeless. They were young once, with all the dreams and hopes that go with youth. So many stories....... Great read!

This is incredibly worded, Glenn, the descriptions are profoundly vivid and apt!

This is a great story Glenn and I appreciate the details from where he was before and where he is right now ~ Cancer breaks us all, never a good time ~ Happy Hearts Day ~

Spent some time with the homeless..
under bridges and sleeping
on beaches
in warm
weather
south.. often
run off by the law..
what i've come to find
is.. it is the small group of humans
who stick together for a forAge of
liFe who
kNow
each
otHeR's
souLs
wiTh
no restrAint
of texting twitter heARTs
with little characters oF aLL..:)

plays of fate...every face we see out in the streets may have strange stories...I always wonder about this...loved this ..great!

Powerful stuff here, Glenn.
"Joy became a
dream bitch" is the crux of it, for me. Well done.