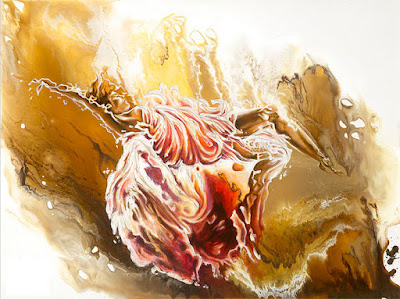 “Art! Who comprehends her? With whom can one
consult concerning this great goddess?”
--Ludwig van Beethoven.

It was the late summer of ’68.
I was getting out of the Navy, even
though the war in Viet Nam was still
raging on. A week before my discharge, I was
enjoying a halcyon late afternoon high
up along the Angeles Crest, leaning hard
against a red-barked jack pine,
like the ones you see on Bonanza,
partially napping while peering out over a gray-blue
noxious smog cloud that mantled the
cites below, slowly turning golden red
from California sunshine, beginning to
look like napalm, like the zealous
spark in Charlie’s eyes as he rushed
over our deadly concertina wire while
we barely slept, hugging our rifles and
whispering our mother’s names.

I was lulled into floating
in some kind of honied
mist, propelled by warm currents, paddling in deep
champagne, bubbles rising
like schools of wishes, when
I first saw her, dropping
down in sensual descent
directly in front of me, her eyes closed, her long blond
tresses floating provocatively,
reaching back up the surface,
with some kind of pink chiffon Grecian dress swirling
and billowing around her
like a randy parachute, her ample breasts partially
exposed, her long naked legs
undulating slowly.

She was a dream girl,
a mermaid,
a silkie,
an apparition, but somehow emanating a
tragic sadness, appearing joyous, lusty,
but with a tinge, a vibe of suicide.
I awoke with a start and a snort,
as if I had not been breathing, and
found two red & black Monarchs fluttering,
perhaps mating, on my face. Taking a
moment to regain my bearings, her
features seemed etched into the
scarred chambers of my soul, her
presence was palpable. I witnessed her
opening her eyes in my mind, and
they were violet-green. She cupped
her breasts in front of my lips,
brushing her nipples across my mouth
as gentle as dove’s wings

Who the hell was she--a portent,
a herald.
a warning,
a messenger, or
a succubus,
a demon,
an angel or
spirit guide?

I got to my feet & shook off her wondrous hold on
me, grabbing her sweetly but firmly in my trembling
hands before flinging & releasing her out into the
cerulean-blue sky that framed the Sierras.  As I
headed down to my SS Impala awaiting me, I felt
stronger, lighter, enriched--even
loved.

Golden goddess poised
in a daydream, touching me;

Oh how I would love to see this as a painting, a triptych perhaps. Last night I had the strangest dream I ever dreamed before....this puts me in mind of that old song.

Love this... the contrast between the soldier, and her, like a goddess or a magical being, or something else... but maybe it's fantasy that saves us from reality sometimes.

I would love to hear you reading this, Glenn - it needs a male American voice and I have a female British one. it would make a great short film, too. I'm glad you reference Bonanza as it helps me picture the scene, having been a huge Bonanza fan back in the day. While all the other little girls at school were made for Little Joe, I really liked the actor Pernell Roberts, so I was an Adam fan, with Hoss coming a close second. But I digress. This is so surreal and trippy! Reminds me of Kurt Vonnegut.

I can see how that experience would make one feel loved.

Glenn you have fed us a mighty meal here! I will need to feast on this over the coming days but on first take this is a great tale ~ the contrast between soldier and the image in the painting is seismic ~ I love the counterweight of that. Great piece.

Oh my...I'm right there...stunning descriptive prose and so deeply linked to the image you portray and the one you posted...you did well to release her...real well.

Made me think of this legend http://www.crystalinks.com/buffalocalfwoman.html

Kim & others perhaps. I did read this aloud--which I often do--just click on the pic at the bottom. I love it when any of you take the effort to record yourself reading your words aloud--like attending an open mic performance

I got it to work! Now I know what your voice sounds like! Brilliant!

I specially like how you described her: emanating a tragic sadness, appearing joyous, lusty, but with a tinge, a vibe of suicide.

Oh, my heart what a wonderful thing to experience. Trippy as one said but obviously it made a lasting impression. Lucky you to be so visited.

Some dreams or dream-states stay with us forever; my post is about a dream I had the other night.
She is luscious and dreamy, and set against the back story of the horror of Vietnam, I sense the danger, grief, isolation.. as well as the intimate connection with a girl who seemed real, visited you, and left you with a smile. Nice going, Glenn.

This is excellent. . . enjoying a halcyon late afternoon high
up along the Angeles Crest. . .loved this line!

Tears i"beginning to
look like napalm, like the zealous
spark in Charlie’s eyes as he rushed
over our deadly concertina wire while
we barely slept, hugging our rifles and
whispering our mother’s names.

How do you write like this? It slices into me.

"beginning to
look like napalm, like the zealous
spark in Charlie’s eyes as he rushed
over our deadly concertina wire while
we barely slept, hugging our rifles and
whispering our mother’s names."

And again I'll write, how do you write like this? It slices into me.

Awesome squared! Your poem reads like an old detective fiction book, all torn up and stained. Loved it.

During the harshness of war, a dream like that must have been a much needed release of tension.