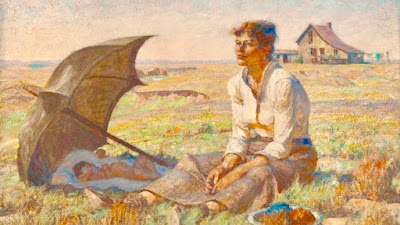 “Love must be learned, then learned again and
again--there is no end to it.”
--Katherine Anne Porter

1(low angle two shot) Buck headed for the General
Store. A lot of people were in the street.
2(medium close up) Johnny: Try and stay out of
trouble, Boss. I’m trotting off to Mateo’s. He
appreciates me.
3(medium wide shot) Buck waved consent without
turning back. I’ll join you later.
4(sound cue) piano and banjo over the sound of his
heavy boots rumbling across thin boards.
5(cut to medium close up) Two crow cronies huddled
on top of the store’s false front, watching the crowd.
6(low drone medium wide shot) pans over the black
birds, revealing the street below. Buck picks his way
around three men, and enters the store.
7(cut to store’s interior) Buck opens the door and steps
inside, closing it behind him.
8(sound cue) jingle of bells on the door over the low
hum of the customers.
9(reverse shot) Buck’s back to the camera. There were
a dozen people inside, standing around, looking at
new plows, firearms, and bolts of polka dot material.
10(wide two-shot) Wallace was there, his fluffy white
hair a rooster tail in back, helping a young woman,
folding up a denim shirt, wrapping it in brown paper,
binding it with green fuzzy twine.
Buck: Morning, Henry.
Wallace, looking over his glasses: Hey, young Mr.
Buck--what do you need on this busy day?
The young woman with an old weathered face and
a blue frayed cotton bonnet, paid for the shirt and
moved on.
Buck: Provisions, tools, lumber and paint.
Wallace: Your same basic chuck?
11(sound cue) bells on the door over harmonica.
Buck: Uh-huh...but a lot more bacon this time. Damn,
we do like your bacon
Wallace: A fella out on the flats raises pigs; that
would be a hell of a life, raising pigs.
Buck: Rather him than me. Have you got a good axe?
Wallace: Over there in the corner, by Salina. Go pick
one out. The lumber’s out back.
Buck: I’m going to need some barbed wire too.
12(two-shot) Over Buck’s shoulder; Wallace stared at
Buck for a moment, the hint of alarm on his face:
Sure, sure--I think we have everything you need. Let
me get started on your grub, and I’ll be back with
you in two shakes.
13(sound cue) violins and piano; sweet chords.
14(medium wide shot) Buck strolled past the farmers
and ranchers over to Salina. She was helping an older
woman understand how to operate a new kind of butter
churn. She looked up at him and smiled.
15(two-shot) over Salina’s shoulder, Buck: Your Pop
says that there are some axes over here.
16(close-up) Salina, her eyes sparkling, her tresses
pulled back into a bun. Yes, Mr. Buck, they’re right
behind me, in the corner, mixed in with the shovels.
17(two-shot) Old woman: Thanks for showing me this
new fangled thing; like to have one. Maybe in a few
months I’ll be back and buy one.
Salina: You’re very welcome, Mrs. Robertson. Maybe
by then it might be on sale.
Woman: That would be peachy. You have a fine day,
Salina--and good day to you Mr. Buck.
18(wide shot) the woman made her exit, and Buck
touched the brim of his black hat. He had been
rummaging around in the garden tools, and had
picked out a sturdy double-bladed axe. He held it
out at arm’s length, feeling its heft.
19(two-shot) Salina turned toward him: Today is
Thursday.
Buck: All day they tell me.
Salina: It’ll be Saturday before you know it.
Buck: Uh-huh.
Salina: You know, he might kill you.
Buck: Who, your boyfriend Thor?
Salina: He’s fast; nobody faster around here.
Buck: That’s what I hear.
Salina: Did he pick a fight with you?
Buck: Uh-huh.
Salina: Folks in these parts think I’m his girl.
20(sound cue) six-string blues slide over seed rattle

Posted over at dVerse Poets Pub OLN
Posted by Glenn Buttkus at 12:46 PM

Ah, is the axe for the impending fight?! I wonder. Your screenwriting skills are wonderful — I always admire the perfect sound cues and the angles, making for an audio-visual spectacle while reading it. For instance, this bit adds into the feel and the atmosphere of it so well:
"4(sound cue) piano and banjo over the sound of his heavy boots rumbling across thin boards. 5(cut to medium close up) Two crow cronies huddled on top of the store’s false front, watching the crowd."

Is Salina a new character, Glenn? I can’t remember reading about her previously, unless I missed an episode. I do like that quote from Katherine Anne Porter and that it hinted at a forthcoming love story – a bit of light romance. I like the use of the crows to create atmosphere and the detail of the store interior.

Kim--Salina, as a character, was in the story several times early on. It is time to back off the inexorable tension to the upcoming violence, and explore a love interest. Salina is a strong and sensual woman, an interesting presence midst the bellicose events.

Fellow poets and dear reader, this cinemagenic Western saga now has 81 poems, strung out over a couple of years. I once took a couple of months reviewing the past episodes to get folks caught up. It is a brave thing, this opus, for me to write and for you to read. It's kind of like those serials published in the Saturday Evening Post. I do appreciate those of you who continue to enjoy the adventures.

I enjoyed this one so much!❤️ The sound effect of violins and piano i.e. sweet chords give an intense and wonderful backdrop as we witness the dialogue between Buck and Salina. Indeed, what is love? It turns our world upside down and helps explore a new meaning every time when we think we know it all!❤️

Oh I do remember Salina, I felt so much that there is a story here... am I thinking there might be a dance on Saturday... so much more to look forward here.

I missed Salina so I do not remember her but I like your explanation of her. Is it possible that the three of them will be making dances on Saturday?

Love the music building suspense. I am beginning to think you are living between two realities.

This is a nice change of conversation with an introduction to Salina. Liking the build up and tension underneath. Looking forward to the next installment Glenn.

Love it Glenn! I like that Salina seems not to be intimidated by other’s expectations and threats.