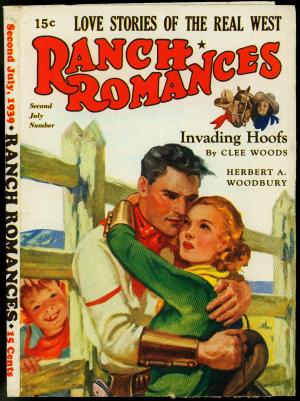 “Go to the poets, they will speak to thee more
of purer creatures.”
--William Wordsworth, THE PRELUDE.

1(two shot) Buck turned to her.
2(sound cue) piano and cello.
3(medium close up) She was sitting next to the
gnarly oak, her legs folded Indian fashion, her
hands in her lap, her eyes fastened on him,
wearing a small smile.
Salina: Why don’t you take your hat off and stay
a while.
4(return to two shot) He came to her.
Buck: Don’t mind if I do--whatever the lady wants.
He took off his hat, the rawhide strap dangling, and
placed it gently in the clover. She removed her black
hat with the tassels, and placed it alongside his; two
ebon head gear, his and hers, side by side.
Salina: Put your head in my lap.
He sat down--whatever the lady wants.
He turned over and rested his shaggy head on her
lap. He could feel the corset and her thighs beneath
her skirt. She smoothed his thick brown hair,
wrapping her long fingers in it, tugging gently.
5(cut to overhead crane shot, that descends slowly)
Buck: Thank you for lunch.
She touched his cheek, and then ran two fingers
over his full lower lip.
Salina: You are very welcome
6(tight two-shot) He sat up and faced her.
7(sound cue) violins and harp.
He took her hands, kissed them, took her forearms
took her shoulders, then held her face. Her jade eyes
met his blue ones. She kissed his hands. He put his
mouth to hers gently. She closed her eyes and
returned his kiss, open mouthed. She put her arms
around his neck, like a woman does. He put his
strong arms around her, and he held her. She
hugged him, and he could feel her breasts pressing
against his chest.
Her hair smelled clean and fresh, and faintly of
perfumed soap. He could smell himself, and he
lamented the work sweat he wore. She only
smelled a man. He ran his hands through her
long hair, rubbing her neck. She looked up, and
he kissed again, passionately. She reciprocated
his ardor. He unbuckled his gun belt, and
plunked it into a brass pile. She put her arms
around his neck again. She playfully kissed his
nose, his eyes, his chin, and his neck.
Salina, breathless: Careful, you keep this up, and
I may have to eat you alive.
Buck: I’ve wanted you since the first moment I
laid eyes on you.
Salina: If you take this ride, you may be sorry you
let me have my head.
Buck: Let ‘er rip. I’m pretty good at staying in the
saddle, and hell, I’ve been bucked off before.
Salina: So what are we going to do about this?
Buck: We could rut like rabbits, or back off and
pretend we’re both still virgins.
Salina: I think you know that the bloom’s off this
rose.
Buck: Nothing left but the hard pit on this cherry.
Salina: I could tell you though, it feels different with
us. You make feel unblemished.
Buck: Different?
Salina: I could tell you that you’re the one I’ve been
waiting for, that every man who has ever touched me
was just preparing me for you.
Buck: Pretty good line. I could tell you I feel the same.
Salina: Do you?
8(sound cue) piano and violins.
Buck: Two peas in a pod, twins.
Salina: Whoa Hoss, how about kissing cousins?
Buck: That works for me, time to fish or cut bait.
Salina: Well, hell--let’s get to it!

Posted over at dVerse Poets Pub OLN
Posted by Glenn Buttkus at 7:53 AM

Passionate and down to earth, all wrapped in one. Didn't know you could write this kind of action Glenn. I love the wordly experience, with a touch of wee bit of idealism. Great chaper, smiles.

Oh this was a sweet romance... somehow I think I will need some action (with a happy ending)... will Thor come and find them like this?

Poof on Thor. Glad Salina and Buck got down to it.

Whoaaa this is incredibly passionate with a cinematic touch, Glenn!❤️ I suppose it's about time these two got together! Loved the chemistry between Buck and Salina. Can't wait to read what happens next.

I love reading these segments. They're so engaging.

Oh I like the way the dialogue enhances the moment, bringing a hint of romance to the simplicity of the act.

I love the way you've painted this scene, so tender, and I've been waiting for them to get together.

So beautiful Glenn, This has such the feeling of love. It is just right, two people who we have come to know... and still the suspense, the challenge "Do you?" And the cute answer, she know he loves her, peas in a pod. Perfectly weighted Glenn, so much joy.

ha - They both desire each other and I enjoyed the tenderness of their touch, it's real and honest. I say get on with it indeed.

Interesting that you can create a romantic setting. "If you take this ride you might be sorry", especially if Thor finds out all hell will let loose.

Thanks dude, for sharing this next segment of your fine ongoing piece! See you in a couple weeks Glenn... :-)