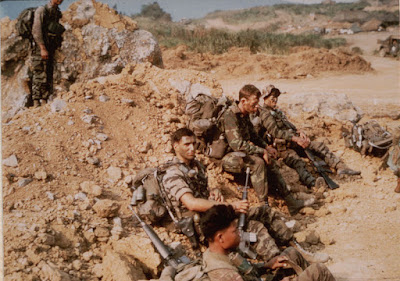 “You can kill ten of my men for every one of yours I
kill--but in the end, you will lose and I will win.”
--Ho Chi Minh.

In 1967, I was part of a Long Distance Recon Team
(LURP) in Viet Nam. We had been in the bush for
a month. My 6 man team was part of Tiger Force,
bad-ass paratroopers. I was a cherry, two months
out of the Recon school at Nha Trang.

My first encounter with the VC was only one week
in. I had slunk off into the jungle to take a wicked
crap. It was mid-dump when far away, an inter-
rupted cry became a fire fight. I found my squad
pinned down by a force of VC. using my BAR, I
was able to lay down a deadly crossfire that
turned the tide.

We had raided a village at 1300; our Charlie body
count was 41. Col. Morse would love that--he was
a mad dog motherfucker. My nightmares haunt
me still.

Posted over at dVerse Poets Pub FF
Posted by Glenn Buttkus at 1:47 PM

Riveting! So much laid bare in so few words. the tension, the climax and the fact that the story continues, still. Was this about you, by any chance?

You have captured the tension....frightening rhythm....horror....reality of the Viet Nam War. I am so sorry you had to experience this, Glenn. My dear cousin who came home from Viet Nam a changed man...stayed in his upstairs bedroom for well over a year...could never hold a good job after that....is now being paid the respect a Viet Nam veteran should have been given upon coming home....no matter one's political beliefs about that war. He is fighting a brain tumor (similar to McCain's and Kennedy's) and finally using the Veterans Hospital and Vets benefits he is so sorely due.
You've taken this prompt to another level, my friend. And oh how sorry I am that you can take it there....that it is within your realm of experience. Thank you for sharing, Glenn.

You are a master story teller Glenn - brilliant dude! Love this, very intense. I never got farther that 2 years in Infantry ROTC in college, The year I was supposed to up to enlisted, the lottery was announced. I labired over what to do for a solid month. I finally left ROTC and took my chance on the lottery. I really didn’t want to go to Nam as an college ROTC 2nd Lieutenant. If you didn’t get shot in belly by the enemy, you’d might shot in the back by your own men. BTW... if you’re curious, I just now posted a picture of myself on stage in 1965, with my “Doo Wop Warrior” piece, in response to this Prosery (rhymes with rosary) thing. I heard Morse was a motherfucker... :-)

Excellent story, Glenn. I love the language, the badassery, and the best is that last line. So evocative of the stories I've heard from that war.

Many of my relatives have gone to war for this country over the years. At least one didn't come back. Those that did were never the same. Thank you for sharing a story of survival and its aftermath for so many soldiers.

... it reads as if you were there. I bet you have heard many a tale from your buddies.

I though that was a bout you, before readi g the comments. Great piece of dramatic writing
Happy Monday

I’ve never met anyone who was in Vietnam, Glenn, and I didn't know much about it when I was a teenager, what with living in England, so I’ve only ever got one or two perspectives of it from TV and film. You’ve given me a bitter taste of it in 144 words.

I appreciate this personal retelling of your life Glenn. That must have been a nightmare indeed and I am sorry that it continues it haunt you still.

You weave an excellent story Glenn!

Glad to hear it was fiction, at least in your case. You are, indeed, a master story-teller.

Glad it was fiction... this could be real as it was I imagine it could be... entering villages especially chilling.

The action doesn’t always catch us with our pants up! It is a testament to your writing so many people thought it was your own experience. I always appreciate your wit and willingness to tell us the unvarnished truth, even in fiction.

Great flash fiction with just the right details to portray the scene. Seems nature called at just the right time for your protagonist to be position to save the day.