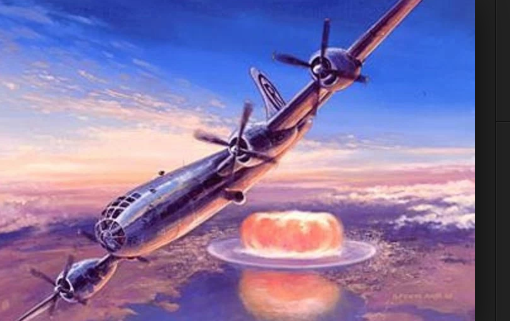 “Every positive value has its price in negative
terms--the genius of Einstein led us to Hiroshima.”
--Pablo Picasso.

On August 6, 1945, the population of Hiroshima were
about to meet the devil, calling himself Little Boy, a
never seen before uranium gun-type atomic bomb. He
was dropped out of a silver-plated war eagle, a Boeing
B-29 Superfortress, with the fetching name of Miss
Enola Gay.

At the same moment, fifty miles south, an American
POW (a soldier I worked with 40 years later), was
just emerging from the chow hut with some prison
buddies. Though many miles from the epicenter,
nevertheless, they all saw the flash, and witnessed
the terrible mushroom cloud rising up angry into a
ruptured sky.

None of them understood what they had seen. Five
weeks later, when they were liberated, they were
informed as to what it was. The veteran, who
became a science teacher, told me decades later,
“It was like watching the end of the world.”

Silver eagle flew
out of the sun, as Little
Boy devoured the war.

Posted over at dVerse Poets Pub
Posted by Glenn Buttkus at 1:15 PM

A riveting tale, and the ironic hint of hope concerning the war's eminent end in the haiku. A searing witness!

Full of facts but compelling none the less. The witness of your friend summed it up in a few words. The people I know who were smalk children at the time in Hiroshima said, their world did end.

Words escape on the impact your poem had upon reading. Your skill in "covering the bases" of one of humanity's greatest acts of evil, even as it was in response to great evil, is stellar, Glenn.

Unimaginable! Such a sad time in our history!

it was the end of the world, wasn't it?

The title struck me first, Glenn: ‘Gift’ in German means poison, and that is what Enola Gay was carrying. The quote you chose also struck a chord. As I read the prose, I heard in my head a documentary voice-over, factual and unemotional, interested only in facts – except for the personification of those deadly weapons in the names ‘Little Boy’ and ‘Miss Enola Gay’, which I heard with an ironic tone. The fact that you knew a witness personally makes ’watching the end of the world’ more real.

We tend to talk about the horrors of war as if war is a sentient being. It's salutary to remind us that war is conducted by real people, against real people, however much they are demonized.

Little Boy and Miss Enola Gay.....they sound like lovely sweet names from a beautiful fairy tale....instead of the horrific things they were. To know someone who bore witness......who did not know what he was seeing at the time....this is quite amazing.
As we toured Japan, we viewed the elderly with new eyes after our visit to Hiroshima. Perhaps one of the most powerful aspects of that visit were the video taped interviews we saw in the Peace Museum, of people who were children at the time...talking about how they and their friends and their family members were impacted. People bearing witness of one of the most devastating moments of war.
There is an "eternal flame" in the Peace Garden in Hiroshima and today many will gather to pray for everlasting world peace. I call it an "eternal flame" because that is what I learned to call the flame at JFK's burial site. The Japanese say the flame will be extinguised when there is worldwide peace. Is it then, an "eternal" flame?

That Haiku is stunning. The short prose informative, but that haiku got me.