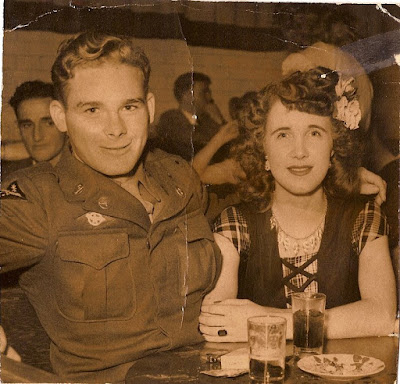 image from my family album

“He was the kind of person who stood on
mountaintops during a thunder storm in wet
copper armor shouting ‘All Gods are bastards!’ “
--Terry Pratchett.

Frankie and Betty were lovers for one
night, in the back seat of a black Buick.
They kept after it until they were done.
She was sixteen, he twenty--for kicks.
1943--young men used their dicks,

before shipping out to go to the War;
leaving the girls with gifts within their core.
Six weeks later Betty found out she was
pregnant, the airman gone--life a closed door,
with me in her womb, cupid’s sharp red buzz.

As fate would have it, the airman, already
engaged to someone else, was freaked out when
he heard about me, conflicted, unsteady,
he decided that I had never been,
that I would never claim that he was kin.

Mother married a soldier she also
was dating, telling him “baby in tow”.
So I was never a bastard, but then
I never knew my Dad, and had to go
Seventy Five years to find Dad again.

Posted over at dVerse Poets Pub "Forms"
Posted by Glenn Buttkus at 1:48 PM

Nice line: "leaving the girls with gifts within their core."

After seventy-five years what was done is still remembered and can be found out.

That is a sad story bro, unfortunately it happened more frequently in WWll than people may know. I hope your discovery of your birth fatther proved, if not positive, at least not negative. I was likely a WWll bastard, Never knew my birth mother or birth father. Don’t give shit now. Strong write here my friend.

Glenn, which dad is it in the picture? My mom worked as a roller-server at the A&W when my dad pulled up on his motorcycle. She was 20 and he was 32 and worked at the same factory as my grandpa. It was a similar fling-type-thing. As she began to swell, she would not tell my grandparents who the daddy was. Finally, down to the wire, she spilled his name. Grandpa went to see him in the shop and broke the news. Mom and dad were married one day and I was born the next. That's just one close-call story in my family. Sounds like this type of thing was happening quite a bit. Welcome to the world of human passion. Drop a bomb and live with the ripples for decades...

The clarity of your writing makes it easy to read as a story not as a poem. Flawless.

Great story well told. I’m glad the dizain form served you well in telling it, albeit a double dizain.

In the pic is my mother's first husband, Arnold Bryden. My mother died in 1966. In 1968 I figured out that Bryden was my first stepfather.Six weeks ago, thanks to DNA and Ancestry.Com, I was contacted by a new first cousin, and I found out who my real father was--Frank Pellegrino. He died 17 years ago. Most of my "new" family is too stunned to be welcoming, but we'll see. Hard for them to accept that I was Frank's first son and the first grandson.

There was a Frank Pellegrino who was an actor. He was our age. Dead now I believe. Wonder if you are related to him?

This is some personal share Glenn. I am glad that you had closure with who your really father was. The technology today of DNA testing is good. Thanks for sharing too the photo of your mom and stepfather.

Hi Glenn, your second link brought me here. Is that a mistake or have you revised the poem since the first posting?

Powerful poem, Glenn. This was a common occurrence at that time, as I'm sure it is before each war begins.