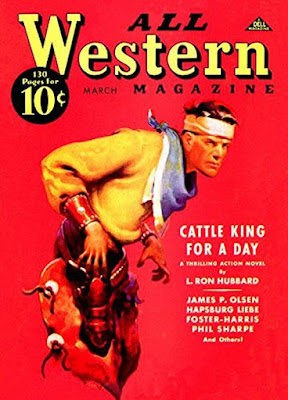 “It is only with the heart that one can see rightly.
What is essential is invisible to the eye.”
--Antoine de Saint-Exupery: The Little Prince.

1(sound cue) piano and violins.
2(close-up) Johnny, after an inhalation of pain:
If it comes to killing him, use a knife. A blade is
best. I want him to feel his own bowels, as I feel
mine, drop into his hands, just a steaming pile
of guts in the street, like butchering a boar.
3(two-shot) Buck: A knife it shall be.
Johnny: He runs.
Buck: El Blanco?
Johnny: Yes, and he is swift.
Buck: Will you chase him?
Johnny: I want to. I could catch him. I, too, run
like the wind.
4(tight close-up) Buck: Let him go, brother. He
will come again.
5(sound cue) guitar & harmonica.
6(two shot) Johnny, after a beat: Did I ever really
tell you about your father?
Buck: No.
Johnny: Why not do you think?
Buck: I never asked you about him.
Johnny: Then it is time.
Buck: after hesitation, If you say so.
Johnny: I do. Bill Buck...he was a man.
7(medium close-up) Buck, quickly: Whiskey
devoured him, drowned his heart, slayed his soul.
8(two-shot) Johnny: In the end something
destroys all of us.
Buck: So far, nothing really likes the taste of me.
Johnny: Even loneliness?
Buck: I am home now, and I am not lonely--I
have you.
9(close-up) Johnny: Me? I am nothing.
10(two-shot) Buck: No, sir, I will not hear you. You
are the Aguila, soaring over the land, and we
wither in the shadow of your wings.
Johnny: I will not die.
11(sound cue) accordion and banjo.
Buck: Die? Can they kill the thunder
storm? If you throw a rock at the sun,
will it go away?
Johnny: The sun is inside me now--
burning my bowels.
Buck: The Doctor will be here soon;
just hang on, my brother. I will not
let you leave me.
Johnny: We will have a grand rancho.
Buck: The grandest.
12(medium close-up) Johnny: We were
going to go and find you?
13(two-shot) Buck: Who?
Johnny: Your father and me; a week before
he was killed? He was an old man, and he
couldn’t travel alone. I was his amigo.
Buck: After all those years, why in Christ’s
name would he do that?
14(close-up) Johnny: You were his only family,
his son. He wanted to look you in the flesh, and
try to tell you how sorry he was, and to tell you
he loved you.
15(two-shot) Buck: Love?
Johnny: He knew he would not live much longer.
Grief was consuming him.
Buck was silent.
Johnny: In your family, you are the life force. Your
people were not strong. Death rode their shoulders,
rode them right into the ground. Sadly, they never
lived as we do. Life shines in us, even though now
it grows dim in me.
Buck: I will fan that flame.
Johnny: I am fighting. I hear the words from
my death song, but I won’t sing them yet.
Yet I have seen much. I rode hard.
Buck: You will ride again.
Johnny: Caramba...you would have to tie me on
a horse.
They both laughed, and it was difficult for the Eagle.
Buck: We are talking a lot. Does it hurt to talk?
Would you like to close your eyes and rest? I
promise I will not leave you.
16(sound cue) cello

Posted over at dVerse Poets Pub OLN
Posted by Glenn Buttkus at 3:48 PM

Hi there Glenn, here I am charging myself up on your vivid words. I especially liked : "The sun is inside me now--
burning my bowels." Stellar writing, my friend...

Oh this is so sorrowful... it seems like Buck has a mission now, after this there cannot be peace.

But there has to some happiness in the end... or?

A gut wrenching write. You drew me in with this one. Encore!

May this season bring you Joy and Peace Glenn!

The intimacy here, the bond these two share, is a joy and yet makes my heart hurt. Please don't let Johnny sing his death song yet...

This is both beautiful and heart-wrenching at the same time, Glenn!❤️ Some unforgettable lines in this especially; "So far, nothing really likes the taste of me." Buck finally learns about his father! Can't wait to read what happens next.

Goodness this is so moving. The sharp emotions, and forces of life and death.

this touches the heart deeply. a powerful dagger made of words.

I like the conversation between Buck and Johnny especially these lines:
"Buck: So far, nothing really likes the taste of me.
Johnny: Even loneliness?"

Oh, how I love reading this series. After reading all the cowboy poetry recently I was hungry for another segment of "Blackthorne", you are a true wordsmith.

Can they kill the thunder
storm? If you throw a rock at the sun,
will it go away?