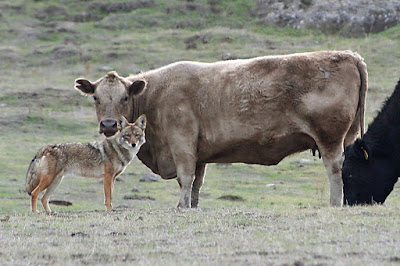 “In the desert the line between life and death
is sharp and quick.”--Brian Herbert.

From a moving car the Southwestern desert
looks barren, placid, even inert, but I took a
camera, built a sagebrush blind, and sat for
a whole day. I found that death sweeps over
the halcyon hotbed like a shimmering mirage,
rife with survival scenarios.

A Gila monster is climbing a cactus in pursuit of
bird’s eggs. Though it’s venomous, and marked
like a diamond back, it’s a lizard. A gray sand
spider is burying itself, preparing to leap out and
attack small prey. A pair of golden eagles are
swooping down and feasting on jack rabbits.

Suddenly a cow is screaming across the arroyo
nearby. She is limping, viciously pursued by three
coyotes, Her rear flanks are bloody from bites.
They quickly disappear behind a sand hillock.
Then coyote yips and whines fill the air. I guess
they met the herd bull.

Posted over at dVerse Poets Pub
Posted by Glenn Buttkus at 1:28 PM

I love this, Glenn. The beautiful imagery. So many exquisite details. And the drama of coyotes meeting the bull! What a great twist at the end.

This is stunning Glenn. So much packed into so few words!

From your description, I feel like I am right there seeing the landscape and nature's savagery.

I love this line:
"death sweeps over
the halcyon hotbed like a shimmering mirage"
We're all in a fight for survival, some of it more in your face than others. Such a well-articulated prosery, Glenn.

A lot of screaming between the cow and those coyotes. I like how you resolved the situation with the bull arriving.

Excellent. I live the details in this. Wonder why the cow was out wandering around in the first place.

Loved it! I knew you would deliver a great Prosery.

You certainly capture the desert, Glenn.

You drew me into the landscape and action immediately in the first paragraph, Glenn – the moving car is a literal and metaphorical vehicle! This sentence was chilling but wonderfully detailed: ‘I found that death sweeps over the halcyon hotbed like a shimmering mirage, rife with survival scenarios.’ I love the descriptions of desert wildlife in the second paragraph, and then the battle for life – hooray for the herd bull!

Well told. Survival has many faces.

And that's what bulls are for. I was with you all the way here.

The southwest with all it's critter and that sudden action of the cow and the coyotes... excellently captured.

If more people had time to enjoy such places for a whole day, I think our concern for the environment would be a force to reckon with. Beautifully written.

A wonderful story....and you've created the setting so well. So true that at first glance the desert is barren and inert. A closer look especially by a photographer looking for life, finds the ways of the dessert -- the life and death ways. And somehow, I'm glad the pursuers met the leading "bull" at the end. I do always root for the under dog .... er cow. Well done!


Again, and I seem to be doing this lots...apologies for the late reading. Time just seems to get away from me these days! :(