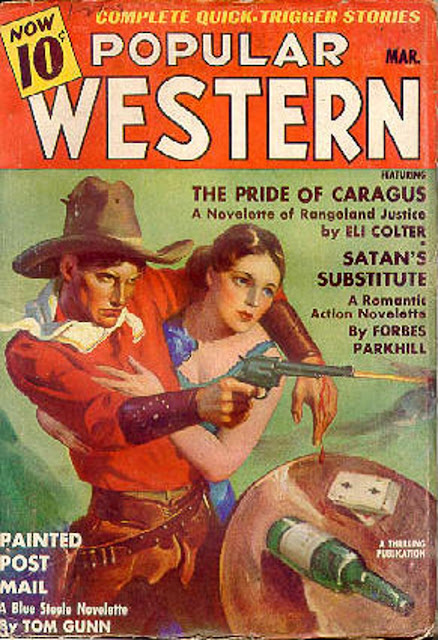 “I must not stand back shivering from the danger--
no, I must jump with gusto and scramble through
it as well as I can.”--Og Mandino.

1(sound cue) piano and guitar.
2(medium wide shot) Buck, Wallace, and Sheriff Hop
picked Johnny up carefully, and moved toward the
wagon. Doc Sweeney had arranged the pillows and
blankets by the time they reached it. They gently
placed the Eagle onto the low wagon. Buck got up
next to the Doc, as the four of them scooted him
all the way in. Doc slid a pillow under his head.
3(close-up) Sweeney: Damn it, his belly wound is
starting to bleed again. Hart, get over here. (to Buck)
We need to get a move on.
4(two-shot) Buck: I could drive.
Sweeney: No, it’s better if you take Salina, and follow
us in my carriage.
5(three-shot) Hart trotted up out of the darkness.
What do you need, Doc?
Sweeney: Johnny’s bleeding again. We need to
leave right now.
Hart climbed quickly up into the seat, unwound the
reins, and put his foot on the brake.
Sheriff (to Wallace): Henry, you go with them; just
leave your horse--we”ll bring it to town. Billy and I
will nose around, take a tally and meet up over
at the Doc’s in a couple of hours.
Salina gave her father a hug, and he got up into
the freight wagon. The blacksmith swung the pair
north, and started for town. Hop walked with Buck
and Salina over to the doctor’s carriage. As the
couple climbed up into the sleek black carriage...
Hop: Mr. Buck, please do me a favor.
Buck: What’s that, sheriff?
6(sound cue) Banjo and harmonica.
7(two shot) Hop: Don’t go after Bronson, until I
get back to town.
Buck: You’re asking a lot, Joe. If it was ordered
by him, if he sent these men, my blood will boil.
Hop: If he’s guilty, he’ll be ready for you.
I’d prefer that you don’t get killed before
we get to the bottom of all this.
Buck: Perhaps you’ve noticed--I don’t kill
easily.
Hop: If Cash sent these men to attack you,
he is desperate, feels his back is to the wall.
If you let me help you, your chances of success
will double.
Buck: Bronson dictates the law in these parts.
Hop: He thinks he does. But he seems to be
several cows over the line. If we prove him to
be guilty, I promise you I’ll take him to Silver
City myself, and you can shove him into the
prison wagon.
Buck, eyes meeting the sheriff’s: This is a big
step for you..but I have to say, you sound pretty
convincing.
Hop: The time is right.
Buck: Alright, I’ll do my best to wait for you.
8(sound cue) guitar blues riff and castanets.
9(medium wide shot) Hop stood there watching
them pull away, a coal black carriage rolling into
the black of night.
Hop: Billy, what’s the count?
Deputy: I count six so far.
Hop, sotto voce: And two more hunks of charr from
the fire makes eight; Christ.
10(sound cue) French horn bleat.
11( medium wide shot) cut to the travelers.
Buck caught up to the freight wagon below the great
boulder, halfway through the four bends. He and
Salina could make out their shapes in the ebon
shadows of the trees. The brake on the freight
wagon clunked, metal on metal, each time Hart put
his boot on it. The stars were clear, and there was
almost a full moon. When they rolled out onto the
flats, the moonlight was bright, and they had no
trouble staying on the road. The freight wagon
plodded along slowly. He could hear faint mumbling
on the night air. The couple were silent. Salina had
hooked her left arm in his right. She could feel the
muscles flexing as he handled the two-up pair.

Posted over at d'Verse Poets Pub OLN
Posted by Glenn Buttkus at 2:19 PM

I like how everyone is supportive and trying to do what's best, and that Salina is by his side.

A wonderful scene, Glenn. I love the sudden gentleness in these rugged men of the West in the way they handle the pillow....the placement in the wagon. And then, with those specific details and gentleness comes this line "But he seems to be several cows over the line" which makes me smile. I can see this dark night, the wheels turning, Salina and Buck together riding further into the darkness. And, as always, I love the insertion of the sounds.
PS: don't ever kill off Buck!!!!

I forgot how far town is from there, but I hope not too far. Johnny needs surgery quick before he bleeds out. I hope there were transfusions back in the day. I hope they are not attacked en route to town. Glad Buck will do his best to hold off on vigilante justice -- at least for now. Great writing as always. I'm invested in your characters.

what a refreshing change from our usual ... you have put a lot of thought and detail into this scene!

It is so long since I read Blackthorne Glenn and I am glad his adventures continue.
I used to love Westerns as a kid and would buy paperbacks at Woolworths with my pocket money.
I used to love the movies too unless John Wayne was starring, as for some reason he just got on my nerves.
Anna :o]

A much more gentle scene than some, Glenn. I hope Doc's skills can save Johnny! I like the last line where Salina hooks her arm in with Buck's for their silent ride back.

I came to dVerse especially to read your offering tonight. I knew you would post another segment and I enjoy these so much! I wasn't disappointed :)

I like how the sheriff convincingly reasoned with Buck.

i love this series and the details you painstakingly write, as each sentence is read I picture the scene more vividly and can almost taste the dust, there's sound, there's a lot of movement, and each character though briefly appearing pulls the story together. I miss Westerns, I used to watch High Chapparal with my dad a long time ago.

I love the prospect of the guilty being faced with prison and court instead of a shootout... sounds like the west is less wild (but a lot better)