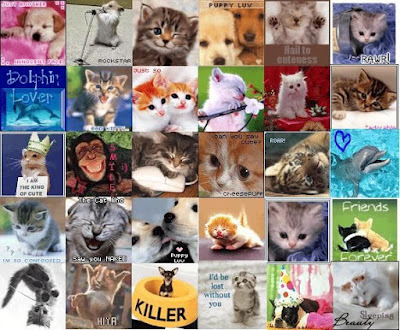 “No matter how much cats fight, there always seem
to be plenty of kittens.”--Abraham Lincoln .

A plethora of pets
loom large in literature,
films and television.

Arnold, the pig, on GREEN ACRES.
Potter had his owl,
Big Lennie had his pocket mouse,
after hugging a pup to death.
We all loved Lassie, who always
fetched help when Timmy fell in a well,
who was always called a good girl,
even though he was a collie in drag,
making me wonder why females
were not trainable.

Mister Ed was the TV version
of Francis the Talking Mule,
and Chill Wills did the voice work
for both of them. Nothing ever
comes out perfect. The Francis
series had six movies, the first five
co-starred Donald O’Conner, who
refused to return for the last one,
and so they used Mickey Rooney.

The Lone Ranger had Silver,
Roy Rogers had Trigger,
Gene Autry had Champion,
and all three horses starred
in their own comic books.

Rin Tin Tin went from being
a big movie star in the 30’s,
to being a TV star in the 50’s,
a pet to a precocious runt
growing up in Fort Apache.

There’s sled dog Buck
from THE CALL OF THE WILD,
and he’s had Clark Gable, Charlton Heston
and Harrison Ford as Masters, and I
understand that in the latest version,
Buck is completely CGI.

As a kid, I remember living in the projects
in the Renton Highlands, and the guy up
the street owned a fifty pound cat that was
the bane of all the dogs in the neighborhood.

And yeah, we loved our spaniel Taffy,
even though she became quite daffy
in her old age, going outside to pee,
forgetting why she went out, only to
come back inside and pee on the carpet.

Anyone who actually thinks they have control
over their mutt, has to face poop patrol.

Posted over at d'Verse Poets Pub
Posted by Glenn Buttkus at 1:20 PM

I enjoyed taking a trip down Hollywood's Pet Memory Lane. Lassy is the most vivid one of that bunch. I laughed at your story of a 50# cat bullying the neighborhood dogs. It's a good thing most cats are so small!

What a great list of companions you have compiled... but I found the memory of your demented Spaniel more real than those movie star animals

Smiles at "which made me wonder why females were untrainable". LOL. I enjoyed reading this and remembering all the tv critters I loved back in the day. Loved this, Glenn.

What a truly enjoyable read during these dark times Glenn- THANK YOU!

A nostalgic trip down Hollywood-animal-companion memory lane. But what about Benji? ;)

A marvel, for sure, but I, too, like the reminiscence of your own spaniel most of all. Wonderful!

I love your trip down the memory lane of pets. My favorite of all those you mentioned was Rin Tin Tin! Poop patrol indeed!

I loved that Lincoln quote Glenn! What a fun list of celebrity animals and companions. You left out Run Tin Tin, he was my favorite.

Loads of well-known tellie companions ... and you are so right about the poop!

Did you watch/read all those animal stories? Or look them up? Probably both - I recognized them all, though I quit animal movies a for a long time after Old Yeller. I don't think I've ever cried harder.

You took me on a walk down memory lane with this one, Glenn! I’d forgotten about Arnold the pig, and I used to love Green Acres. Mister Ed freaked me out when I was little, but I loved Silver and Buck from Call of the Wild. But I prefer real pets.