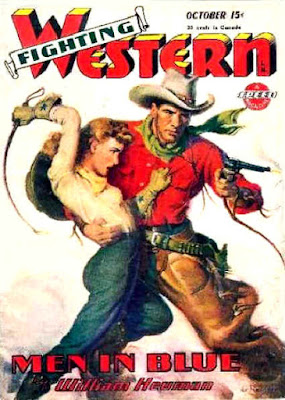 “A .50 caliber bullet can knock down an elephant,
and it can tear your arms or head off.”
--Ernest Hemingway

1(overhead crane wide shot.) Buck and the Indian
were on the floor. Buck was almost to the low
walled cubicle. The Indian crouched behind an over-
turned table by the door. He commanded a good view
of the room.
2(sound cue) saxophone and banjo.
3(cut to medium close-up) Thor was on his knees
behind the bar. He was wild-eyed and short of breath.
His bloody .38 was in his left hand. His right hand was
wrapped in a blue bandana.
4(medium close-up) Buck was reloading his sawed off
shotgun, patting  the row of green & red shotgun shells
that marched across his chest.
Wait a goddamn minute! cried out a thin voice from the
green sea of overturned tables.
5( voice over ) Buck: Wait for what?
I’m the banker’s nephew. Christ, there are a lot of
innocent people in this room. You bastards quit your
blasting long enough for some of us to get the hell
out of here.
Buck: My advice is to keep your heads down.
NO, nooo...I’m getting out! the voice wailed, as a slight
man in a black derby and a gray vest jumped up from
the right side of the room and began running for the
door. A dozen heads and guns bobbed up to watch.
Thor started the dance, standing up and firing his
Colt, and the slug ripped a hole in the table top near
Buck’s head. Thor got off another shot, his .38 barking
from across the room. Buck answered with the
Thunderer, firing twice just as the banker’s nephew
entered their line of fire. Thor’s bullet passed through
the man’s left leg, and he skidded forward onto the
beer-soaked floor.
6(sound cue) blues slide on guitar over harmonica.
7(medium wide-shot) One of Buck’s shots shattered
the huge mirror behind Thor, showering the gunman
with glass shards, and the other caught Thor in
the shoulder, spinning him off balance. He slipped
and fell, first against the wall, breaking a shelf, as
fifty shot glasses and two dozen dun brown bottles
of rotgut started their descent, as he dropped out of
sight, following all those glass corn flakes to the floor.
The wounded man squirmed along the floor, and as
he reached the door, a couple of men pulled him out
from beneath the swinging doors.
8(medium close-up) Buck reached the guard’s cubicle.
He pushed the dead man aside, holstered his sawed
off, and picked up the dead man’s pump shotgun.
9( medium wide shot) One of the shooters upstairs
behind the broken railing, made a rush for the safety of
one of the rooms. The Indian nailed him before he got
half-way, slamming a rifle slug between his shoulders.
The brigand went to his knees, and slumped over, his
carbine clattering on the hardwood floor.
10(sound cue voice over) Buck: That’s some damn
Indian .
11(medium wide shot) as the room erupted in gunfire.
The two men upstairs had Spencer .52 caliber buffalo
rifles, and they pinned down the Indian with terrible
.56-56 Spencer rimfire cartridges. Three men to Buck’s
left all had rifles. Two of them opened up on Buck, while
the third one slithered along the floor, between the table
tops trying to get a position of advantage.
12(sound cues) big guns discharging in a small room,
their firing crackling out into the street.
13(medium close-up) Big hunks of wood were blasted
off the table tops, off the sides of the cubicle, and off the
wall. The massive front window disintegrated and glass
blew all over the walkway. Buck wormed his way to
behind the gut-shot table, He caught sight of the gunman
on the floor, now thirty feet from him.He pumped three full-
load shells in that direction.
14( jump cuts) One hit the floor, coughing up splinters,
one hit the edge of a table, spinning it, and one hit the
gunman in the arm.
15(medium close-up) The man rolled over, his eyes
shocked, staring at an artery spurting blood down his
sleeve. Quickly he crawled away, seeking safety.  Buck
shot the man in the neck, and the gunman pitched over
onto the boards, his face buried in bloody poker chips.

Posted over at d'Verse Poets Pub OLN
Posted by Glenn Buttkus at 5:32 PM

Nice description at the end: "his face buried in bloody poker chips"

Whoaaa! This is so intense! I could actually visualize the scene where one of Buck’s shots shattered the huge mirror behind Thor. I wonder what will happen next!

I know nothing about bullets, but if Hemingway says a ‘.50 caliber bullet can knock down an elephant’, who am I to disagree? I do enjoy a good old saloon shoot-em-up, Glenn, especially when accompanied by saxophone, banjo, blues guitar and harmonica! But I wouldn’t want to be trapped in that bar. The detailed action and sounds, such as the ‘.38 barking from across the room’ bring the whole thing to life in my head. I love the phrase ‘glass corn flakes’. 😊

Is this the climax? so much blood and death, how can Buck ever live in peace after this.

I hope there will be some way to find a good end.

That CSNY song, "Long Time Comin" comes to mind here. And "a long time before the dawn." These men of the west don't play when it comes to a shootout! Wonderful graphic detail. I pray Buck and The Indian get out alive (and Thor dies, of course.)

No good guys when it comes to guns. I'd love a photo of the condition of that room.

I am afraid if this were showing in 25 cent matinee that it would have to be R rated!

All blood and gore Glenn. What will happen next?