Man With a Plan 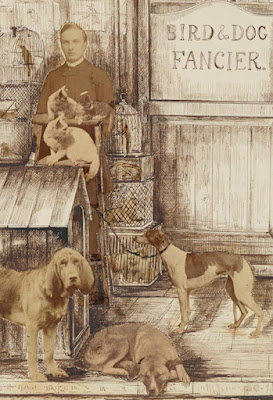 Man With a Plan

It was 1880,
and the journal Science was first published,
financed by Thomas Edison,
the Australian police captured outlaw Ned Kelly,
and P.T. Barnum and James A. Bailey
combined their circus troupes.

George Kellogg was a consummate animal lover.
He opened a small pet shop in Portland, Or.,
where Edison’s ship, the S.S. Columbia
completed its maiden voyage.

At first, George only carried dogs, cats, & birds;
from mutts to pure-breds,
from Tabbys to Siamese,
from Magpies to parrots.

By the second year his shop
stocked exotic snakes and rodents.
He became quite wealthy,
and he opened another shop
up north in Seattle, but it was a disaster,
closing down in six months.

Too many lumberjacks, seamen and roughnecks
up there, thought George; but the truth was
there were just too many
snake and rodent haters up there .

Kim Russell inspired me to write this and submit it
to Visual Verse; smile .

Posted over at d'Verse Poets PubOLN
Posted by Glenn Buttkus at 1:33 PM

I like how you set the atmosphere with historical tidbits before introducing the man with the pet shop. You bring this person to life! Congratulations on getting published in Visual Verse.

I wasn't published yet. I submitted this today, after Kim tipped me off to Visual Verse. It was just one of those impulsive creative things we poets do,

I’m so pleased you took the plunge and that submissions were still open, Glenn! I love the title and the way you set the historical context for George’s story. Made me smile.

I like this, Glenn, a picture of the times and a latter day entrepreneur!

... and back to Portland he went. Good choice says the lady who lives in Bend.

The layers of history work well with the image.

Oh, I like the history and the way its's told here. Glad you were able to post for OLN.