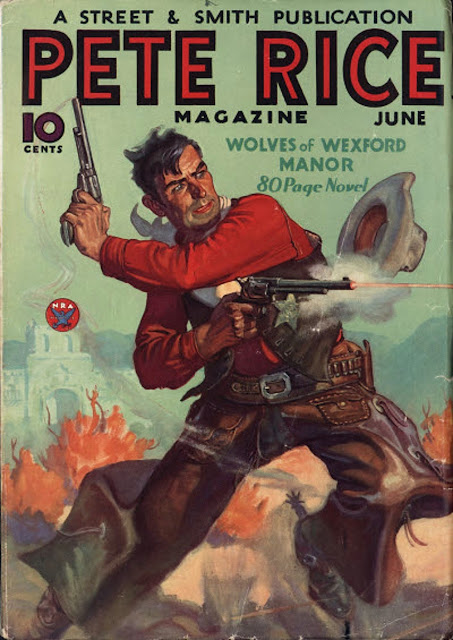 1(sound cue) snare drum and French horns.
2(medium wide shot) Someone’s bullet ricocheted
off a tall brass spittoon and broke off a section of
the huge crystal chandelier in the middle of the
ceiling
3(sound cue) Voice over, Fuck you! a gunman
yelled.
4(close-up) A Spencer .50 caliber slug tore through
the table in front of Buck’s face, and a wood sliver
stuck in his chin, splitting the skin. He plucked out
the splinter.
5(sound cue) Voice-over, Buck: You missed my
eye, asshole!
Blood dripped off his chin.
6(medium wide shot) One of the men to Buck’s left
popped up and fired his shotgun.
7(close-up) Buckshot tore up a floor divet next to
his boot heel.
8(cut to medium one-shot) Buck stood up, took aim
and retaliated with an angry pair of his own shotgun
shells. The hired gun did not duck in time, and Buck’s
bullets tore off his face and pulverized his head.
9(medium one shot) The big Indian swore as a fire-hot
Spencer slug grazed his ankle. He bobbed up with his
smoking Winchester, joining Buck. Buck fired twice, and
the Indian fired three times, his lever action a blur.
10(sound cue) the thunderous report of their weapons
intertwined over strident piano chords.
11(cut to medium wide shot) One of the crack shots with
the Spencers upstairs didn’t duck fast enough, and a
.30-.30 slug hit him in the hand, and the shotgun blast
hit him in the shoulder. His buffalo rifle spun to the floor,
and he went down on top of it, lying flat, shivering,
gripping his mangled arm with his good one.
12(sound cue) Voice over: Hold your goddamn fire
Buck! Someone’s voice blasted into the saloon from
the street outside. It was Sheriff Joe Hop.
13(two-shot) The gunfire stopped. Buck and
the Indian swung their hot barrels around to
cover the front door. Buck rammed four more
shells into his shotgun.
14(sound cue) Voice over: Are you in there,Thor?
was the inquiry from the darkness. It was Cash
Bronson.
15(close up) Buck’s face.
16(sound cue) Voice over: What the hell was Cash
Bronson doing here?
Joe Hop: Hold your fire, we’re coming in.
17(sound cue) guitar blues chord and harmonica.
18(medium wide shot) The Sheriff stepped through
the double doors brandishing his own scattergun.
Bronson walked in close behind him, his hands on
his hips, his Smith & Wesson holstered. Deputy
Billy, tall and lean, followed Bronson in. his Colt
in his hand.
19(medium close up) Cash surveyed the damage to
the room with a slow sweep of his eyes. Shaking his
head, he whistled low.
20(sound cue) Voice over: Is that you, Cash? called out
Paul Bronson from behind a door.
21(Medium close-up) Bronson: Yeah, Paulie, it’s me.
You can come out now. Get your butt down here.
22(wide shot) From the relative refuge behind
turned over tables, like prairie dogs after a stampede,
heads popped into view. Buck’s shotgun was still
smoking. The Sheriff took a step toward him. The
Indian still had his carbine leveled at the three
newcomers.
23(three-shot) Not so fast, the Indian said.
Sheriff: Tell your amigo to lower his piece.
4(sound cue) piano.
Buck nodded. The Indian lowered his .30-.30.
and the deputy clicked back to safety with his
pistol.
5(cut to crane wide shot) Paul Bronson
appeared at the top of the stairs. He was holding
hands with the fiery-haired harlot that he liked to
batter. She stood there with wide eyes, and a hand
over her mouth.

Am always amazed by your dramatic and scene led poems. And left wondering what happens to the 'harlot'.

I am always amazed at your instrument selection and how well it fits with a scene. I can vividly hear and see this play out.

I was literally starstruck when you were reading this one out loud on Google Meet today!!💝 Wonderful to meet you 😃 along with Bjorn and the others! It was such a warm and intimate LIVE conference.

Now this is what I call an action-packed sequence! I could visualize every moment especially; "(cut to medium wide shot) One of the crack shots with the Spencers upstairs didn’t duck fast enough." It's battleground right now. My money is on Buck!😃 See you after the break!

Such carnage! Tore his face off and shattered his head (iirc!) My heart lifted when Thor did not respond to Cash (the elder Bronson is named Cash -- how fitting) I trust Sheriff Hop right now but hoping he can be trusted to do the right thing here by not arresting Buck or The Big Indian.

Sorry I missed the videochat had to get my hair done after over 3 months of scraggliness!

Yeah, Lisa, sorry you missed the video chat; was hoping to meet you there.
Ah, Sanaa, you make an old man blush, it was wonderful to deepen our connection

This is as evocative and exciting as ever, Glenn. I laughed aloud at the image of the men rising “like prairie dogs after a stampede”. I too am sorry to miss out on dVerse’s first live chat but hope to catch the next one. We could all use a bit of poetry in motion and a connection to fellow poets lately. I’m watching Westworld and it reminds me of you.

It’s amazing to think that Blackthorn is at episode 118, Glenn. Reading it now is not the same as listening to your gravelly cowboy tones – I really enjoyed that. I would have like the incidental music too! I love the opening shot of the bullet ricocheting off the brass spittoon and breaking the crystal chandelier followed by the gunman’s expletive– so dramatic! No let up from the violence then. Buck and the Indian make a good team. I like the simile ‘like prairie dogs after a stampede’!

Love that quote. It explains a lot about human behavior.

VVasn''t this the one you presented at the meet? It is a great vvhole from tvvo, as I had hard time hearing you, but enough to get to vvest. And novv I got the vvhole picture, vvith your voice in my head as I/you read it.
VVonderfull! And it vvas a pleasure to "meet" and talk!